A coup in real time? Historian Timothy Snyder says the Comey firing is Trump's "open admission of collusion with Russia" 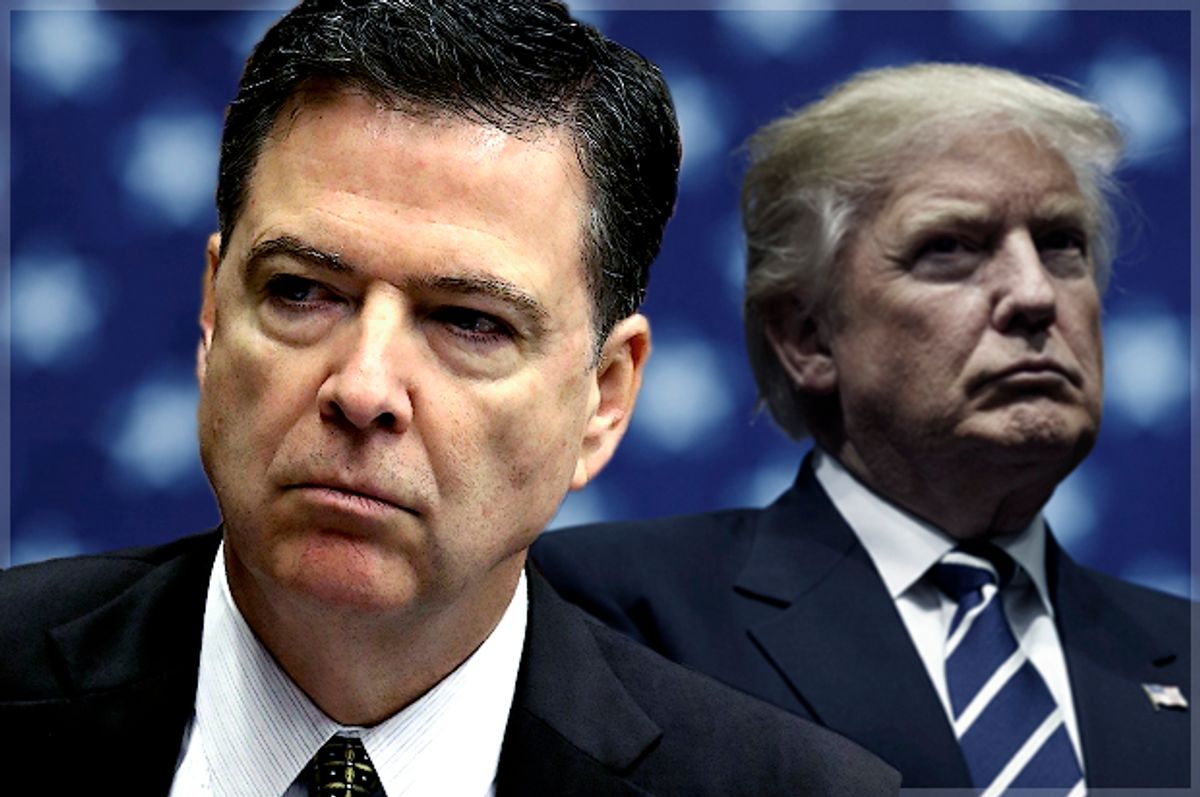 Has the other shoe finally dropped? Is this the beginning of Donald Trump's attempted coup?

Trump is a plutocratic authoritarian. As I have previously argued, it is fair to call him a fascist. He has repeatedly demonstrated this fact through his words and deeds both during the 2016 presidential election and now while serving as president.

Like the leader of a banana republic or a Mafia boss, Trump has surrounded himself with a small group of advisers and confidantes comprised mainly of his family members. He has contempt for journalists and the concept of a free press. He leads a cult of personality, marketing himself as an autocratic who will protect and defend his "forgotten Americans" against all threats foreign and domestic. Trump has no respect for the standing norms of American democracy. He and his supporters evidently believe that the rule of law does not apply to him.

Authoritarians are paranoid by definition. To that end, they ruthlessly consolidate power and eliminate any threats to their power. In keeping with this script, Trump fired FBI Director James Comey on Tuesday, in a hastily written letter of dismissal delivered to FBI headquarters by Keith Schiller, the leader of the president's personal Praetorian Guard. Comey's firing was also endorsed by Attorney General Jeff Sessions, a man who has no credibility after having been caught repeatedly lying about his own contacts with representatives of the Russian government.

Comey's dismissal comes one day after Trump appeared to threaten former acting Attorney General Sally Yates before she gave testimony to the Senate about Vladimir Putin's efforts to subvert American democracy and the dangers posed by likely Russian operative and former national security adviser Michael Flynn. Trump's dismissal of Comey came on the same day it was announced that a federal grand jury is investigating Flynn and his associates regarding their financial connections to Russian interests.

Trump's claim that Comey acted inappropriately in his handling of Hillary Clinton's email "scandal" is an obvious smoke screen. In fact, Trump repeatedly praised Comey's controversial decision to release on one of the last days of the 2016 presidential campaign a damning statement about Clinton's emails, which clearly helped Trump defeat Clinton and win the White House.

The president's decision to fire Comey is an enormous abuse of presidential authority. To all appearances, Trump is removing a threat posed by the person who is leading the investigation of his administration's (and his campaign's) possibly treasonous connections with Russia. Trump will now be able to appoint a political loyalist as Comey's successor.

For a widely read interview posted last week on Salon, I spoke with historian Timothy Snyder about what Trump's election means for America. (He is the author of the new book “On Tyranny: Twenty Lessons from the Twentieth Century.”) During that conversation, Snyder warned that the American people have less than a year to resist the creeping tide of authoritarianism embodied by Donald Trump's regime.

Snyder also predicted: Donald Trump will stage his own version of Adolf Hitler's Reichstag fire — a manufactured crisis or some other type of political or social upheaval — to enact a state of emergency or otherwise consolidate his power by subverting America's political institutions.

Is Trump's firing of Comey the next step in this direction? I corresponded with Snyder by email on Wednesday to learn his thoughts about this new development.

His "very first thought" on hearing the Comey news, Snyder wrote, "was that this was a far more open admission of collusion with Russia than even a confession would be."

Snyder also saw the Comey dismissal as a step toward Trump expanding his power, in keeping with a pattern influenced by Putin's Russia:

I wrote the first article about Trump and Russia 13 months ago, using Russian sources. The evidence has been overwhelming for a long time. I think it is only our basic desire to cling to some familiar reality that prevented us from seeing all this in 2016. The man shared his political advisers with the Kremlin and Ukrainian oligarchs. Trump owed his success as a developer to mysterious inflows of Russian cash. He won on the Internet thanks in part to Russian trolls, bots, and fake news. Some of that information war ran through Cambridge Analytica, where Steve Bannon was on the board.

Trump's first foreign policy speech was written by someone on the payroll of a Russian fossil fuels company. Carter Page was also working for the Russians. And that's not even considering what has come to light about Michael Flynn. Trump's son-in-law Jared Kushner failed to mention his own Russian contacts to get security clearance. Sessions also lied by omission, perjuring himself to become attorney general, about his Russian contacts. And on and on.

Trump's whole campaign was an imitation of Putin's political style, punctuated by pathetic appeals to Putin for friendship. This is what is known through English-language open sources. When you include that Russia has been carrying out operations to derail democracy and support favored candidates elsewhere, the pattern takes shape.

Snyder also said that Trump's recent moves are consistent with the predictions made in his book “On Tyranny":

First, the continued attack on truth, twisting it and undermining it. Using Comey as a source for his argument that he is innocent and then firing Comey. Praising and blaming Comey for how he handled the Clinton case. Undermining an investigation that is after a simple and important truth.

My Russian friends refer to agencies like the FBI as siloviki. The agencies that use force. For Trump to build an authoritarian state in the USA, the FBI must cease to be a police agency that investigates according to law, and become a top-down instrument of force: siloviki. That I think is what Trump would regard as normal.

Or to use the example of Communist takeovers: Communists always first went for what they called the power ministries.

Is firing James Comey Trump's Reichstag fire moment? Look, we have here a president with no interest in democracy and no popular policies to get him through 2018 or 2020, who admired foreign dictators and their approach to terrorism — which means their exploitation of terrorism to create an authoritarian state. That's the template Hitler left from his use of the Reichstag fire. But for that to work here, agencies like the FBI would have to go along.

I asked Snyder how the American people should respond. "Realize that the presumption now must be that this man is covering up a meaningful relationship with a foreign power that helped get him elected," he wrote. "Read the press. Pay for it. Support investigative journalists. Demand an independent investigation. Urge multiple institutions to investigate. Continue resisting in all other areas."

Former U.S. counterintelligence operative Naveed Jamali, author of the new book "How to Catch a Russian Spy," has also been trying to warn the American people about the threat to democracy posed by Russia's interference in the 2016 presidential election. In a phone conversation, Jamali connected Comey's dismissal to the unanswered questions surrounding the Michael Flynn case, saying the following:

Flynn was, in my opinion, targeted and recruited by the Russians and was in fact a directed agent. But that targeted recruitment happened well before he met Donald Trump. Sally Yates informed the White House of those concerns. Once you are informed of those security concerns, your duty is to remove those personnel who are under suspicion. Trump's decision to not do that raises serious concerns about his judgment, and frankly a lot of people will question if that event rises to a level where he should not remain president.

Keeping someone as a national security adviser — one of the highest-level Cabinet positions — when the Department of Justice and FBI present you with concerns that this man is a security risk, and to keep this person in place because of partisan reasons, questions Trump's credibility and ability to stay neutral. It is very simply one of the greatest impacts of the 2016 election.

What is not being discussed is that this is a breathtaking counterintelligence failure on our part. The Russians succeeded. That this is not being discussed is disturbing. I want Americans to understand that the Russians, Chinese, North Koreans or Iranians may use a similar tactic. We as a country have to take a stance like after 9/11, where we investigate and take a different posture more suitable for these new threats from abroad.

In total, Trump's firing of Comey, his hostility to an independent judiciary, his authoritarian behavior and his evident attempts to control or contain the investigation into his connections to Russia add up to a constitutional crisis. Unfortunately, Trump is being aided and abetted in his irresponsible, and perhaps even criminal behavior, by a Republican Party that, to this point, values power and partisan politics over loyalty to country and true patriotism. Trump's supporters among the American people are deeply devoted to their leader, even if that means siding with Putin's Russia and spitting in the face of American democracy. They are authoritarian lemmings.

While the supposedly "liberal" news media wrestles with its confusion about telling the ugly truth about Trump and the fascist movement he represents, the conservative media serves as Trump's personal echo chamber, much as Pravda and other state-sponsored publications served the Communist Party during the Soviet era.

Unfortunately, this state of emergency is the new normal in America. In the future, people who are now living will tell their children and grandchildren how they watched American democracy being surrendered to plutocratic authoritarianism and fascism in real time. These same children and grandchildren will ask, "Why didn't you do anything to stop it?" What will we tell them?

History is watching. The American people now have to choose if they will be bystanders or agents in their own destiny. I am deeply saddened that so many Americans seem ready and willing to choose the first option.