Call Jill Soloway's latest effort for Amazon a piece, a work, but it sure isn't a TV comedy 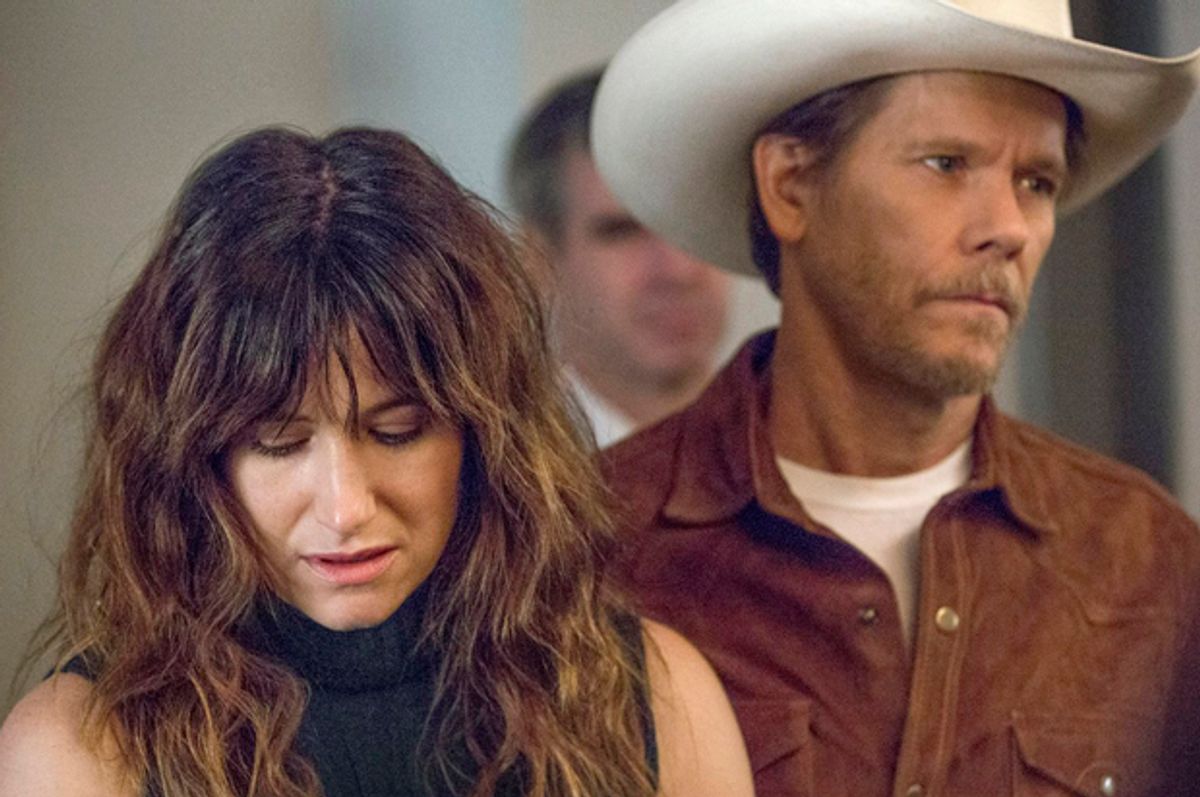 It may be helpful to think of “I Love Dick,” the new . . . comedy? . . . from “Transparent” creator Jill Soloway and playwright Sarah Gubbins, as a visual art installation — something to be considered, observed from various angles and pondered, not necessarily enjoyed, although that’s certainly possible. Some viewers may find themselves helpless before it, bingeing away in order to find some meaning in a continuous flow of consumption.

Therefore Amazon isn’t truly releasing an eight-episode series tomorrow as much as it’s mounting a new offering to Prime Video subscribers, one that happens to feature Kevin Bacon and Kathryn Hahn. Viewers may think they’re tuning in for that new diversion everyone’s been talking about and be shocked to discover that they’ve somehow been transported to some hoity-toity gallery in a quaint pop-up village. You know, one of those destinations where beautiful people in the know can disappear for few days to bump uglies in a boutique hotel and maybe catch a tasting flight of artisanal whiskey at the local bistro.

In case that description reads as incredibly pretentious to you, this is precisely my point. In a behind-the-scenes feature about the series, Soloway refers to her new work as “a feminist, matriarchal, revolution-inspiring comedy about love and sex.” I’d argue that three words in that description don’t quite fit. A person may take issue with that “comedy” designation, as I’ve established, but to call it revolution inspiring may be pushing it.

So yes, “I Love Dick” is a bit affected. Even so, doesn’t a horizon-expanding weekend getaway sound nice? And who doesn’t enjoy a craft cocktail every now and then?

“I Love Dick” is based on a groundbreaking, semi-autobiographical 1997 novel by Chris Kraus that circulated through the literary world and incited a lusty, somewhat underground fan base with a story of obsession and sexual desire that is unambiguously female and feminist. Springing from that idea, the driving philosophy of the series is to filter Kraus’ narrative through the female gaze. Soloway and Gubbins do this concretely by including work from feminist filmmakers throughout each episode.

Every installment opens with scarlet-red cards with declarations in all capital letters rendered in white, an homage to Barbara Kruger, one of many artists influencing the series’ look.

DEAR DICK, the first card reads. The next one says, EVERY LETTER IS A LOVE LETTER.

This kicks off the story of Hahn’s rendition of aspiring independent filmmaker Chris Kraus — no psychic relation to the actual author, apparently — and her older husband Sylvère (Dunne). The New York couple journeys to a remote West Texas creative colony called Marfa when Sylvère is accepted to a residency fellowship program run by celebrated visual artist Dick Jarrett (Bacon). Chris intends to leave Sylvère to participate in the Venice Film Festival, but when her short film is pulled she sinks into frustration.

Then Chris meets Dick Jarrett — casually polished, aloof, self-assured, dismissive Dick. Chris invites him to join her and Sylvère for dinner at a local gourmet restaurant, where Dick soon makes a show of belittling her and the merit of all art created by women as casually as he chews the rabbit he’s ordered. Why he chooses to demolish her is unclear. Perhaps Dick has no need to impress anyone and sees no purpose in grace or politeness.

It could very well be that when Dick and Sylvère discuss Chris’ worth as a filmmaker right in front of her, as if she isn’t there, he’s intentionally flipping her switches to inspire her. Maybe he’s simply living up to his name. Whatever his intent may be, Dick’s actions instantly alchemize Chris’ exasperation into a white-hot obsession directed squarely at Marfa’s hometown hero, and the action quickly turns strange.

Chris’ marriage initially benefits from her infatuation, but once it spills out their front door and into Marfa’s dusty streets her mania transforms into something more dangerous: creative expression!

Hahn’s Chris is an eruption of repressed madness born out of sexual starvation, and the actress conveys this with a seductive nerviness that propels her through the story’s greatest flaws — the most central one being that Chris’ relationship with Sylvère is the dullest aspect of “I Love Dick.”

Instead it’s Dick, and Bacon’s swaggering personification of Chris’ unfulfilled appetites, that makes this project palatable. Bacon allows his character’s imperfections to shine through even as he spouts definitive and oh-so-masculine statements such as “I’m post-idea,” declarations that tell us nothing about what makes this man tick. The actor makes Dick a tremendous canvas upon which Chris can project her naked cravings, simultaneously prodding the viewer to want to know more about his character and maybe less about his pursuer. This is either a strange truth to mull over, given the tale’s intentional filter through the female gaze, or precisely the point.

In either case, Hahn is at her most watchable when her maelstrom of feelings surrounding Dick, and her sexual desert of a marriage, and Marfa’s exclusive community tribalism, transform her into an animalistic wreck. With Hahn and Bacon at its fore, “I Love Dick” satisfies as a moving visual statement but after the second episode it all but ceases to qualify as a comedy series both in the classic sense or the looser modern definition of the term (that is, a half-hour drama that occasionally makes a viewer laugh, like “Nurse Jackie”).

That doesn’t make it unwatchable, mind you. Instead, think of it as an atypical viewing experience, a collage composed of cinematic aesthetics combined with elements of serialized television and indie film.

Fortunately “I Love Dick” is rarely boring, which is a worse crime for a television . . . whatever-this-is  . . . to commit than to merely infuriate as it engages. This may be art’s highest purpose, but you are in no way obligated to make a space for it into your home.