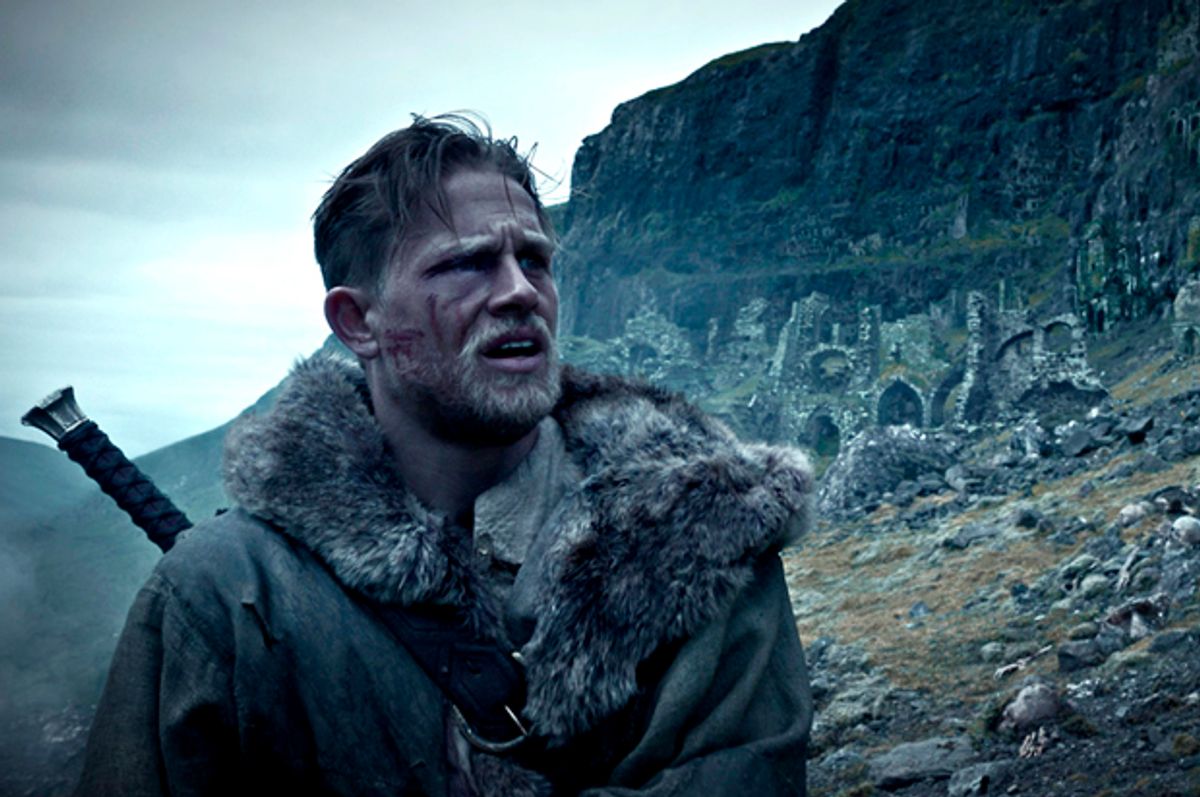 The umpteenth retelling of the King Arthur myth doesn’t even have the good sense to be bad in a fun way. And it's not like the screen was hurting for another telling of the Arthur story. We got one just over a decade ago.

At $175 million — just to make, not to market —the knights-of-old tale wastes a game cast on a film that is incomprehensibly filmed, sloppily edited, and visually abhorrent. When a giant computer-generated snake that appears plucked right out of “The Scorpion King” slithers into frame, it is actively difficult to keep watching.

Say what you will about “Heaven’s Gate,” the 1980 Western that has since become synonymous with failure, but it was made the passion and purpose to match the ego of its creator, Michael Cimino. Famously,  the director ordered that a tree be chopped down, moved to another scene, and then reassembled. He's been quoted as saying he wanted to break the record for the most footage ever filmed for a single movie. Cimino ended up with 1.3 million feet of it.

Guy Ritchie, who is most widely known for "Snatch," "Lock, Stock & Two Smoking Barrels," Robert Downey Jr.'s "Sherlock Holmes" films, and being Madonna’s ex-husband, lacks that fanatical drive that fuels truly epic filmmaking of both the good and bad varieties.

Really, shouldn't an adequate treatment of the Camelot myth have a certain sense of scope? Think of the mammoth sand dunes of David Lean’s “Lawrence of Arabia.” The landscapes in it are so longitudinal and rich that they need to be seen on the widest screen possible to appreciate their punishing beauty.

Ritchie, for his part, approaches the material with the grandeur of a Limp Bizkit video. His is a visual style so harried and frantic that it’s impossible to just enjoy the scenery.

The plot is, of course, familiar: A young boy becomes a king after pulling an enchanted sword from a stone, an act that announces his grand destiny. Although versions of the myth vary, the widely accepted version of the tale begins when Arthur's father, Uther, knocks up the Duke of Cornwall’s wife. Arthur, the bastard product of adultery, is raised by the wizard Merlin.

The Disney version made Arthur a sweet orphan boy, but in Ritchie’s tale, he’s a roguish knave who learns the streets after being raised in a brothel. Arthur (Charlie Hunnam) is basically every character you’ve ever met in a Guy Ritchie movie: a working-class lad who wants to hang out with his mates and enjoy some good-natured roughhousing. But the future king has a sensitive side: He cheats Vikings out of their coin so he can steal from the rich and give to the whores — that is, until he messes with the wrong goons. Fleeing the scene, he’s snatched up by a group of men hoping to recruit the heir to Uther’s throne. After a couple tries, Arthur frees the sword from its rock.

Given that the story is based on an ancient myth, the Camelot tale allows Ritchie some freedom to take liberties with the material. In his version, the sword-pulling is a ruse. Arthur’s vengeful uncle (Jude Law), Vortigern, murdered his father (Eric Bana) in a coup and wants to hunt down his offspring in order to ensure his throne. But if this supposed “fresh spin” on Arthurian legend  feels awfully familiar to you, that’s because it used to be called “The Lion King.” Law even appears to have modeled his character, a bored British dandy, after Scar.

But to call “King Arthur” derivative of just the "Lion King" would be selling it short. “King of the Sword” apes at least half a dozen other properties, including “Game of Thrones,” “Lord of the Rings” and Ritchie’s own catalogue. The film’s second act suggests a heist movie in the vein of “Snatch,” as a ragtag team of criminals team up to infiltrate the castle and overthrow Vortigern. But the director forgets to commit to his own ideas. Ritchie can’t even manage to rip himself off correctly.

The film is so narratively muddled that for a plot that’s already familiar, it’s difficult to remember what’s happening, who it’s happening to or why you’re supposed to care. Ritchie has almost no interest in his characters or his story, meaning that events often unfold apropos of nothing. Vortigern, sporting Eddie Redmayne’s eyeliner from “Jupiter Ascending,” murders his wife and later his daughter by stabbing them in the stomach. One assumes that these scenes are intended to indicate the depths of his wickedness, but they serve no real purpose. These events have no impact on the story and are never brought up again. Making him a Maybelline-loving puppy kicker would have been perhaps too on the nose.

Ritchie’s cast attempts to elevate the material, but there’s no raising a bar buried six feet underground. Law practically licks his lips as he chews the scenery, and even though the filmmakers give him nothing to do, Hunnam exudes the commanding presence of royalty. Given that the movie slaps him in a bomber jacket and a Nazi-hipster haircut, the fact that he’s an almost credible King Arthur says something of the actor’s talent.

The film around them, which has been pounded into a pulp by millions of dollars worth of bad ideas, undermines the cast’s efforts at every moment. Ritchie’s camera constantly does the wrong thing, zigging when it should zag. One scene treats viewers to a bewildering aerial zoom shot straight out of a bad video game. The CGI battle scenes are rendered unwatchable by 3D, which has a habit of making the characters look like cardboard cutouts in their own movie. There’s no grace or zeal to anything that happens onscreen, just the perfunctory dictates of a studio that desperately wanted its next mega-franchise.

“Heaven’s Gate” bankrupted a studio and tanked its director’s career, but it lives on in infamy. Indeed, "Gate" has undergone a full critical reappraisal in recent years, with some film historians declaring it a misunderstood masterpiece.

Infamy is about the best that “King Arthur” can hope for. As one of Ritchie’s young lads might say, it’s shite.