The veep may look like a tangential figure in the administration, but he's in the middle of this deepening crisis 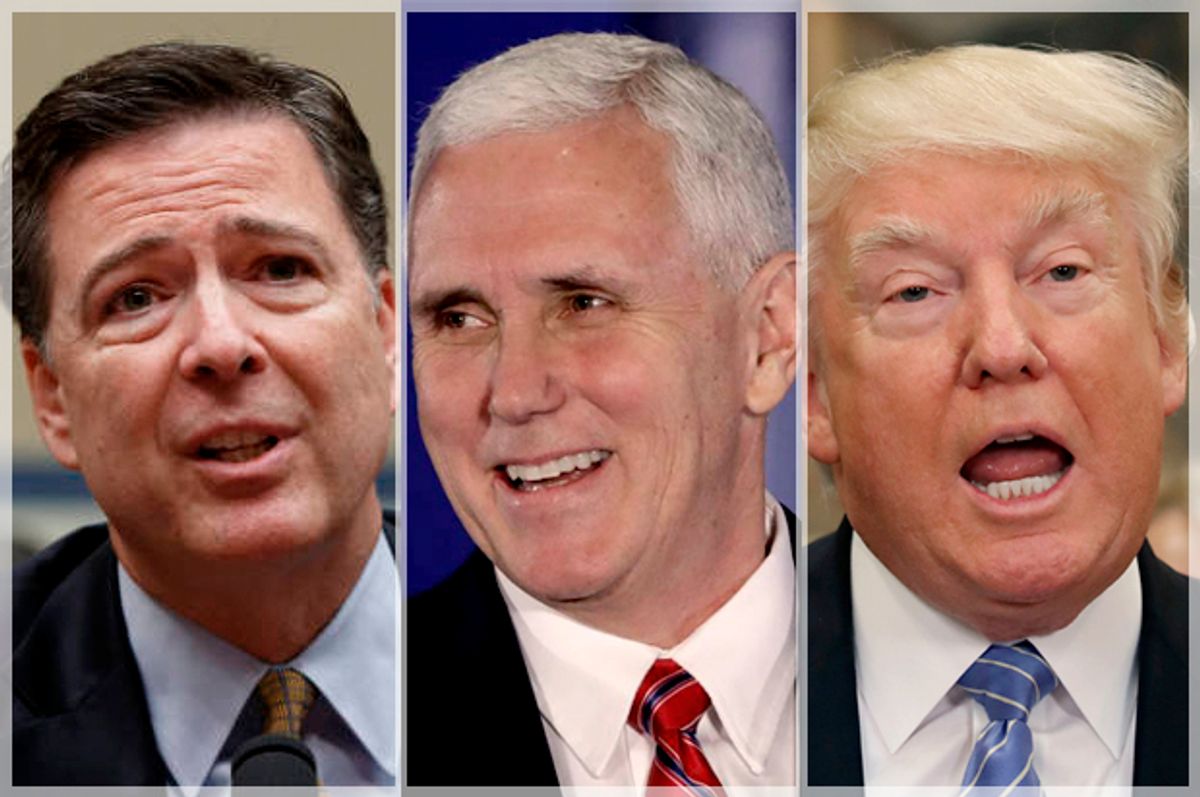 This has been a week that makes Democrats feel as if the world might right itself once again. President Donald Trump's abrupt firing of FBI director James Comey -- supposedly because of his unfair treatment of Hillary Clinton in the private email server case -- was so laughably ludicrous on its face that the immediate reaction was that the Republican line of defense would finally break down and he would finally be subject to serious bipartisan condemnation.

Whether that will actually come to pass remains to be seen. There have been some cracks in the GOP wall but it's too soon to know how far that will take them. The good news is that Democrats are unanimous in their outrage, even including such normally mild mannered types such as Virginia Sen. Mark Warner, who was ferocious in his criticism. That is an important element of any congressional action and it's never something you can count on with the Democratic Party.

Press secretary Sean Spicer told the media on Tuesday night that the firing originated entirely in the Department of Justice and when a reporter asked if that meant Deputy Attorney General Rod Rosenstein he said, "it was all him." The next day the deputy press secretary Sarah Huckabee Sanders appeared on MSNBC's Morning Joe and backed up that claim:

It's real simple. The deputy attorney general . . . made a very strong recommendation. The president followed it, and he made a quick and decisive action to fire James Comey.

Apparently, sometime between that interview and the daily briefing, Rosenstein complained to the White House about being the scapegoat when he hadn't actually recommended Comey's firing. Sanders scrambled for an explanation, saying that, actually, Trump had been thinking about dismissing Comey for some time but his thoughts had been validated by Rosenstein's opinion. Nobody much bought it but she managed to get through two days of briefings insisting that she was making sense.

But the man who really made the case to the press that the president was simply following the recommendation of the Department of Justice was Vice President Mike Pence, who couldn't have been more emphatic when he went up to Capitol Hill on Wednesday morning:

As has been stated repeatedly and the President has been told, he's not under investigation. There is no evidence of collusion between our campaign and any Russian officials ...

Let me be very clear that the President's decision to accept the recommendation of the deputy attorney general and the attorney general to remove Director Comey as the head of the FBI was based solely and exclusively on his commitment to the best interests of the American people and to ensuring that the FBI has the trust and confidence of the people this nation.

Unfortunately for Pence, the president's interview with NBC's Lester Holt on Thursday evening pretty much ended all speculation about why Comey was fired when Trump incriminated himself:

In fact, when I decided to just do it, I said to myself, I said, you know, this Russia thing with Trump and Russia is a made-up story.

Trump's stream-of-consciousness dissembling gave him away.

At this writing there is no word from Pence about his comments on Wednesday morning. He'll likely dance around the truth and the media will let him off the hook as usual. But they shouldn't. Pence has been in the middle of all this Russia business at least since the transition, which he headed.

And he was in the middle of Comey's firing as well. According to the New York Times, Pence was among the small group of staff members with whom Trump had mulled the decision after he became angry over Comey's testimony before the Senate Judiciary Committee last week. So Pence knew very well that Trump had decided to fire Comey for his own reasons when he went before the cameras and said that the president had merely "accepted the recommendation" of the Deputy Attorney general.

For reasons that have more to do with style than substance, Pence is often given the benefit of the doubt in these situations, as if he's the patsy and has no idea his boss is a notorious liar. His furrowed brow and treacly Midwestern sanctimony seems to cover for the fact that he's extremely close to Trump and is usually in the room when these lies are hatched.

Going back to the campaign, recall that Pence lied dramatically in the debate with Democratic vice presidential candidate Sen. Tim Kaine of Virginia, even claiming that he had never contrasted President Vladimir Putin favorably with President Barack Obama, despite videotape of him saying it. More important, Pence ran the transition after Trump fired Gov. Chris Christie. And it was during that period that General Michael Flynn was making his inappropriate phone calls to the Russian ambassador, writing op-eds on behalf of the foreign government that was paying him when he wasn't dodging complaints about his son's white supremacist activities.

Mike Pence was the man in charge when all that was going on and despite his Sgt. Schultz routine it turned out he had been thoroughly aware at the time about Flynn's questionable activities, such as his work for the Turkish government. He apparently didn't think it was something worth worrying about.

It has never been fully explained why Trump failed to mention to Pence that he was going on TV and misleading the public about Flynn's contacts with the Russian ambassador after Acting Attorney General Sally Yates sounded the alarm. Supposedly Pence only found out by reading it in the paper — which makes you wonder why he wasn't as angry at the boss as he was at Flynn.

The fact is that the vice president is not a victim in all this. He's a loyal member of the Trump team involved in all the top decisions, and it's important that people remember that. If Trump were to vacate the job for one reason or another (there are so many possibilities) Pence would inherit the presidency. One hopes that nobody will mistake him for an innocent in all this and give him a mandate to govern. He's with Trump every step of the way.