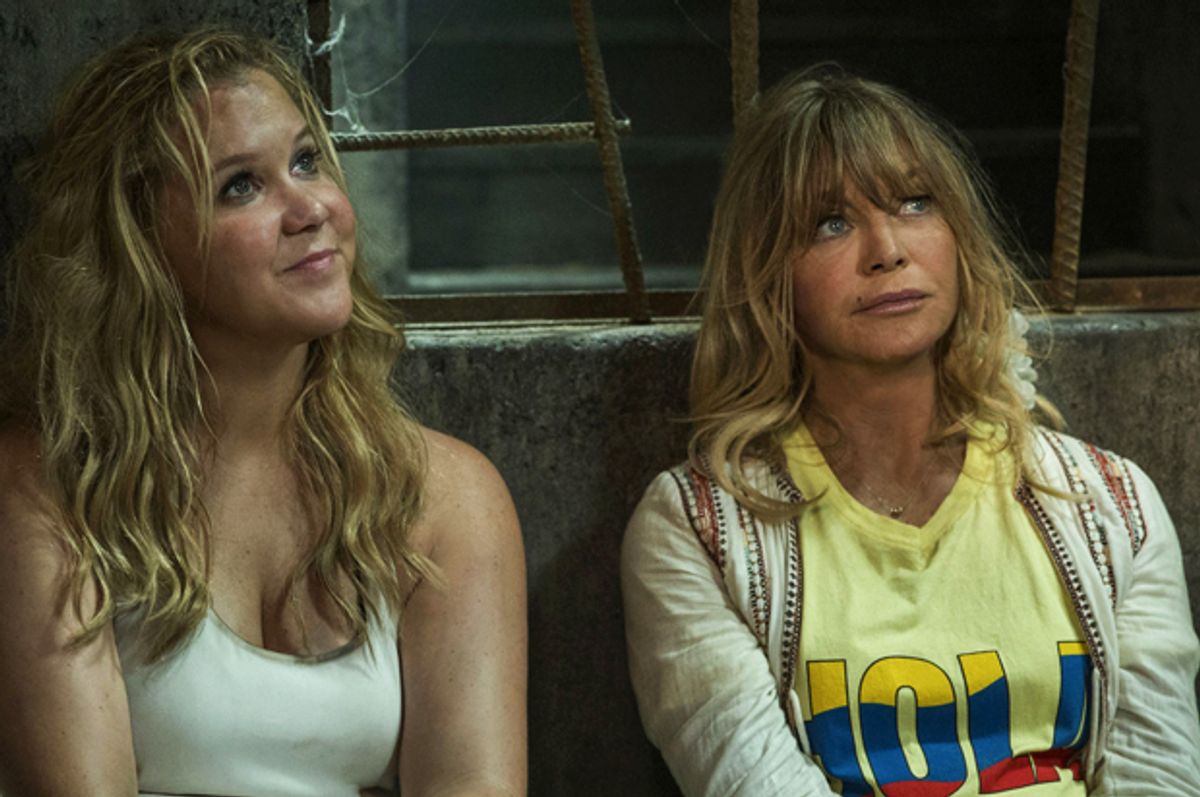 In “Snatched,” Amy Schumer is Emily Middleton, a privileged blonde who likes to get drunk and post pictures of herself to social media. The film’s writer, Katie Dippold, might as well have called her Amy, as Schumer did when she wrote her own role in “Trainwreck.” This is the same character under different circumstances.

Or more precisely, this is the same character in an earlier stage of development. Whereas Amy was an ignorant, narcissistic and superficial magazine writer with a fear of commitment, Emily Middleton is a doubly ignorant, narcissistic and superficial soon-to-be-fired retail clerk for whom commitment isn’t even on the table. In an early scene, her musician boyfriend (played by Randall Park) breaks up with her. “You don’t have any direction in life,” he tells her.

As if a broken heart weren’t enough, the breakup leaves Emily without a companion for a nonrefundable trip to Ecuador — the horror! You would think Park’s character would pay for his share of the trip and that would be that, but men are scoundrels and dunces in “Snatched” — and such a simple solution would make for a short and uneventful movie.

Instead, the film follows Emily to her single mother’s enormous suburban home, where she goes to sulk and be consoled. Emily’s mother Linda (Goldie Hawn) is a shut-in who keeps the company of cats and her mollycoddled, Klingon-speaking grown son (Ike Barinholtz). When Linda creates an online dating profile she thinks about writing “I love adventure” before erasing it and writing “I love Grey’s Anatomy.” She can’t even bring herself to project a bold façade on the internet.

But Linda wasn’t always that way. When rummaging through a closet, Emily stumbles upon a photo album full of pictures of her mother as a dynamic young woman. A lightbulb goes off: she’ll bring her mother to Ecuador. Thus begins the buddy comedy.

Like many a great buddy comedy, the premise behind the narrative and the humor in “Snatched” is that Emily and her mother are an odd couple. Emily is brazen, her mother humdrum. And Emily, in her recklessness, drags her mother on an adventure in which they both must confront their deficiencies.

The escapade begins when Emily meets a handsome British stranger named James (Tom Bateman) at the resort’s bar. Despite multiple warnings to be cautious in this foreign country — Wanda Sykes, as an overly friendly fellow resort-goer named Ruth, tells her that one in four tourists are kidnapped in Ecuador — Emily blindly follows James off the resort to a party where they dance and she gets so drunk that she doesn’t realize when she suffers a considerable wardrobe malfunction. When Emily returns to her room in the wee hours of the morning, her mother scolds her. A drunken Emily says, “You’re too young to be acting like this.” And Linda responds, “You’re too old to be acting like this.”

The next day, they both take a day trip with James — only to be, you guessed it, snatched. From here, the film hits all the beats of a buddy comedy; the problem is that one half of the band isn’t given any solos. Every buddy comedy needs a straight man (or woman), and that’s Goldie Hawn’s role here. But even by straight man standards, Hawn is given little to do in “Snatched.” Linda is meant to be a drag, but drags don’t have to be, well, such a drag. It’s curious that Hawn, whose last film role came in 2002, would return to the big screen to lather excessive amounts of suntan lotion on Amy Schumer’s chest and then get out of the way while Schumer dances on the sun.

Yes, “Snatched” is the Amy Schumer show through and through — not to be confused with the often brilliant “Inside Amy Schumer.” In “Snatched,” Schumer is indulged all of her worst tendencies. The bulk of the jokes center around her being a vapid white girl. The film is self-aware about her cultural ignorance, but the fruit it picks is too low-hanging. When Emily is kidnapped, she’s more distressed that her phone is taken away than she is that she is put in a jail cell with bloodstains and a scorpion.

As with “Trainwreck,” there’s a worthwhile critique to be made about the way this film depicts race. The villains are nefarious, easily outfoxed brown men who prey on white women. And though it could be argued that everyone — white, black and brown — is a bumbling fool in “Snatched,” it’s troubling that the “bad” cartoon characters are the brown, foreign ones. Now is certainly not the time to propagate the myth that the “other” is dangerous, and that Americans shouldn’t venture off the resort.

There are a few strong bits in “Snatched” — the best of them centering around Joan Cusak as a silent ex-special ops agent — and the film is well-paced. But as Hawn’s Linda should have learned, this time around Amy Schumer isn’t worth leaving the house for.