Can low-wage industries survive without immigrants and refugees?

Case Farms’ history shows how many sectors like meatpacking depend on immigrants and refugees. 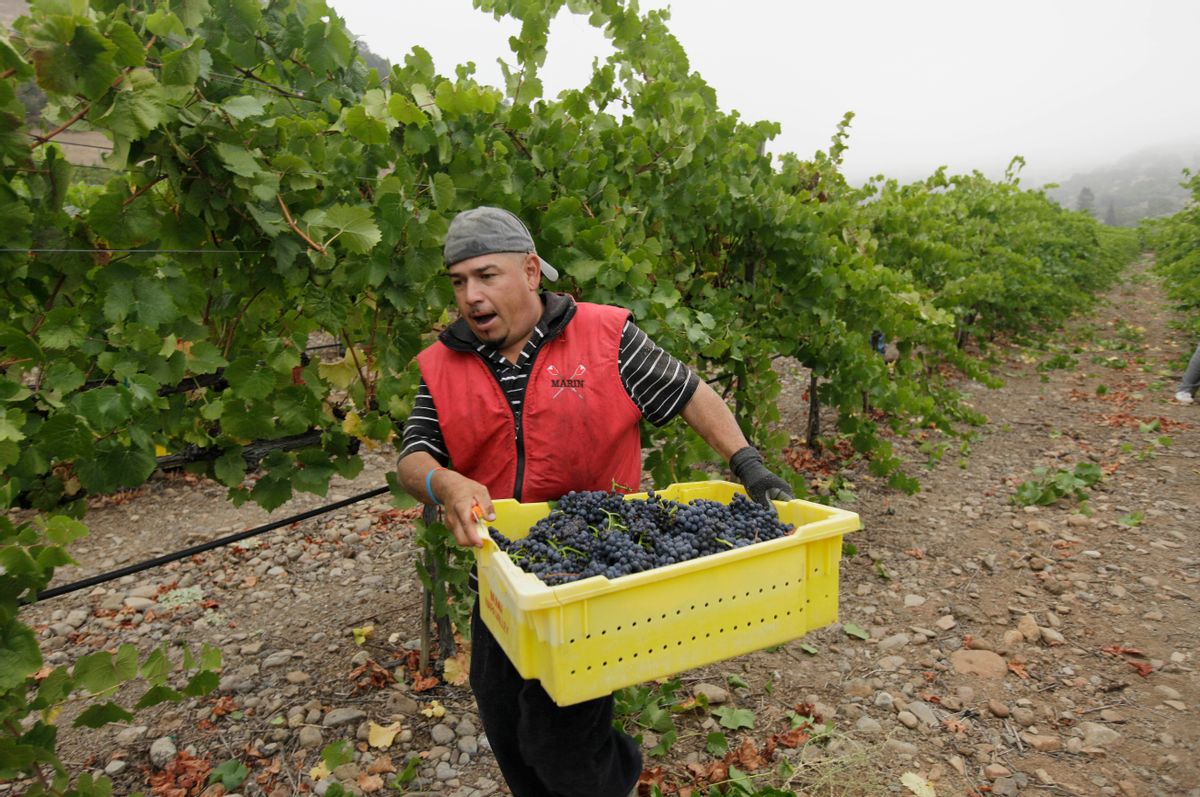 One afternoon this fall, I knocked on the door of a redbrick apartment building in Akron, Ohio, looking for a Bhutanese refugee who’d lost the tips of his fingers at a Case Farms chicken plant in a vacuum-pressure machine known as a “fat sucker.”

In the apartment’s tiny living room, a young man told his story in halting English. As he spoke, I realized that his name was different from the one I had, and, instead of losing his fingertips in a fat sucker at the company’s Canton plant, he’d lost his pinkie to a saw at its plant in nearby Winesburg. I had the wrong guy, but I’d stumbled on yet another Bhutanese refugee who’d sacrificed part of his body for the company.

The Bhutanese ended up at Case Farms in 2011 by way of a refugee resettlement agency. It was a marriage of the desperate. The refugees needed work that didn’t require speaking English or an American education. Case Farms needed workers who would accept the low pay and grueling, cold and monotonous conditions that U.S. safety inspectors have repeatedly deemed extremely dangerous.

The Bhutanese were only the latest crop of foreign labor to stand on Case Farms’ chicken lines, slicing breasts and wings for fast-food restaurants and grocery stores across the country. For decades, the company had largely relied on Mayan immigrants fleeing violence in Guatemala, many of whom were not allowed to work in the United States. Case Farms’ history with the Mayans reveals how U.S. companies subvert immigration laws to take advantage of undocumented immigrants, but it also illustrates a broader — and perhaps underappreciated — truth about the American economy: So much of it depends on a never-ending global scramble for low-skilled labor.

President Donald Trump rode into office vowing to restrict the flow of refugees and unauthorized immigrants. The rhetoric played well among Rust Belt voters who had seen their industries decline just as Latino immigrants began arriving to take jobs they didn’t want, seemingly transforming the towns they used to know. But Trump’s efforts to make good on those promises could substantially disrupt the companies that provide America’s food, build its homes, and supply workers to clean hotels and office buildings and unload shipping containers for retail stores.

Just as technology firms and hospitals have come to rely on high-skilled immigrants secured through visa programs, low-wage industries depend heavily on migrants from the world’s hotspots, secured through refugee programs as well as other means. That reliance has prompted some of the nation’s meatpackers to fear that under Trump the global marketplace may shut down, resulting in labor shortages that, they say, will drive up prices and reduce food supplies. “A legal immigration system that works is the best way to address illegal immigration,” Cargill chief executive David MacLennan wrote recently. “We must not close our minds or our borders.”

Poultry and meatpacking companies have long drawn labor from the bottom rung of society. Jurgis Rudkus, the hero of Upton Sinclair’s “The Jungle” was a new Lithuanian immigrant. As processing plants moved out of union-heavy cities closer to farms, they relied on poor, rural whites and, after the country desegregated, African Americans. By 2006, 46 percent of meat and poultry processing workers were Hispanic. In recent years, slaughterhouses have turned to refugees, from Bosnians in Iowa to Somalis in Kansas. Tyson Foods is based in Springdale, Arkansas, which has become home to thousands from the Marshall Islands who hold special status because of nuclear weapons testing during the Cold War.

Case Farms managers told ProPublica they are careful to follow immigration law and say they treat workers properly, wherever they are from.

When Case Farms started in Winesburg in 1986, it mostly employed young Amish women, but they left as the company expanded and hired workers from Rust Belt cities nearby. Its second plant in Morganton, North Carolina, also had trouble staffing its lines. At the time, manufacturing was thriving in the Southeast and the white and African-American workers the company had employed — even the Hmong refugees who settled there after the Vietnam War — left for better-paying jobs at local furniture factories.

So Case Farms joined others in the industry in a search for Latino workers, recruiting along the Texas border and in farm labor towns in Florida. The number of Latinos working in the poultry and meatpacking industry grew exponentially in the 1990s. The North American Free Trade Agreement played a role by eliminating steep agricultural tariffs, which caused chicken exports to Mexico to more than sextuple and, according to some critics, devastated Mexican farmers, leading many to seek work across the border.

Case Farms eventually found the Mayans, who began settling in Morganton in the early 1990s, and a few years later started arriving around Winesburg. Case Farms recruited many of them directly from Florida, but a Guatemalan pastor I met in Ohio said the company gave him a 15-passenger van to transport immigrants from its plant in Morganton to work at its plant in Ohio. The recruitment and migrant stream that followed turned Rust Belt cities in the Appalachian foothills into immigrant gateways that now claim some of the largest populations of Awakateko and Ixil speakers in the United States.

As the Mayan workers gained strength, eventually unionizing and going on strike, the company recruited a series of immigrant groups — Cubans, Romanians, Chinese, North Africans and Burmese — seemingly pitting immigrant communities against each other.

In one instance, some employees told the National Labor Relations Board that the human resources manager promised Case Farms would give everyone a raise if they could help him get the newcomers to sign papers decertifying the union, which was led by Guatemalans. The Burmese initially refused through a translator, one employee said. So the employee and a colleague waited until the translator left and explained the deal to a new worker who spoke a little English. “She asked me, ‘Oh, more money?’ ” the woman told the NLRB. “And I said, ‘Yes, more money.’ Afterward, she said something in her language to the rest and everyone signed the little pieces of paper to get rid of the union.”

The Burmese didn’t last long, and for a while, it seemed the Bhutanese might not either.

The Bhutanese began arriving in Akron in 2008, settling in a neighborhood that had been home to Italian and Polish immigrants before them. They had been living in U.N. camps in Nepal since the early 1990s, when the small kingdom of Bhutan in the Himalayas began expelling tens of thousands of ethnic Nepalis, viewing them as a threat.

Manorath Khanal works at Case Farms in human resources and has recruited scores of Bhutanese to work there. I met him at his apartment in Cuyahoga Falls. It was the end of the Hindu holiday Diwali and he wore garlands of orange and purple flowers. Khanal, 42, recalled that when he was a teenager in Bhutan, soldiers entered his village and began arresting people, who were never seen again. One night at midnight, his family fled, crossing the swollen rivers near the border in India, and got into the back of a big truck that took them to Nepal.

He became a leader in the refugee camp and helped negotiate resettlement in the United States. Eventually, Khanal was flown to Phoenix, where he worked cleaning airplanes, before moving in 2012 to Ohio, where Case Farms hired him as a trainer in Winesburg. There weren’t many Bhutanese in the plant at the time, and retention was bad. Khanal told me he was brought in to help the company communicate with the Bhutanese workers and address concerns. “We don’t have enough good supervisors on the production floor,” Khanal said. “They hardly understand what is the meaning of being human, what is humanity, what is respect, what is motivation.”

As the labor market and the flow of immigrants have tightened, Case Farms appears to be making an effort to hold on to the ones it has. The company now gives workers a day off for Diwali. It helps underwrite the Bhutanese association’s office in Akron as well as an annual cultural celebration and soccer tournament. At the national convention of Bhutanese organizations in 2013, two of the three speakers on the entrepreneurship panel were from Case Farms. Conditions are improving, Khanal said, but workers tell him they’re treated differently when he’s not there.

A Bhutanese human resources assistant named Upendra Luitel said some things the company does make him uncomfortable. “Most of the employees, they are having some kind of hurt in their hands,” he said. Yet workers have to pay to replace wet gloves, he said, even though the moisture makes their hands cold, increasing the pain. Last year, Luitel said, the company started giving disciplinary points to workers who called in sick — even if they had a doctor’s note.

Case Farms said they instituted the rule because workers had abused a more lenient policy regarding absences.

Back at the apartment, Gambhir Rai, the man who lost his finger, showed me how the saw blade severed his left pinkie at the knuckle and skidded over his ring and middle fingers. “At the time, I’m new in everything, I’m new in America,” he said, explaining that he didn’t know what to do after the 2014 accident. Rai, 35, said he received about $4,000 in workers’ compensation for his finger in addition to weekly checks while he was out of work.

He returned to the plant but quit in February, tired of the long commute and what he felt was ill treatment. Rai said many Bhutanese are happy to have the work at Case Farms when they first arrive, figuring they’ll work there for a short time while getting settled. “Anywhere we work, we love to do our job, we work hard,” he said. “Everybody worries about the job and the future.”

Rai now works at an auto parts warehouse in Akron, which has begun hiring in the Bhutanese community. It’s much different than Case Farms, he said, raising the question — as many worker advocates do — whether the low-wage labor shortage stems from a lack of refugees or simply a lack of respect. “They don’t say, ‘You’re not working this way. You’re not doing good,’” he said. “I get the response, ‘You’re a good worker. You’re a hard worker. You’ve done a lot.’ At Case Farms, I never get like that.”