Who in the hell is Rod Rosenstein? Everything you were afraid to ask about this suddenly important person

Got whiplash from the news cycle? Find yourself asking "who?" Here's dirt on the guy blamed for pushing Comey out 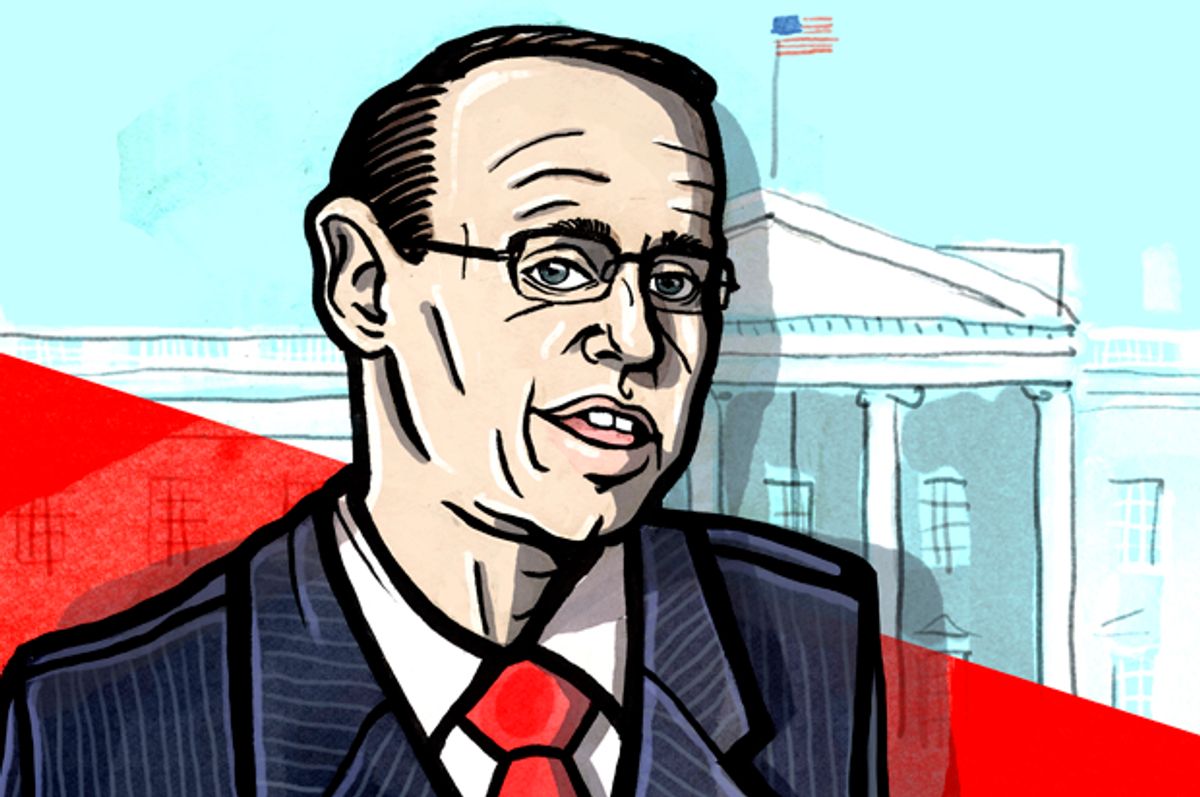 Rosenstein was confirmed by the Senate on April 26 by a vote of 94-6. April 26, coincidentally, was the inaugural “Take Your Fake Bipartisan Support to Work Day” on Capitol Hill.

MY MARYLAND: Before venturing swampward, Rosenstein was the longest-serving U.S. Attorney in history. As U.S. Attorney for the District of Maryland, he served under both Republican and Democratic presidents, which seems kind of adorable right now. During his tenure, he oversaw marked decreases statewide in violent crime and was responsible for the conviction of numerous corrupt Maryland policemen who didn’t ride in the back of a transport van in Baltimore. In a 2007 Q&A with the Baltimore Business Journal, he explained his job as lead prosecutor to his daughters by telling them, “I help catch bad guys.” To which his youngest daughter replied, “You’re Spiderman? Holy shit!”

MEMORANDUMB: Rosenstein came to national, uh, prominence, yeah, prominence, earlier this week when he was credited with authoring a three-page memo to his boss Jeff Sessions which gave grounds for President Trump to dismiss FBI chief James Comey. In the memo to Sessions, Rosenstein wrote, “I cannot defend the director’s handling of the investigation of Secretary Clinton’s emails. Almost everyone agrees the director made serious mistakes; it is one of the few issues that unites people of diverse perspectives…. No puppet. No puppet. You’re the puppet!”

When the memo was finally released, it contained two and a half pages of grievances against Comey, and a half-page list of rates for Sean Spicer to hide in and trim your bushes.

HMMMMMM: The day before he was fired as FBI Director, Comey asked Rosenstein for more funding for the department’s ongoing investigation of ties between Russia and the Trump campaign. Rosenstein was overheard saying, “Why is it always about money with you gentiles?”

AND THE DAY AFTER: Rosenstein, now a key adviser to Trump by virtue of being the last person to speak with him, said it was okay to have President Nixon’s Secretary of State, Henry Kissinger, in for an Oval Office photo op, as long Gordon Liddy didn’t stop by to shoot out the lights.

AND THE DAY AFTER THAT: Rosenstein contemplated resigning as deputy attorney general after he felt the administration had pinned the Comey firing on him. At one point, he tried to email the White House to correct any misleading statements, but unfortunately could not find a Wi-Fi hotspot under the bus. Eventually, Rosenstein decided against stepping down. In the end, he took a long hard look in the mirror and realized the only way he could make this kind of sweet coin was as a Les Nessman look-a-like in a touring "WKRP in Cincinnati" tribute musical.

PRESIDENT TRUMP ON ROSENSTEIN: “Check… Check one… Check… Check one…. Good guy. He’s a good guy. Smart guy. We’ll see how smart. You know you can be too smart, don’t you? Of course you don’t, because you’re not smart. He’s a Wharton guy. I went to Wharton, but that’s not important. What’s more important is that a lot of people are saying I went to Wharton. You know who else went to Wharton? Ivanka. Ivanka. She has done a terrific job empowering the women. You have to empower the women because it’s all about that. You have to do it. You have no choice. You have no choice legally. And that’s what she does. Empower the women. Not today, because it’s Saturday and she’s behind a screen in shul. But the second the men let her out, right back to empowering the women. Now, this guy, Rosenstein, gave me three pages. I only wanted one, but he gave me three. He’s a go-getter. That’s what he is. I’ll tell you what he isn’t. He isn’t a showboat. Not a showboat. You know, I had a chance to buy the Showboat in Atlantic City in 1988, but my dad threw out his back trying to bury $20 million in Trump Plaza chips at Randalls Island. You know what? That didn’t happen. I planted that. That was fake news by me. Were you paying attention? Of course not. That’s the problem. And that’s what this guy you asked me about, Rod? That’s what Rod will take care of.”

BREAKING: White House now reveals James Comey was fired because he did not impress the executives at El Pollo Loco with his brand messaging.

HOMELIFE: Rosenstein is married to Lisa Barsoomian, a lawyer, and is the father of two daughters, Richardson and Ruckelshaus.