A book reveals the double life of a famous modernist recliner 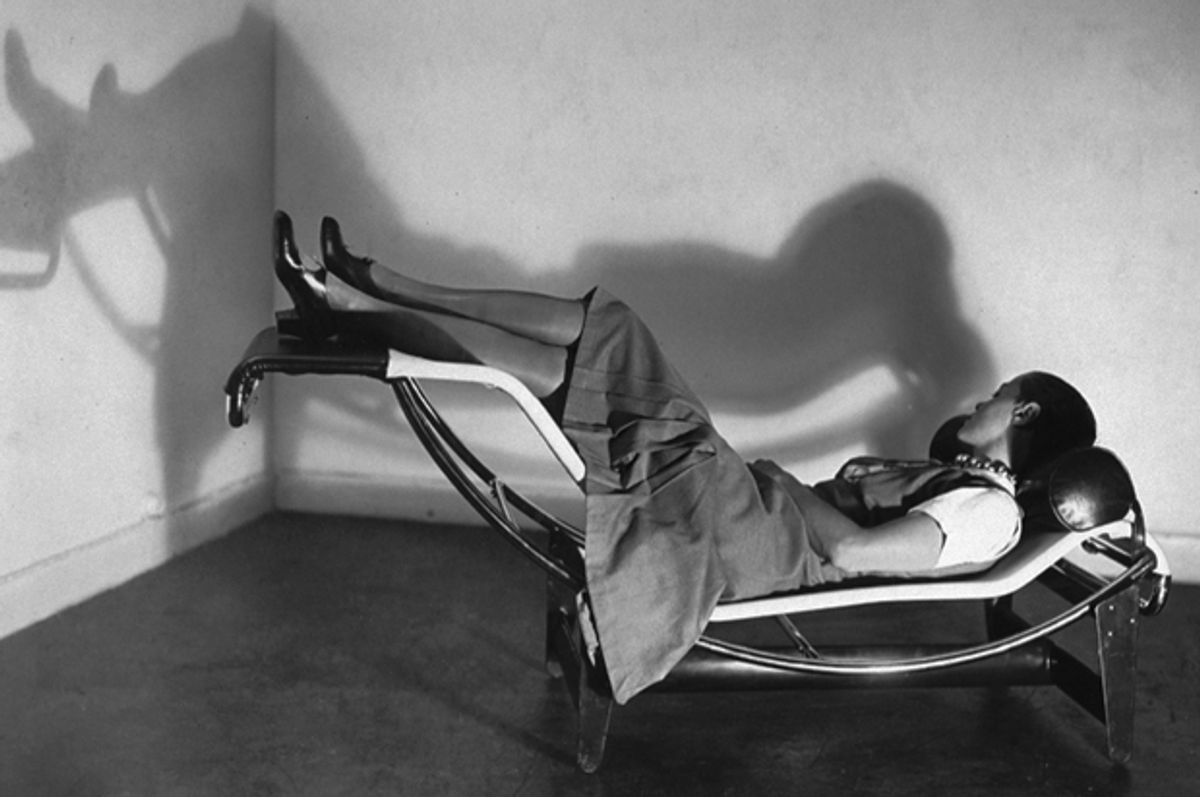 It’s an unlikely synergy between sex and setting that's become the subject of the brilliant little book "We Don’t Embroider Cushions Here" from Édition Monumental by Augustine and Josephine Rockebrune.

The sleek leather-and-chrome chaise longue’s prominence in adult films was spotted by the pseudonymous sibling artists Rockebrune when they were searching for photos of the author Tom Wolfe. After accidentally landing on his adult-film namesake in an X-rated scene set on an LC4, they realized the design, which is credited to Le Corbusier, Pierre Jeanneret and Charlotte Perriand, appeared in quite a number of adult films.

Soon they were scouring sites like PornHub.com and compiling cameos of the LC4 (and convincing knock-offs). From there, they built models of popular shooting locations to help them quickly identify films where the chair might appear, hiring a virtual workforce in Chandigarh, India, to help comb through the 800 films they identified.

With 150 screenshots in hand — including images of Sasha Grey licking the chaise longue’s leather skin, a diptych of climaxing women in matching pearl necklaces and more — they distilled their unexpected obsession into a 212-page art book chronicling the sexual politics of the iconic recliner. The book’s title, "We Don’t Embroider Cushions Here," isn’t just a cheeky reference to what takes place on its pages. It’s also an echo of the way Corbusier first dismissed designer Charlotte Perriand when she approached his studio in 1927. As Perriand’s memoir tells it, the bespectacled architect assumed Perriand was not a serious talent, though he soon changed his mind after seeing her work at an exhibition. Though their collaboration would produce such modern masterworks as the LC4 and its chrome-caged cousin, the LC2 Grand Confort club chair, Perriand nevertheless struggled for the credit she was due.

It’s not much of a stretch to extend Le Corbusier's initial, misogynistic brush-off —”we don’t embroider cushions here” — to the women who appear in the book, be they tied to the chair, crawling to it in stilettos or resting upon it as if an offering on an altar. You wouldn't be out of bounds applying it to the anonymous workers who compiled the images inside "We Don't Embroider Cushions Here" in India as well.

From the way that Cassina describes the LC4, it’s easy to imagine why the chair is a popular in pornography: “Built in a shape designed for relaxation, the chair was created when the three designers teamed together to put man at the centre of their design, taking the idea that form and function should be at the service of relaxation, creating a perfect balance between its geometric purity and its ergonomic intent." It continues, "The stability of the frame — for any angle of inclination — is guaranteed by the friction through rubber tubes that cover the cross bar of the base.”

The design is intentionally humanlike, a round cushion for the head topping a long, lean body. There’s the apparent potential for motion, but unlike the bentwood chairs that helped inspire the LC4, it’s surprisingly anchored. Similar to most collaborations between Corbusier, Perriand and Jeanneret, the LC4 was designed for an express purpose: relaxation. As such, it’s expensive (some may find its nearly $4,000 price tag at Design Within Reach more obscene than any of the images in the book) without being as functional as, say, a dining or office chair. Its limitations are a type of luxury in their own right, making the chair a status symbol that appears as a knowing wink on the pages of modernist design magazines. With those credentials, it’s easy to see how it might end up, even unintentionally, in the adult film industry. Pornography often lives in a fantasy world of anonymous modern mansions in the outskirts of Los Angeles. The interior styling is often clinical, providing a hygienic (no embroidery here!) and impersonal backdrop that hints at worldly luxury and taste (or at least the means necessary to buy into it), but without a lived-in feeling.

In telling this unintended side story in the history of an iconic design, the Rockebrunes hint at capitalism's darker avenues, the territories where the desires of the consumer trump the wants and humanity of those who produce that which is desired. We see men and women performing the supposed act of pleasure in pleasurable settings, but it is really only the viewer at home on the other side of the screen that gets their rocks off.

For her part, Perriand appears in the book's very first image. There, the designer lounges on her creation, legs propped up above her head, face turned away from the camera — her work speaking for itself.