Little landmines: What to watch (out for) on Mother's Day when you're grieving

A month after losing my mother grief hits me when I least expect it, mostly while watching films and TV shows 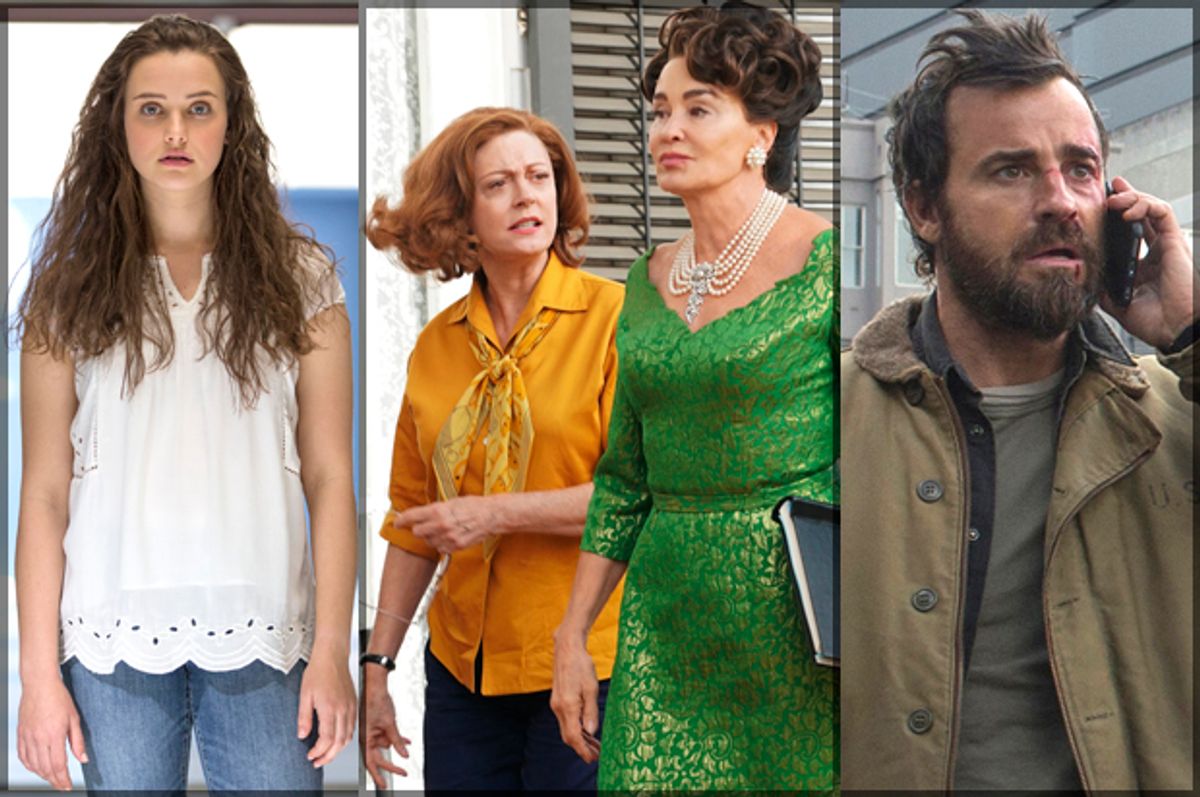 On a recent four-hour flight to Chicago I decided to pass the time by watching a movie. Among the selections was an animated film a friend of mine enthusiastically recommended. “Out of everyone I know,” she said, “you’d relate to it the most.” This was the sole detail she offered about it. No spoilers, right?

So I selected that movie, plugged in a pair of earbuds, wrapped myself in a blanket and settled in for what I thought would be 90 minutes of light entertainment.

Within 10 minutes I was shuddering under my travel throw as I labored to sob as inconspicuously as possible. Luckily I occupied the window seat, and the person in the middle one gingerly slid several cocktail napkins onto my tray table but otherwise acted as if nothing was amiss.

The purpose of that trip was to stay with my mother in an intensive care unit, where she had been sent after suddenly falling ill. My mother lived with dementia for nearly a decade, and that meant someone had to sit with her at all times to make sure she didn’t pull out her tubes or remove her breathing mask. Every few minutes whoever sat with her reminded her of where she was, and reassured her that she wasn’t alone. She would never make it out of that I.C.U.

The film I selected on my way to that mission was “Kubo and the Two Strings.”

Nothing in the plot synopsis for “Kubo” hints that family tragedy or memory loss are central to the plot, or warns of anything else that might touch off a 90-minute weeping fit. I deeply resented being taken by surprise. Let me be clear, I don’t blame my friend; I blame the damn movie. I selected a cartoon and ended up tumbling into a pit of spears, where I sat trembling in shock for nearly two hours.

It was the first of many cinematic little landmines I’d encounter in the weeks leading up to Mother’s Day.

As far as holidays go, Mother’s Day doesn’t lay a months-long siege to daily living in the same way that Christmas or Valentine’s Day does. Any very special episodes that exist specifically in its honor are few and far between, and for the most part, those of us who might be triggered by the holiday know which films to avoid.

Online shopping also makes it possible to limit direct exposure to rosy sentimental displays in drugstores or to avoid looking at certain aisles while shopping for groceries. The messaging is everywhere, but knowing where it's likely to lurk is helpful.

I've even learned to weather the unexpected gut punches, such as those retailer e-mails appearing in my inbox every morning. Moments before writing these words, I peeked at my inbox and was greeted by "Call Your Mom" from a photography service, for crying out loud.

Then there was this gem, a subject line from an online florist: “Being a Mom is hard, thanking yours is easy!”

I wanted to reply to that one with, “My mother died at the beginning of April so no, it isn’t easy. On the contrary, one of the first stages of grieving is questioning the ‘enoughs’ of your relationship with the parent you just lost. ‘I didn’t call her enough' -- that's a fun one. Or, 'Did I send her enough of your goddamn bouquets that are less resplendent in real life than they look in the photos on your site?’”

Instead I hit delete, take a few deep breaths, and move on.

Those micro-explosions last for moments. When a series’ or a film’s plot ambushes me, though, that flattens me for days. And in the same way those casually devastating e-mail offers and frilly store displays state their intentions up front, the movies or TV series that announce their tragedies aren’t the wrecking balls. Deadlier ones hide their psychological attackers in the bushes down what would appear to be very clear and safe roads. They wait ahead, silent and patient, invisible ninjas ready to stab.

A week before my mother’s funeral, I subjected myself to the entire season of “13 Reasons Why.” For work, understand. Netflix did not hide that it is about a dead girl, so that part of the tale didn’t bother me. No, the gotcha that woke me up in the middle of the night was its theme of bottomless regret.

Two days after we buried my mother, I returned to the real world and to my job to review  HBO's “The Leftovers” -- terrific idea, I know -- as well as Lifetime's “Mary Kills People,” a show about a doctor who administers euthanasia to the terminally ill.

“Mary” wasn’t a problem. “The Leftovers,” as it turned out, I could work with.

The season finale of “Feud” was what shattered me.

Specifically it was the scene in which Jessica Lange’s Joan Crawford enjoyed a radiant, laughter-spangled conversation with old frenemies that was entirely hallucinated. I witnessed my mother having many such exchanges with empty spaces in her hospital room days before that scene aired, and that moment granted me temporary access to what I imagined her side of reality’s veil would look like -- and just as quickly and coldly, it yanked it away. The episode’s writer Gina Welch and director Gwyneth Horder-Payton deserve the highest praise for landing that scene with haunting precision.

Marvelous job, you two. Also, screw you. Both of you.

Among my peers, the first friend who lost her mother was my college roommate Heidi Kettenring. Heidi’s mom, affectionately known as Kacky, shared a birthday with me. During the year we shared a dorm room she sent me a card and birthday gift, and would often leave messages on our answering machine inquiring about my well-being. Kacky succumbed to cancer in 1998, a couple of years after Heidi and I graduated from college. This is Heidi’s 18th Mother’s Day without her mom.

When I asked Heidi if she’d ever been waylaid by a film, she immediately replied, “Have you heard of ‘Stepmom’?”  The 1998 film stars Susan Sarandon, Ed Harris and Julia Roberts, and ostensibly it's about a woman striving to make peace with her ex-husband’s younger girlfriend when he announces his intent to remarry.

Heidi recalled that it was promoted as a romantic comedy centered upon two bickering women, a brainless diversion for a person hollowed out by a major, recent loss. Heidi and her then-boyfriend, now-husband Dave saw it in the theater around six months after her mother died.

“Within 30 minutes,” she remembered, “You find out that Susan Sarandon is dying of cancer.”

Near the end of the film, Sarandon’s character brings her children into her room to give them elaborate homemade remembrances, which is exactly what Kacky did with Heidi before she passed away. "My mom said, ‘I’m dying. Her are my journals. Take them.'"

"That movie made me so mad! But it also paralyzed me. I didn’t have the wherewithal to get up and leave,” she added. “[The filmmakers] knew better. They wanted to get people in the seats . . . So many of us have a ‘you’re manipulating me’ attitude toward Hollywood, but that time I was like, ‘How dare you bury that lede.’”

Add that one to the list: No “Stepmom” for me, for a while. No encore viewing of “Feud,” and heck, it’s probably wise to avoid the episode of “Buffy the Vampire Slayer” titled “The Body,” in which the gang mourns the sudden death of Buffy’s mother Joyce. Forget “Up” for a while, too.

Another friend reminded me of the danger that lies in wait within “Sex and the City,” a series that should be the small-screen equivalent of spun sugar. That's probably true of every episode aside from “My Motherboard, My Self,” in which a major character's mother dies. However, I wish I'd received more specific details about "Wild."

Allow me to provide those who have recently lost mothers that kindness: "Wild" may not be an uplifting viewing choice this weekend.

But honestly, anything could set off my sorrow right about now. That’s the snarling peril lurking within the mourning process. Mother’s Day is a concrete known. Bracing for its impact is possible. What about after that? Will I lose it during “Guardians of the Galaxy Vol. 2”? (Probably!)

“It’s called a resurgence of grief; it bubbles right up to the surface very quickly, without warning,” explains Hope Edelman, author of the 1994 New York Times bestseller “Motherless Daughters.” I spoke to her on the phone last Thursday about these unexpected eruptions, especially the ones coaxed forth by the twinned impact of Mother’s Day and the stealth attacks that may await us in our entertainment choices.

Edelman also mentioned another term coined by clinical psychologist Therese Rando: a subsequent temporary upsurge of grief, or STUG. A STUG can happen at any time, whether instigated by a specific stimulus or seemingly nothing at all.

Edelman’s mother died in 1981, when she was 16 years old. Thirteen years afterward she published her book, and it spent 24 weeks on the New York Times bestseller list. Since then the book has become a go-to manual for weathering grief, inspiring gatherings for motherless daughters around the country.

The film that blindsided her, she recalled, was 1983’s “Terms of Endearment.” Citing the scene in which Debra Winger’s character summons her children to her hospital room to say goodbye to them, she said, “nobody knew that was coming. I remember my boyfriend had to carry me out.”

“Almost everyone can point to a scene in a film or a TV show that reactivated their grief,” Edelman offered. “But that’s not necessarily a negative thing, because it does allow us to keep processing it, to feel those feelings. It’s easier when you’re expecting something to come to sort of steel yourself against it. But if it comes and takes you by surprise sometimes, it’s not necessarily something negative.”

In Edelman’s experience, she added, many people remember those film or TV scenes with fondness. “They actually give us access to those emotions … and it’s really important to process them and work through them so that the next time something like that shows up, it’s not quite as painful.”

Following our conversation, Edelman solicited her Facebook followers to share the TV and film titles that break open their grief, and perhaps unsurprisingly, “Terms of Endearment” appears to be the tank buster of all movies about loss.

Other films that made the list include “Harold and Maude,” “The Descendants,” “Beaches,” “Steel Magnolias,” “Truly, Madly, Deeply,” “Crooklyn,” “One True Thing,” “American Beauty” and “What Dreams May Come.” Heidi recommends "The Babadook," and yes, that's a horror flick.

This list serves either as a trigger alert or a sampling of tools to access the sea of grief locked within. How I choose to regard it changes by the day, by the hour. Right now I may be binging these movies and episodes, one after the other in remembrance of the loving parent I’ve lost. Or I could be forgoing screens for the entire day, hiding under my covers.

One truth these upsurges reveal concerns the nature of grieving a parent with dementia or any long-term illness. My mourning period started nearly a decade ago, point of fact. My grief isn't new, but it is unfamiliar. As such, I didn’t cry much at my mother’s funeral, and I haven’t shed many tears in the weeks since. But the gaping hole in my body is real. I feel it on Mother’s Day and every minute after that.

Maybe I'll mark the occasion with a repeat viewing of “Kubo,” and weep in remembrance. Because that landmine has already been tripped. No spoilers.