Nikki Haley: "The president is the CEO of the country" so he can fire whoever he wants

"He doesn't talk with a bunch of people about it before, he just acts" 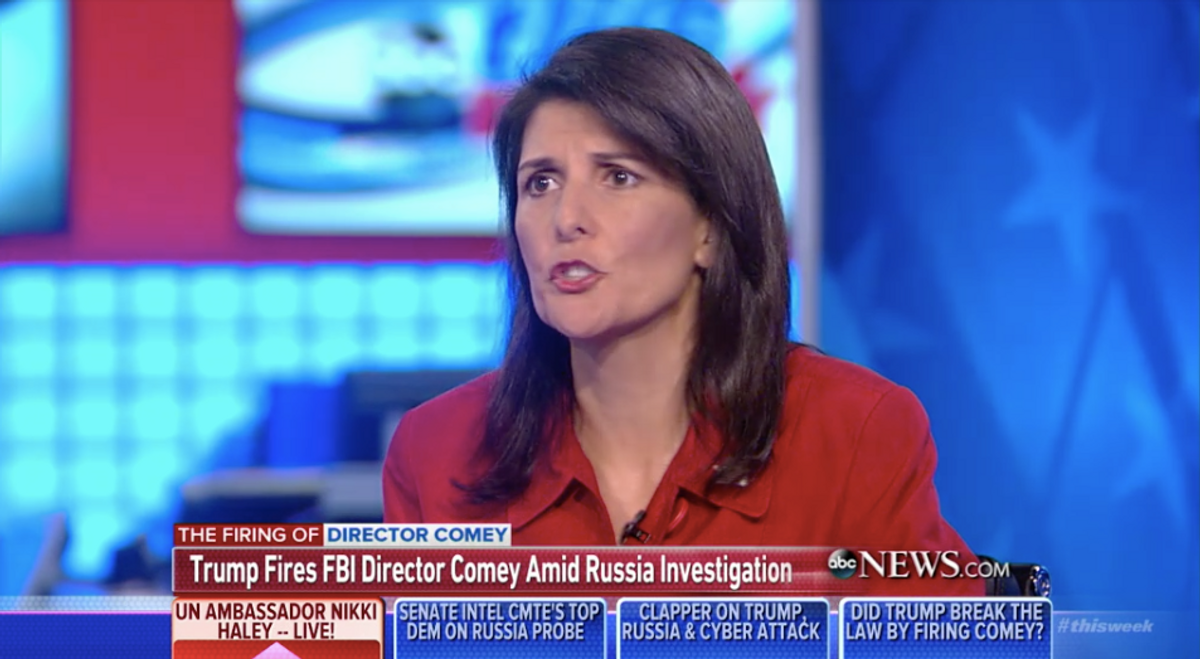 Nikki Haley, the U.S. Ambassador to the United Nations, defended President Trump on Sunday after his shocking announcement to fire the FBI Director James Comey, in an interview on ABC's "This Week" with George Stephanopoulos.

"The president is the CEO of the country," Haley said. "He can hire and fire anyone he wants," she added. As a diplomat Haley noted that it's typically unusual for her to talk about domestic issues, she defended Trump by saying that he had the right to fire Comey. "Whether you agree with it or not, it's the truth."

"What he's trying to do is find his own team, figure out how he's going to do it. Were there better ways he could have done that?" She asked. "That's for everybody else to decide."

Stephanopoulos admitted that Haley was correct, but said the questioning stemmed from the timing as well as "the reasons the president gave and also the whole question of credibility," he said, questioning if the president could be taken at his word. Haley responded saying that the reason she believes there have been widespread reactions was because the president is a man who acts.

"The reason people are uncomfortable is because he acts. He doesn't talk with a bunch of people about it before, he just acts," Haley said. She added there there is never "a good time to fire someone" but that the president needs to "surround himself with a team that he can trust."

Stephanopoulos then asked Haley if she believed that the Russian government was succeeding at its goal at attempting to disrupt the democracy of the U.S., something the intelligence community had said. Haley said, "I think that's what they're doing around the world. I think they're trying to do that."

On Friday the president threatened Comey over twitter about the possibility of "tapes" existing of their previous conversations.

It was also reported late last week that Trump had asked Comey for his loyalty during those conversations. Haley denied that Trump had ever requested such a thing but said she thinks "when you take the job, you automatically assume that you work for the president."

She added that "loyalty is a big thing. It's, you know, as a former governor, I can tell you, loyalty and trust is everything when you're a CEO. And so I can totally understand why he's looking for loyalty and trust."