WATCH: McCarthy's Spicer emerges from the bushes to share a kiss with Trump and save his job

"I'm pretty sure I can see him hiding in those bushes?" 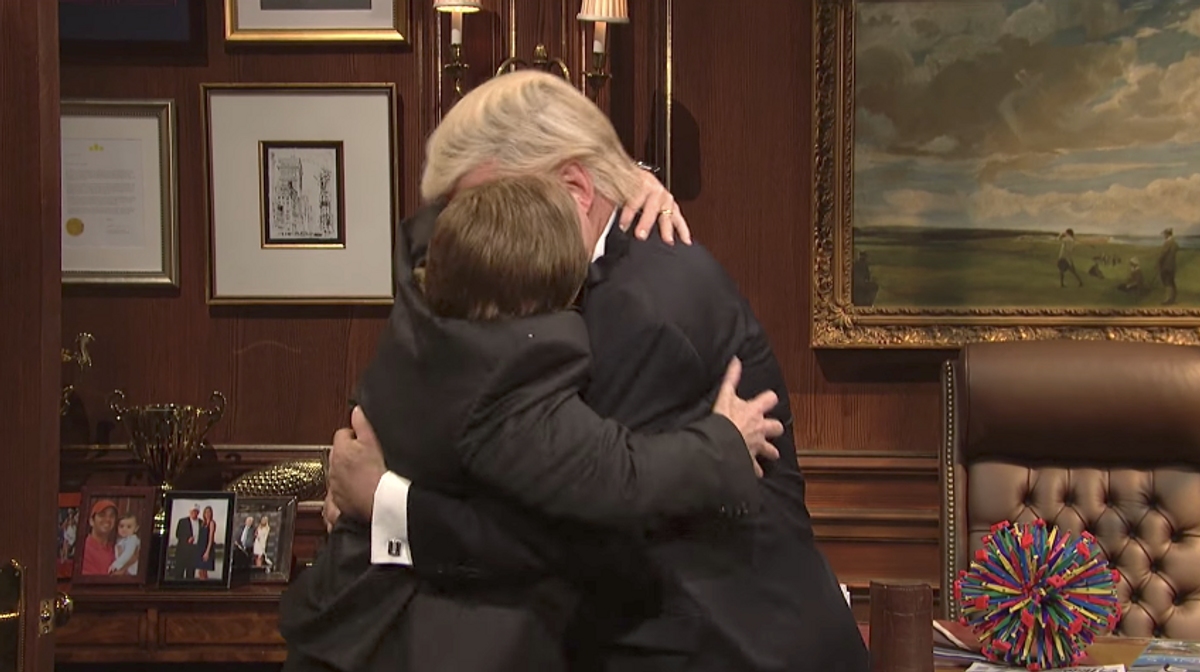 Melissa McCarthy returned to Saturday Night Live this week as White House Press Secretary Sean Spicer, and wreaked havoc on reporters during the press briefing. The sketch opened with Sarah Huckabee Sanders taking the podium, who was filling in for Spicer because he was fulfilling his Naval Reserve duty.

"I'm pretty sure I can see him hiding in those bushes?" one confused reporter said, as Spicer was peering through the windows into the press conference. Sanders denied this and said Spicer was just doing a naval exercise to blend in with his surroundings.

Reporters then asked if Sanders could be the press secretary every day instead of Spicer, because of his tantrums. Spicer then emerges during the conference, hoses down a reporter with a fire extinguisher, and pushes Sanders out of the way to take his podium back. "Liar, liar, pants on fire!" Spicer shouted. "That's why I put them out."

"Spicey's back, Sarah's out," He said. With the first question Spicer calls on Glenn Thrush of the New York Times, who asked if Spicer agreed that President Trump was unhinged because recent tweets.

"Oh my god," Spicer responds. "Glenn, do I come to your job and slap the seven or eight hot dogs out of your mouth?"

Spicer then told Thrush to shut up after he had asked a follow up question. "You stink, Glenn. You stink bad!"

"Alright let me put this whole Russian thing to bed once and for all. Trump is innocent. How do we know? Because he told us so, period." Spicer yelled.

Later in the briefing a reporter asked if Spicer was surprised that he was fired before Comey was. An enraged Spicer ripped a column out of the ground and threw it at the press. After being bothered by all of the questions surrounding his job security, Spicer left the conference on his motorized podium and head to New York to find Trump. Spicer eventually found the president in a residence he owns in New Jersey, and asked him if he's ever had him lie to the press for him. "Only since you started working here," Trump answered.

A distraught Spicer was not sure if he could do the job anymore, afraid of being replaced by Sanders. Trump assured he would never do that, and then embraces his press secretary for a lengthy kiss.