"What I'd love to do is stop them": Trump talks with Jeanine Pirro about ending daily press briefings

"Let's not ever do any more press briefings" 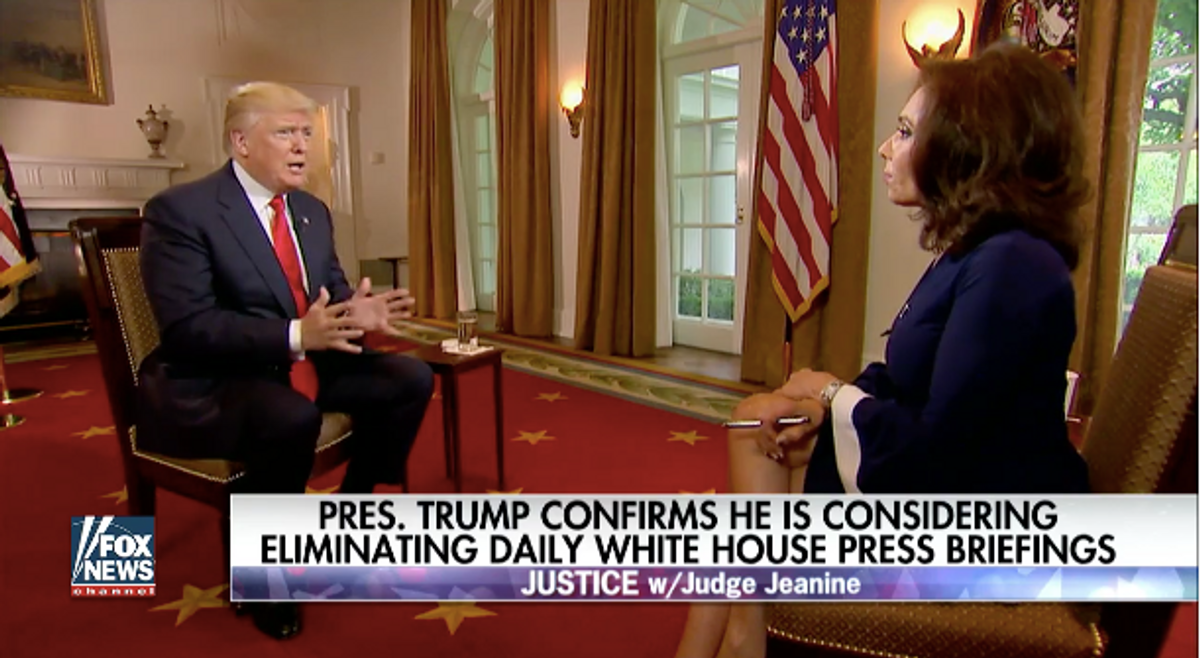 President Donald Trump wants to put an end to daily press briefings and instead issue written statements, he told Fox News' Judge Jeanina Pirro in an interview on Saturday night. The president also blamed the Democrats and the media for obstructing his agenda, said they were only focused on stories that make him look bad.

"Mr. President your agenda is not getting out, because people are caught up on the Comey issue, and ridiculous stuff," Pirro said. "How do we resolve that?"

Trump responded by suggesting that the solution is to get rid of formal press briefings entirely. "Let's not ever do any more press briefings," Trump said, though he also acknowledged that the ratings for them have been strong. The president added that the "fake media" is "going crazy." He also criticized the press for shouting questions during the briefings.

"You can't put an end to that," Pirro replied. When asked if he would seriously consider stopping the press briefings Trump replied "We do it through a piece of paper with a perfectly accurate, beautiful answer."

"What I'd love to do is stop them," Trump said of the briefings. However, he didn't give a straight answer on if we would actually end the decades long tradition. He added that the "hostility" from the press is "incredibly unfair." Pirro then brought up press secretary Sean Spicer, and if his job was secure or not. Trump continued to dodge the question, and didn't make any assurances and instead said Spicer "gets beat up" by the media on a daily basis. The president said he is so busy everyday and moves too quickly for his own communications office to keep up.

"Another President," Trump said comparing himself to other presidents without using names, "doesn't do what I'm doing." But he added that he wasn't trying to brag. Trump then suggested that other presidents would "sit in the oval office and practically do nothing all day." Adding that he's doing something "every minute of the day."

Trump said he would make his decision on cancelling daily press briefings "over the next couple weeks."