Why wait 30 years for robot CEO's?

Most CEO jobs are as outsourceable as everybody else’s. The incentive is greater too 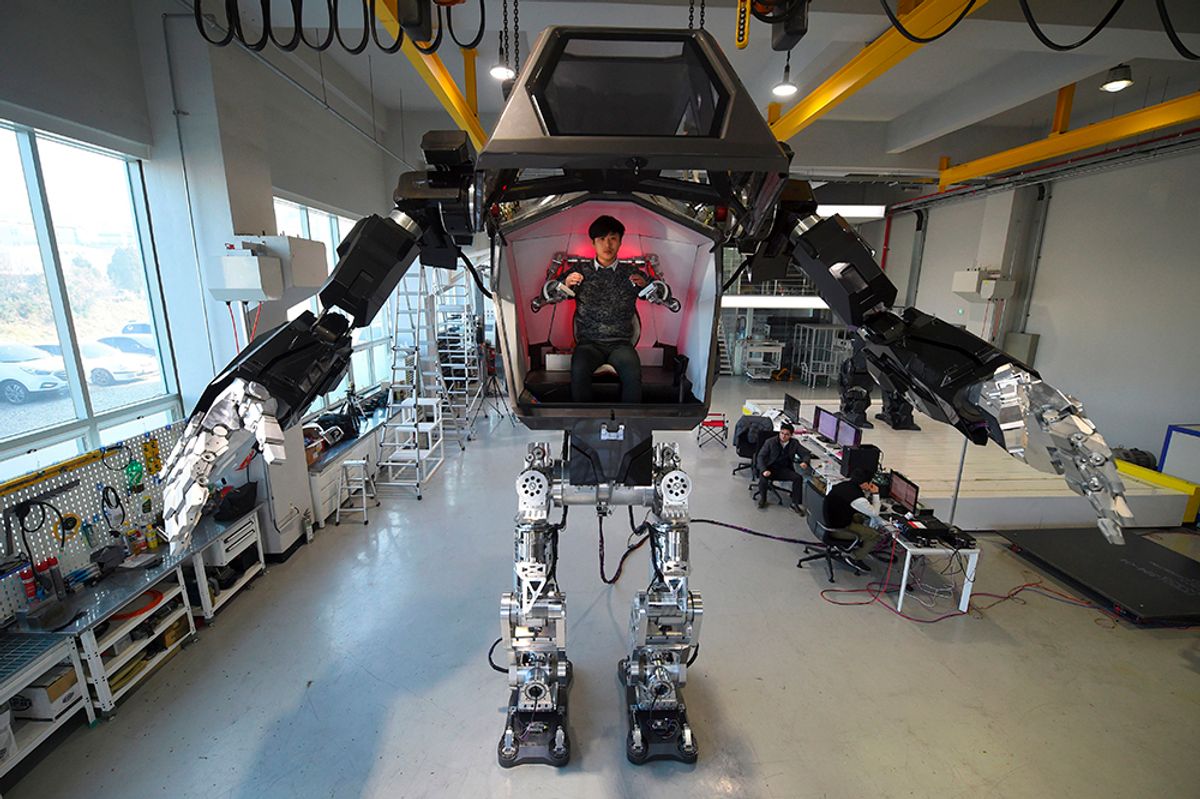 TOPSHOT - Engineers test a four-metre-tall humanoid manned robot dubbed Method-2 in a lab of the Hankook Mirae Technology in Gunpo, south of Seoul, on December 27, 2016. The giant human-like robot bears a striking resemblance to the military robots starring in the movie "Avatar" and is claimed as a world first by its creators from a South Korean robotic company. (Jung Yeon-Je/AFP/Getty Images))
--

Jack Ma, Chief Executive Officer of the Chinese Internet giant Alibaba, opined last week that in 30 years even CEO jobs would be outsourced to robots. My question is: What in the world would make us wait so long for that transition to occur?

Most CEOs are high-paid administrators

As far as I am aware, Ma’s outburst is the first that has seen robots as a threat to the jobs of the corporate elite. But of course, most of their jobs are as outsourceable as everybody else’s.

The incentive is greater too. The direct saving in salary costs, expenses and stock options costs from replacing a human CEO can easily run in the tens of millions of dollars.

True entrepreneurs have jobs that are not robotizable. They develop new products and expand their businesses into new areas through new and previously unimagined technologies.

They are also expert at getting a great deal of result from very few resources, as well at reacting nimbly to entirely new and unexpected shocks.

One cannot imagine machines/robots becoming good at these tasks in any reasonable space of time. It is likely that even in 50 years there will be areas of business decision-making that are entirely unamenable to robot penetration.

Most CEOs are not true entrepreneurs. They operate within relatively stable environments, in some cases highly competitive, in other cases much less so through sweetheart deals with their boards.

CEOs’ competitive situations do not change all that rapidly. For example, the threat from Internet shopping that is now hollowing out many bricks-and-mortar retailers has been developing for two decades, since the foundation of Amazon in 1994.

Most CEO generally have an extraordinarily well-paid job that is largely routine.

Human CEOs have amassed an especially dire track record in the last two decades. Whereas their compensation has soared far faster than overall U.S. output, productivity growth in U.S. businesses has notably lagged, indicating their failure to invest optimally.

Most of the frantic round of mergers and acquisitions that for many CEOs constitutes activity are either obvious or futile. Mergers to cut costs in an area of declining activity are the former, as are “bolt-on” mergers to increase a company’s penetration in an attractive market.

On the other hand, most mergers by which a company expands into an entirely new area are futile (because the company has no special expertise in the new area and so achieves sub-market returns there).

The same is true for mergers designed to bulk up the company’s size and thereby increase the compensation of the CEO.

This entire scheme is just ready-made to have someone, the CEO and his cronies at the top, cash out like a king – and assign large fees to the handlers and arrangers, like investment banks acting as “advisors.”

Robot CEOs would readily be able to recognize the obvious mergers and reject the futile ones. The process of merger analysis required is only moderately complex.

This brings out an important advantage of robot CEOs — their lack of conflicts of interest. By law, their programming would be forced to reflect the interests of shareholders as first priority, and to forbid them from breaking all the laws to which a modern corporation is subject.

Robot CEOs play by the rules

Robot CEOs would not be able to shade their observance of laws in the belief that “everybody does it” or that they would never get caught.

In fact, robot CEOs, not being human, would not be paid. They would simply cost what they cost. Their programming, which would be determined by corporate law first principles, would give them guidelines for resolving all the contentious points that cross a CEO’s desk.

Better yet, robot CEOs would not form close emotional bonds with people. They would hence arbitrate disputes between subordinates with monotonous fairness.

Production, finance and control would be natural to them, and they would be little worse at HR than the average human CEO, with his tendency to play favorites.

The robot CEOs’ weakest point would probably be marketing, where they would have little clue what would appeal to the average consumer.

However, this could be solved by a good human chief marketing officer, and would in any case be offset by robot CEOs’ ability in industrial marketing, where they would often be selling to other robots.

Robot CEOs would provide shareholders with better results than human CEOs for 95% of companies, 95% of the time.

Like self-driving cars, robot CEOs would never get drunk, criminal, greedy or prejudiced and so would do a better job than human CEO’s in almost all cases.

Also, as in self-driving cars, in extreme cases they would fail catastrophically, but those cases would be fewer in number than for a human CEO.

The robot CEO would work a 168-hour week or close to it. Like human CEOs, it would waste a lot of time in meetings and conference calls.

However, it would have additional reserves of time available that a human CEO does not have (because of his physical limitations, need for a social life and family, etc.).

It would be possible to mitigate further the risks of a robot CEO by using a human non-executive Chairman. The Chairman’s job would be to spot opportunities and risks for the company that were not obvious, and to identify them sufficiently forcefully that the robot CEO took them into its calculations.

Not for major public companies

By this means, most of the “self-driving car runs into a tree” events would be avoided. Companies that needed to make a sharp strategic turn would be able to do so. The non-executive chairman’s workload would be limited, perhaps to two days a week.

The ideal non-executive chairman would be older, perhaps retired from his full-time job, but with experience of a wide range of industries, not just that served by the company.

The 1960s British ideal of a merchant banker chairman would work very well if the CEO was a robot (not that merchant bankers exist any longer, but a similar generalist with excellent high-level contacts and a preference for good lunches over hard work would be very suitable.)

Conversely, a retired human CEO as Chairman of the same company would be too limited in breadth of experience, and far too governed by the assumptions of the company’s industry, many of which would have become outdated by the switch to a robot CEO.

The technology is not quite ready yet for a robot CEO to be appointed to head a major public company. However, the cost advantage of robot CEOs is obvious.

While each unit potentially commands an initial sale price of several million dollars, which is comparable to a human CEO’s salary and benefits, it’s a one-off cost – and not an annually recurring one. The rewards for the company that develops such a prototype would potentially be considerable.

The early adopters would probably be those companies with relatively simple operations that have suffered from human CEO ineptitude in recent years. The serial acquirer Mondelez (NASDAQ:MDLZ) might be one such candidate.

In many cases, once a robot CEO has been designed and bench tested, shareholders of companies that have suffered from inept management should feel that it could not do any worse than the humans under which their wealth has been eroded and opportunities missed, and would very likely do better.

The benefits of CEO robotization to shareholders are just too great. I confidently predict that we will see the first examples well before 2047 and that in general they will be highly successful.

Editor’s Note: This article was originally published in the author’s “True Blue Will Never Stain” blog.