As wives of service members become more outspoken, they're also getting slammed with misogynistic caricatures 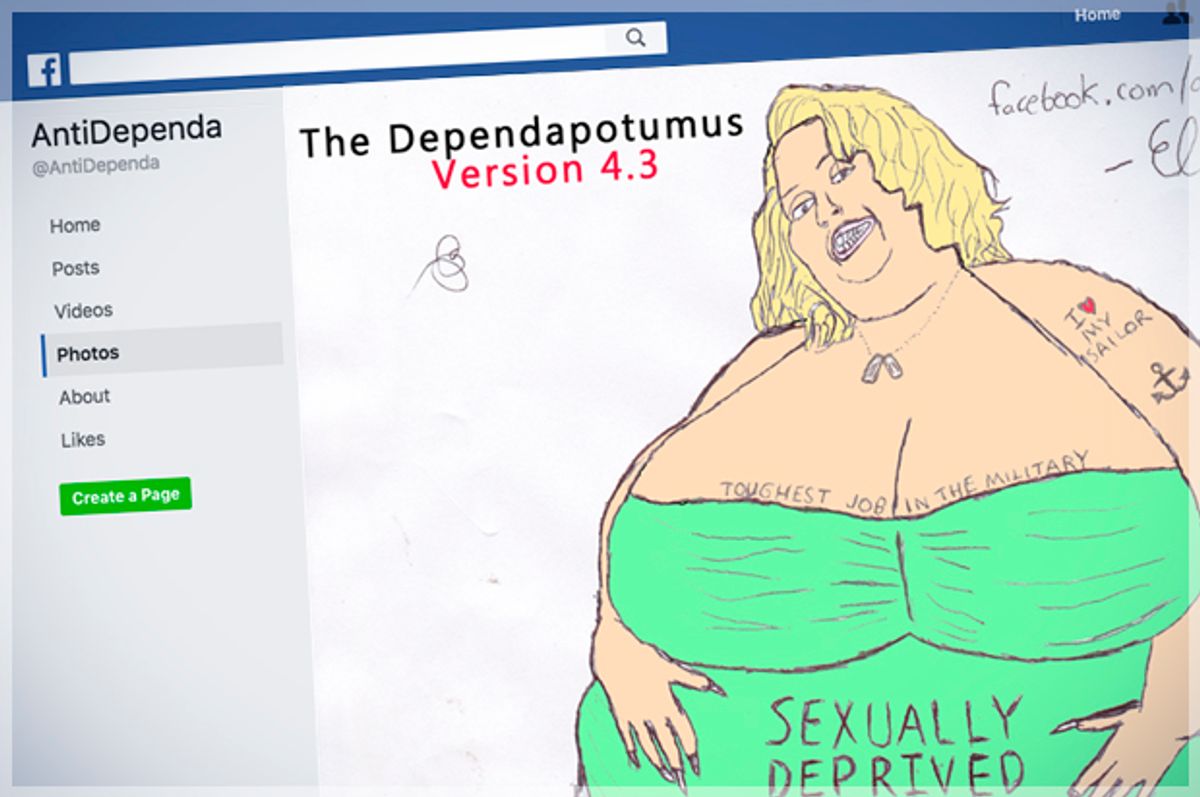 Friday was Military Spouse Appreciation Day, which was established by Ronald Reagan in 1984 to honor the sacrifices made by military spouses — which most often means women — who have to endure the frequent relocations, lengthy deployments and other life and marriage stressors that come with being married to someone on active duty. For military-centric social media, the weekend was consumed with loving paeans to the sacrifices made by loving wives (and some husbands!) who keep the home fires burning while their beloved serves his or her country.

But while most of the military is gracious toward the long-suffering spouses of servicemen and -women, there is a dark counter-narrative that percolates through military circles, both online and off. According to purveyors of this counter-narrative, all too many military wives are gold-digging sluts. Some portray the ranks of military wives as being stuffed full of "dependas," which is military slang for a wife who leeches off her hardworking husband, sucking him and the government dry — and then who has the nerve to complain about not getting even more or even sleeps around behind his back.

This stereotype is perpetuated by word-of-mouth, of course, but also through social media, primarily Facebook pages dedicated to public shaming of women deemed "dependas." Facebook pages like Dear Dependa, The Dependapotamus, AntiDependa and Dependa World have amassed thousands of followers by posting memes and stories that paint military wives as arrogant, overweight, lazy and unfaithful parasites who married their husbands only for the benefits. The sites are typically illustrated with pictures like this, from AntiDependa: These "dependas" are contrasted with "true" military spouses, who are painted as thin, unerringly loyal, hardworking and grateful enough to stay blessedly silent about the downside of military life.

"Dependa and Dependent are two totally different things," argued the owner of the Dependa as Fuck page, in an email to me. "Dependas marry for the uniform. They marry for the rank and the benefits. They don't care about the [service member]. My husband's ex-wife is a Dependa. He's fighting for our country and she's in bed with his best friend."

She insisted that her page was not sexist or cruel, arguing that the page exists "to expose those who have done their families wrong."

The owner of the Dependa World page told Salon via a Facebook chat, "The purpose of the page is to expose spouses for their wrongdoing and bad behavior and hopefully it'll educate people on how to properly conduct themselves as spouses in a military environment."

A military wife named Ann, explained the attitude behind these sites as follows: “The military spouse ‘knew what they were getting into it’ and always has to understand that the military comes first, and that’s just the way it is." (To protect her privacy, her name was changed, as were the names of several other sources in this article.) "The subtheme there is that you are second in your marriage, that the military comes first and you just have to fall in line.”

In an emotional phone conversation, Ann explained that she used to run a dependa-shaming site where she mocked other military wives for all manner of perceived sins, including ingratitude and even ignorance of how the military health care system worked.

“I was the quintessential bully," Ann said. "I felt powerless and out of control in other areas of my life and it felt like there was this one thing I was doing better than other people."

She observed, “There are a lot of things that are out of your control in this life, the military life," adding, "and it makes a lot of people feel better to establish this fake hierarchy and feel like they have some control.”

Central to the dependa stereotype is this idea that many military wives are lazy parasites who contribute nothing of value to their marriages or the community.

A dependa "lacks an identity of their own and rides the coattails of their significant other," the manager of the Dear Dependa page said in a Facebook chat while wishing to remain anonymous. The manager argued that the site only attacks people who "exhibit entitlement and a lack of personal identity."

Ann agreed that "a lot of people get tied up in their spouse’s success" in the military but argued for empathy instead of shaming. Much of the unemployment of military spouses, she claimed, is involuntary because the combination of frequent moves and high competition for the civilian jobs around military bases makes procuring and keeping a job impossible for a lot of wives.

Alison Buckholtz, a military wife who agreed to use her real name as she is a freelance writer, is skeptical that the dependa meme is about "the fact that the spouse doesn’t work." Instead, she said she thinks it's because "the spouse feels they have the right to complain" about everything from quality-of-life issues to the length of deployments for the enlisted person.

Buckholtz pointed out in our phone conversation that military wives have been dependent on their husband's incomes and benefits as long as there has been a military, but the negative stereotype of the dependa is a relatively new phenomenon. What changed, she argued, is that "military spouses started speaking up and trying to get what they feel is their due."

And Buckholtz has personal experience with this issue: She has been called a "dependa" on social media in response to her writing about some of the difficulties of military life.

"All I’m doing is speaking my mind, defining my reality and, in the process, reaching out to other women who feel the same way but don’t have the ability to speak," she said.

Buckholtz theorized that politics has contributed to the rise of the "dependa" meme. During her stint as first lady, Michelle Obama was heavily involved with Blue Star Families, an organization that's dedicated to empowering military spouses. But the military is disproportionately Republican, and many service members were predisposed to view Obama's efforts with suspicion. That, Buckholtz argued, helped contribute to this notion that any efforts to empower and support military wives are ideologically liberal in nature and inherently suspect, and that the wives need to simply shut up and be grateful for what they have.

These tensions spilled over in February when the military health care system, called Tricare, put out a social-media post that played with the idea that military wives marry their spouses only for the benefits. It was a joke that echoed some of the postings on the dependa-shaming sites, such as this popular meme: ("BAH" is an acronym for "basic housing allowance," the rent or mortgage subsidy provided to military families.)

Military wives exploded in outrage, forcing Tricare to apologize and update the post with a banal slogan.

“It’s not like you’re marrying someone in the military because you’re a gold digger," Buckholtz joked.

Ann agreed, noting that for most military families, money tends to be tight — which ironically increases pressure on wives to prove they're not dependas by getting jobs.

Unsurprisingly, the dependa-shaming websites loved the ad and were annoyed that Tricare apologized.

Ultimately, the dependa meme seems to be the result of the military's inability to keep up with changing social mores. Everything in the military, from the frequent moves to the lengthy deployments and the specialized  housing and health care system, is built around the old-fashioned assumption that service members have dependent wives to handle their business at home.

But women these days, whether they work outside the home or not, are not interested in playing the role of the silent, all-sacrificing wife. This dependa stereotype then has emerged as a way to police women for making demands or having expectations. No one is shaming unemployed military wives who keep their heads down and their mouths shut. Being a "dependa" isn't about being financially or materially dependent so much as it's about rejecting the expectation of female submission.