Who will be the next FBI director? Trump has many bad choices, but Sen. John Cornyn stands out as the worst

Sure, Mike Rogers and Trey Gowdy are low-grade partisan hacks. But John Cornyn stands out for sheer shamelessness 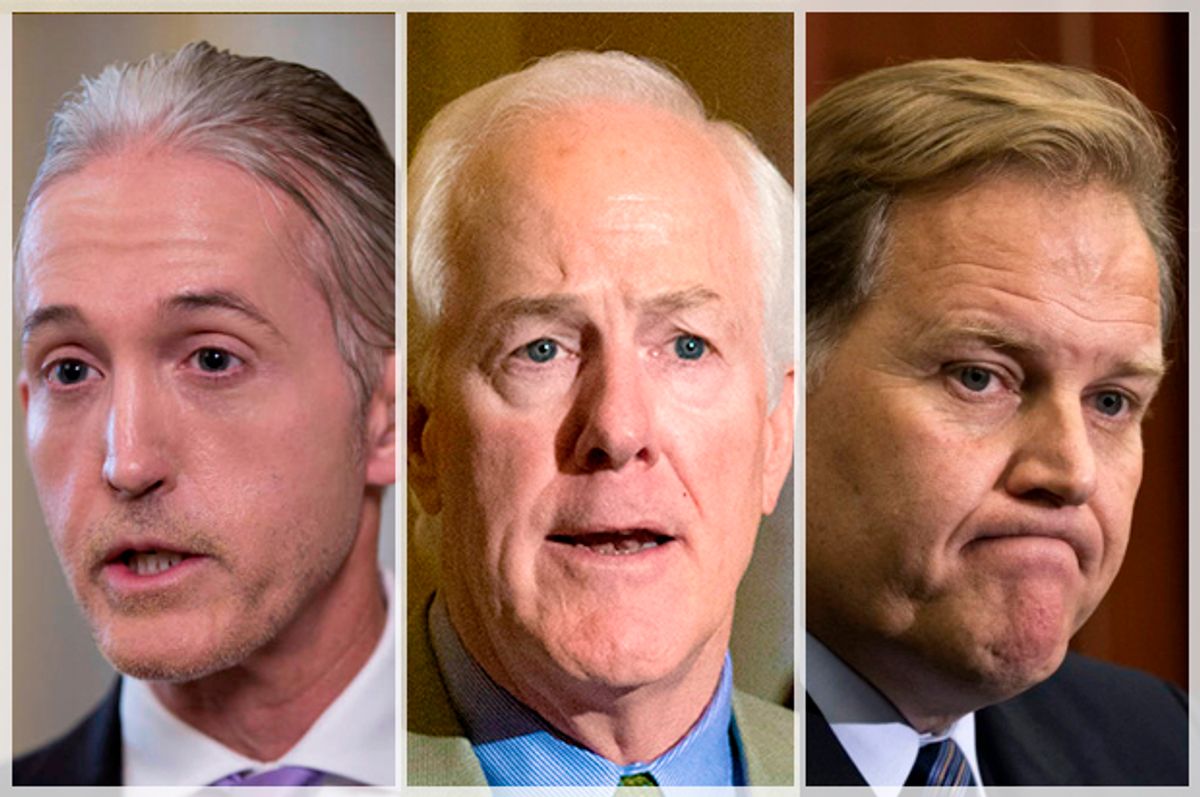 It's hard to know what the next big dramatic turn in President Donald Trump's reality series will be. He's always got a surprise or two up his sleeve. The casting of the new FBI director certainly has everyone on the edge of their seats. Remember that Trump does indeed "audition" people for these jobs, rather than vet them, and chooses them for their looks and personality rather than their experience or qualifications. So some of the people on his supposed list are very unlikely choices. I would guess that a woman, for instance, wouldn't have the image he seeks in an FBI director.

James Comey is a tough act to follow. He looked like the quintessential G-man, although his 6-foot-8 height may have contributed to his demise: Trump likes to be the tallest man in the room. And Comey made the mistake of failing to personally pledge fealty to Trump and even going so far as not doing his bidding. He may have looked the part, but on the "Trump Administration Reality Show," people must prove their loyalty to the boss.

Of course, the FBI director doesn't actually work for the president. Like all members of the U.S. government, including Trump, he works for the American people. While the person in that position may serve "at the pleasure" of the president, until now it's been understood that it's a different sort of job. It has a 10-year term specifically to take it out of the realm of the regular election cycle, so that the director could be assured of having an independent, nonpartisan role.

From what we can gather, Trump has decided that he does not consider being independent and apolitical as important requirements for this job. We know this because he has put on the short list for the job former GOP Rep. Mike Rogers (a member of the Trump transition team under Chris Christie), Benghazi witch-hunt leader Rep. Trey Gowdy and Sen. John Cornyn of Texas. There are some other names — retired judges and attorneys along with a couple of women — but those three are the names that have lit up the political establishment, which makes Trump more likely to go for them.

Rubio's colleague, Sen. Lindsey Graham of South Carolina, disagreed, suggesting that Trump pick someone from within the ranks instead. Recent history shows that either hiring a GOP politician or someone from the ranks can be a bad idea.

In 2004, after the tumultuous term of CIA Director George Tenet, President George W. Bush appointed Rep. Porter Goss of Florida, a former CIA agent, to run the agency. Salon reported at the time that he had a mission:

The White House has ordered the new CIA director, Porter Goss, to purge the agency of officers believed to have been disloyal to President George W. Bush or of leaking damaging information to the media about the conduct of the Iraq war and the hunt for Osama bin Laden, according to knowledgeable sources.

Many veterans of the agency did quit, complaining that Goss was little more than a political puppet, and he was a disaster of epic proportions as director, whining about the workload and generally failing at the basic functions of leadership. He abruptly resigned without explanation in 2006.

There's no way of knowing whether Mike Rogers would be similarly inept but he fits the profile: Rogers is a former government agent (having worked for the FBI) who became a Republican congressman and served as chairman of the House Intelligence Committee. If Rogers were to follow the Goss model, quite a few G-men will be retiring early.

It goes without saying that after his disastrous performance as chair of the Benghazi committee, Trey Gowdy is an unlikely choice. He just doesn't look the part. The only reason one can imagine that Trump would choose him is if the president is serious about reopening the investigation of Hillary Clinton, which is unlikely but not completely out of the realm of possibility.

But by far the worst of these political choices would be Texas Sen. John Cornyn. In fact, it's simply unacceptable. On paper he looks like a natural choice: former Texas Supreme Court justice turned state attorney general turned U.S. senator. In practice, there has rarely been a more nakedly partisan public servant.

Some of the highlights of Cornyn's career have included his tenure as Texas attorney general, where he was best known for his political ambition and unwillingness to investigate the notorious false drug convictions of African-Americans in Trulia, Texas, until he was absolutely forced to do so. One of his most memorably odious moments as a senator came when a spate of judges were murdered. Cornyn went on the floor of the Senate and explained:

It causes a lot of people, including me, great distress to see judges use the authority that they have been given to make raw political or ideological decisions. . . . I don't know if there is a cause-and-effect connection, but we have seen some recent episodes of courthouse violence in this country. And I wonder whether there may be some connection between the perception in some quarters, on some occasions, where judges are making political decisions yet are unaccountable to the public, that it builds up and builds up and builds up to the point where some people engage in, engage in violence.

Cornyn apparently thought the judges had it coming.

In 2013, along with fellow Texas Sen. Ted Cruz, he led the the charge against President Barack Obama's nomination of former Sen. Chuck Hagel, their fellow Republican, as secretary of defense. It was ostensibly because Hagel was perceived as being anti-Israel, but it was clear that the onetime Nebraska senator was really being punished for betraying his party and joining a Democratic administration.

If anyone is thinking that Cornyn would vigorously pursue the Russian investigation, he or she should think again. In last week's hearing with former acting Attorney General Sally Yates, Cornyn didn't even bother to ask her about it. Instead, he used his time to chastise Yates for her refusal to enforce the president's Muslim travel ban.

Another person, along with Yates and Comey, who recently heard a "You're fired!" from Trump, of course, is Preet Bharara, the former U.S. attorney for the Southern District of New York. Bharara tweeted this in response to Rubio's excited endorsement of a pair of political hacks as candidates for FBI director:

That would makes sense. But this is Donald Trump we're talking about. He's looking for someone willing to pledge his unquestioning loyalty, and Cornyn is a guy who wouldn't hesitate. Trump doesn't even have to ask.