In Trump's country: U2 takes "Joshua Tree" politics back on the road

30 years after their blisteringly political album and tour, U2 opts for subtle anti-Trump imagery over big speeches 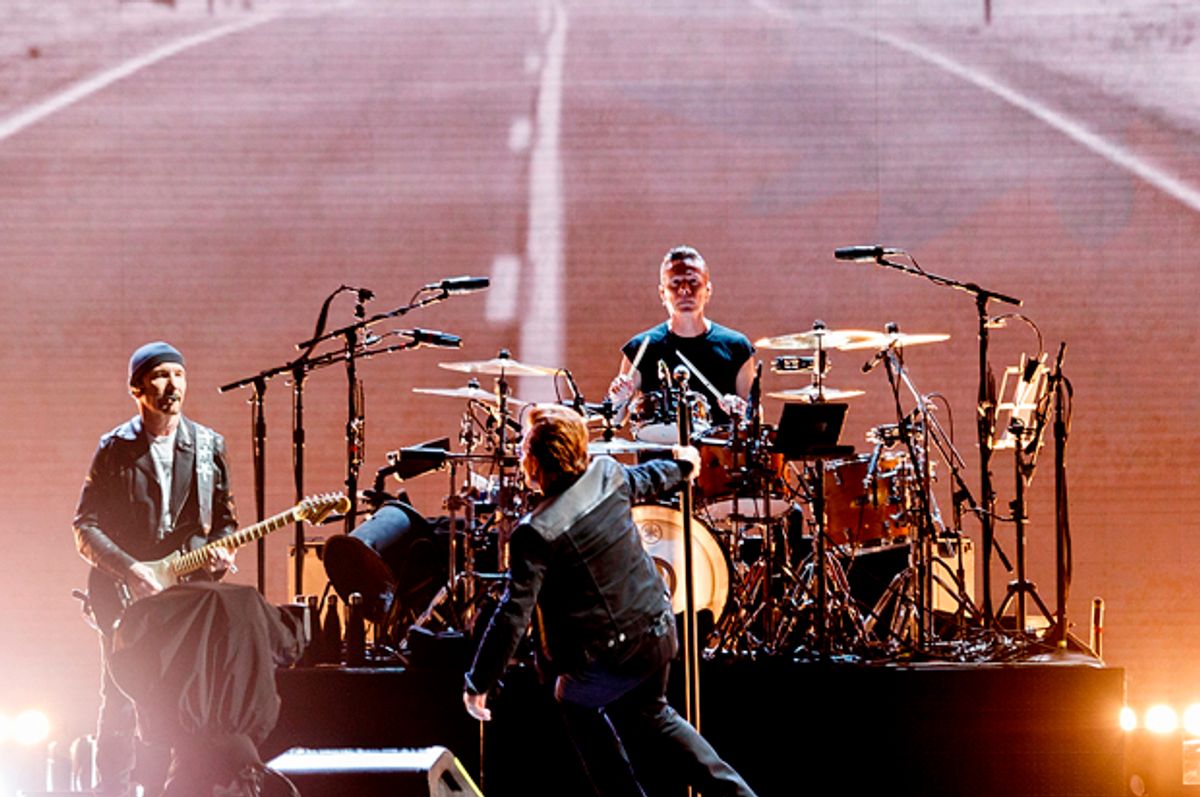 U2 during their 'The Joshua Tree World Tour' (Getty/Andrew Chin)
--

It wasn’t exactly a grand revelation that the members of U2 wouldn’t be fans of Donald Trump and his policies, but it was a fairly bold statement to make as part of an eight-song greatest hits-level set at a highly mainstream radio festival.

But post-election, and on the eve of the band announcing a tour to support the 30th anniversary of “The Joshua Tree,” Bono seemed willing to walk that stance back a bit. “I opposed Trump while all the time understanding that many of the people who support him are the kind of people I grew up with, and can see myself in to this day,” he told U2.com in an interview back in January.

A month later, the frontman made a point of meeting with Vice President Mike Pence and thanking him for voting for the President’s Emergency Plan for AIDS Relief back in 2003, while seemingly ignoring Pence’s much-criticized positions that many believe enabled a serious HIV outbreak in Indiana.

While these sorts of grip-and-grin moments have been part of Bono’s modus operandi since 2000, when he took his first steps towards attempting to shape world policy in favor of causes he believed in, beginning with debt relief, this particular appearance with the Vice-President — coming off of an otherwise thoughtful address to the Munich Security Conference, where he linked security with economic development — was alarming to many fans. Given that the stated reasoning behind the anniversary outing of a 30-year old album was that “It feels like we're right back there in a way,” as the Edge told Rolling Stone, the optics of that meeting with Pence felt like capitulation, not an act of resistance like their IHeartRadio outing.

When it was released 30 years ago, “The Joshua Tree” was the product of a two-year simmer of its cauldron of influences, musical and cultural. It was an attempt to take U2 out of their “Year Zero” mindset — anything that happened before punk wasn’t worth their time — as well as a time in which the band, both singly and as a group, increased their sphere of involvement in social causes. There would be appearances at Live Aid, Ireland’s Self Aid, Bono’s contribution to Little Steven’s Sun City project, as well as the band’s keystone participation on the 1985 Amnesty International Conspiracy of Hope tour. Bono would travel to Ethiopia with his wife, Ali, several months after Live Aid to volunteer in a refugee camp; the following year, the pair would travel to Nicaragua and El Salvador and see a negative side of U.S. foreign policy. Back then, the Edge told Rolling Stone, "There is a tradition in America . . .of people in rock & roll holding a mirror up to what was going on around them. Asking awkward questions, pointing out things. I suppose ‘The Joshua Tree’ is in that sort of tradition."

Although merging politics into rock and roll was hardly new to U2, beginning with 1983’s “War” anthem “Sunday Bloody Sunday,” these larger, global experiences (among others) would have a decided presence on their fifth album, which was originally going to be titled “The Two Americas.” On “The Joshua Tree”, this would range from Bono telling the Edge to “put that [El Salvador] through your amplifier” on “Bullet the Blue Sky,” the nod to Chilean political activist Victor Jara in “One Tree Hill,” and the tribute to the Madres de Plaza de Mayo in “Mothers of the Disappeared,” among many more.

On tour in 1987 to support the album’s original release, Bono would give nightly shout-outs to Amnesty International, who set up tables in the venue lobbies each night. There would be invocations to Ronald Reagan during “Bullet The Blue Sky,” stories about friends lost to heroin before “Running to Stand Still” or “Bad,” and the occasional topical reaction to events in the news, such as the April 1987 protests against American policy in Central America, or November’s Remembrance Day IRA bombing in Enniskillen, Northern Ireland. Otherwise, despite the music’s highly topical origins, there was no grand speechifying from Bono, and it was not a tour with any message that far beyond what was contained in the songs — although that on its own was significant.

The 2017 version of “The Joshua Tree” kicked off last Friday night in Vancouver, B.C., and while the performance at IHeartRadio appeared to foreshadow a more confrontational stance from the band this time out, Bono insisted that was not going to happen. In the U2.com interview, he stated that the tour would be “a high-voltage meditation on what’s happening now,” and that “This is a tour for red and blue.” The set, as it stands now, is not a politically neutral performance in any fashion, and the band’s message is even more damning than that pre-election outing. The band directly and repeatedly references civil rights, women’s rights, the refugee crisis, and points another direct finger at the current administration. In Vancouver, Bono saluted Canada by saying, “When others have closed their doors, yours are open,” during the bridge of “Pride,” their song about Martin Luther King. There would be several other direct references to the refugee crisis throughout the show.

“In a democracy, the government should fear the citizens, not the other way around” is how the band introduced “One.” But the most damning — and yet, most subtle — statement would come at the introduction to “Exit,” the song in the middle of what the Edge once referred to as “the suite of death” on side two of “The Joshua Tree.” “Exit” was almost called “The Executioner’s Song,” and it is dark and malevolent. In Vancouver, the performance of “Exit” was preceded by a video from a 1950’s TV show called “Trackdown.” In this clip, from an episode called “The End of the World,” a con man named Walter Trump rides into a Western town, warning that he is the only one who can save the residents from disaster . . . by building a wall. “Trump, you’re a liar!” one character yells, before the screen goes dark. Without a word, the band segued into the first performance of “Exit” in more than 27 years.

A more uplifting positive response would come later in the set, during the performance of “Ultraviolet” from 1993’s “Achtung Baby.” “We will dedicate the next song to the great women that we know,” Bono said, listing the band’s wives by name, before continuing, “. . . our mothers, our daughters, the women on our crew, the women in the audience that we feel we know, and to great women far away, in circumstances we don’t know. Women who stood up, who sat down for their rights, who resisted and insisted and persisted, you light the way.” The song was illustrated by a stream of images of women’s movements and famous, infamous and inspiring individual women throughout history, including Sojourner Truth, Rosa Parks, Maya Angelou, Alice Walker, Pussy Riot, Rosetta Tharpe, Grace Jones, Joni Mitchell, Emma Goldman, Patti Smith, and many more

Will U2 add any more commentary to the show, based on current events? Will Bono become more explicitly vocal? In Seattle, two days after the tour opener, Bono gave a statement to the Irish Mirror once again insisting that Trump voters were welcome at their shows (but the President himself was not). It seems hard to believe the band — and their singer — wouldn’t have more to offer as events progress in Washington and elsewhere. With 20 more shows in the States and 12 in Europe, it will be interesting to observe if and when U2 decides to employ their regular access to a stage and a microphone to expand their statements beyond their current sentiments, and how they choose to execute it. Even if they don’t, the show as it stands today remains a potent missive aimed at the White House.