What “Twin Peaks” Season 3 takeaways can be found in a New York tribute event? 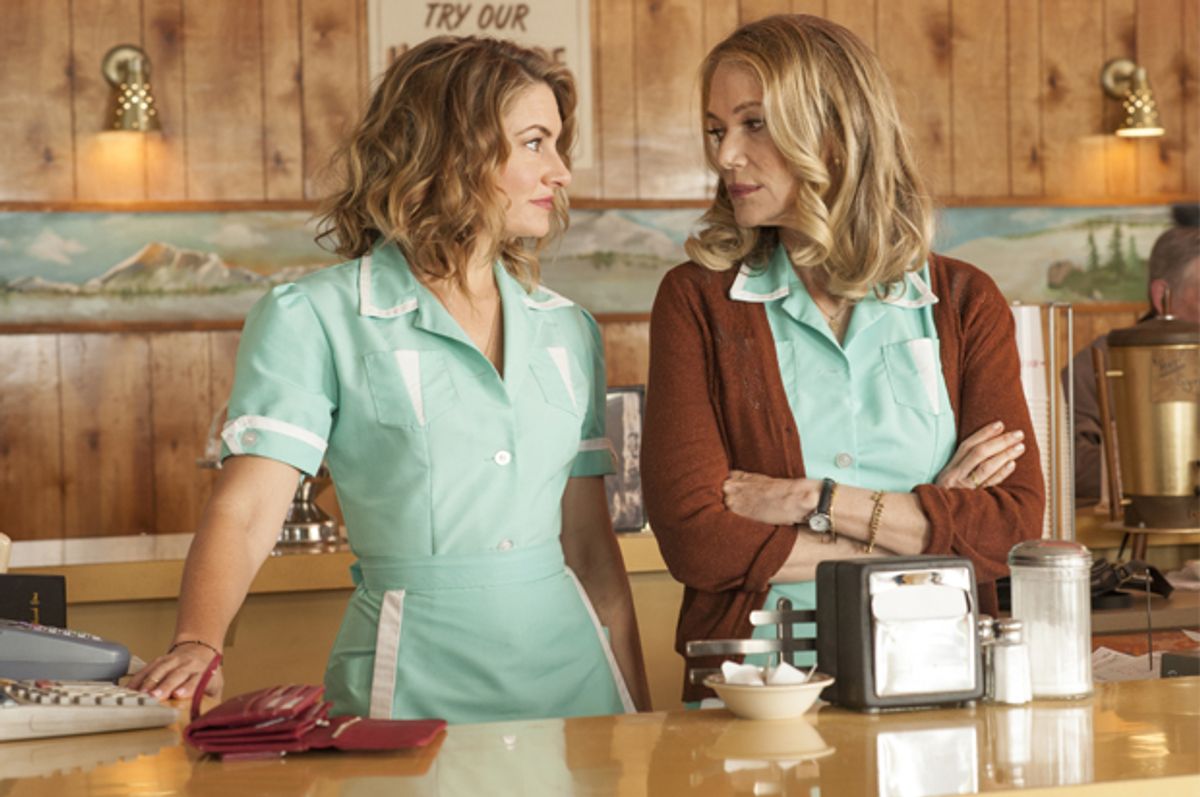 “Now that is a damn fine cup of coffee.”

I had to say it. What else does one say when sitting in the Double R Diner, plate of cherry pie before them, swallowing a small gulp of dare I say exquisite black coffee? And yet, coming out of my mouth the words didn’t sound quite right. I looked around. There was the log lady, sitting on a bar stool a couple down from mine, whispering cryptic messages to the friend I had come with; and there was Deputy Hawk, Leo, a few Bobs, even a deceased Laura Palmer, all on line for pie and coffee. But no sign of Agent Cooper.

It was just past 7:00 p.m., and I was not, of course, in the northwest’s most famous fictional logging town’s most famous (sort-of) fictional diner, but in a set-sized recreation. The diner was but one “Twin Peaks” installation erected on Tuesday in the Brooklyn Bazaar, a vast event space in Brooklyn’s trendy Greenpoint neighborhood. With five days to go before the start of the first “Twin Peaks” season in 26 years, the Bazaar, along with Flavorpill, BBQ Films and Showtime, was hosting an immersive tribute to “Twin Peaks”— essentially, a Comic Con with no capes but lots of denim.

The event spanned three floors of the Bazaar and was a choose-your-adventure of sorts: eat pie and drink coffee at the Double R, sing karaoke and get your picture taken downstairs in the Twin Peaks Lodge, get a drink and see a band play upstairs in the Black Lodge, mingle with fellow townspeople in the Palmer living room. Me, I wanted to know where Agent Cooper was — well, that and, more importantly, where he’d be come Sunday night.

So when Audrey Horn came ambling through the diner, I asked her: “Audrey, where’s Agent Cooper?”

"I don't know,” she cooed. “If you see him, tell him I have a favor to ask. I've left so many messages on his phone. I have a lot of important things to discuss with him."

I asked what she had to discuss with him, hoping to arrive at some clue about whether a cackling demon would still be inhabiting his body 26 years after the show left viewers hanging on this image. But my detective work was in vain. These costumed simulacrum — at least the hired ones — didn’t know any more than I did, and even if they had, they wouldn’t have veered from an animatronic fealty to the original text.

That is, except when they took to the various stages set up around the Bazaar. Moments after Audrey sauntered off, for instance, she was on the stage, stripping out of her clothes.

But let’s rewind to one of those intervening moments, after our conversation and before her disrobing. Twin Peaks Deputy Sheriff Andy Brennan was introducing himself. “Folks, I have been waiting 25 years to say this: Welcome to Twin Peaks,” he sputtered, his incantation uncannily like that of the dozy Twin Peaks Sheriff’s Deputy. He did a bit about recently receiving the good news that his girlfriend, Lucy Moran, is pregnant, and then explained: “We are members of a local burlesque team called Pink Room Burlesque. We professionally dress up and take off our clothes based on characters from a television series that was canceled after its second season 25 years ago. So you're about to get a new season, we're about to get new material.”

Burlesque may have disrupted the “Twin Peaks” immersion, but it did so naturally, with the same mixture of kitsch, humor and sexiness as the show. When a performer dressed as the waitress Norma Jennings took off her clothes, she was wearing stickies with dangling cherries; her dance included splashing herself with coffee and rubbing her fingers in pie. The primary function of the burlesque may have been to fulfill some fans’ fantasies — and the many sets of rapt eyes said it did just that — but it made for a nice metaphor for the evening, too: Everyone was there to peak behind the figurative curtain of the show.

A New York filmmaker named Cooper Miller, who was attending the event dressed as Dr. Lawrence Jacoby, explained the appeal of the evening to me like this: “People in New York especially love to take on other identities. Sometimes the modern existence is so dependent on your identity. Everyone has to portray themselves a certain way. I feel like these are moments where you really get to let loose and get weird and have fun and be someone else other than yourself. These are the moments that make the New York scene kind of distinctive.”

His wife, Juliette Richey, who was dressed as the log lady, added: “And ‘Twin Peaks’ is a particularly great show for that. Every character on that show is like the weirdest character ever — whether you're a detective or a log lady who lives in this town.”

“Twin Peaks” is a show that in all facets lends well to recreation. It has a vast collection of distinctive characters, it has borne many famous quotes and phrases, and its schlocky soap opera sets can be cheaply reconstructed.

But it’s that very quality that might give fans trepidation about its return. It would be easy for the show to become fan fiction of itself — as, it could be argued, the “Twin Peaks” movie, “Fire Walk With Me,” was.

Cooper and Juliette told me that their hope for the reboot is that David Lynch and Mark Frost will continue to expand the Twin Peaks universe. “I've talked to a lot of people about how there's a drop off in the second season, right around the time you get introduced to the shut-in character,” Cooper said. “At that point, the show kind of gets slow and enclosed. The world building gets reduced. So I think that they'll be okay so long as they keep the world expanding organically and not forcing new characters in.”

“I'm okay with a series passing on the torch to new characters, but you've got to do it in the right way,” Juliette added. “I think as long as they stay true to the art direction and it being campy but not to a point where it's cheesy, it'll be good.”

It seems likely that the show will fulfill Cooper and Juliette’s hopes and do significant world building this season. The show has added big-name actors such as Laura Dern, Naomi Watts, Michael Cera, Jim Belushi and Jennifer Jason Leigh to its cast. And David Lynch, who has done far more painting than filmmaking over the past 10 years, isn’t the type of director who takes on projects he isn’t passionate about.

There’s an extent to which what we’re all most craving is to see Agent Cooper take a sip of coffee and recite those famous lines or  uncover what’s become of him. But whether the show is successful as more than nostalgia-fulfilling self-imitation basically boils down to whether it’s able to give Pink Room Burlesque strong new material. Will Lynch and Frost create new touchstone references that can be incorporated into a cultish striptease or will they fall back on the old ones? If in 25 years another “Twin Peaks” tribute is held and dancers dressed like, say, Michael Cera’s character are fulfilling fans’ fantasies you’ll know the reboot was really damn fine.