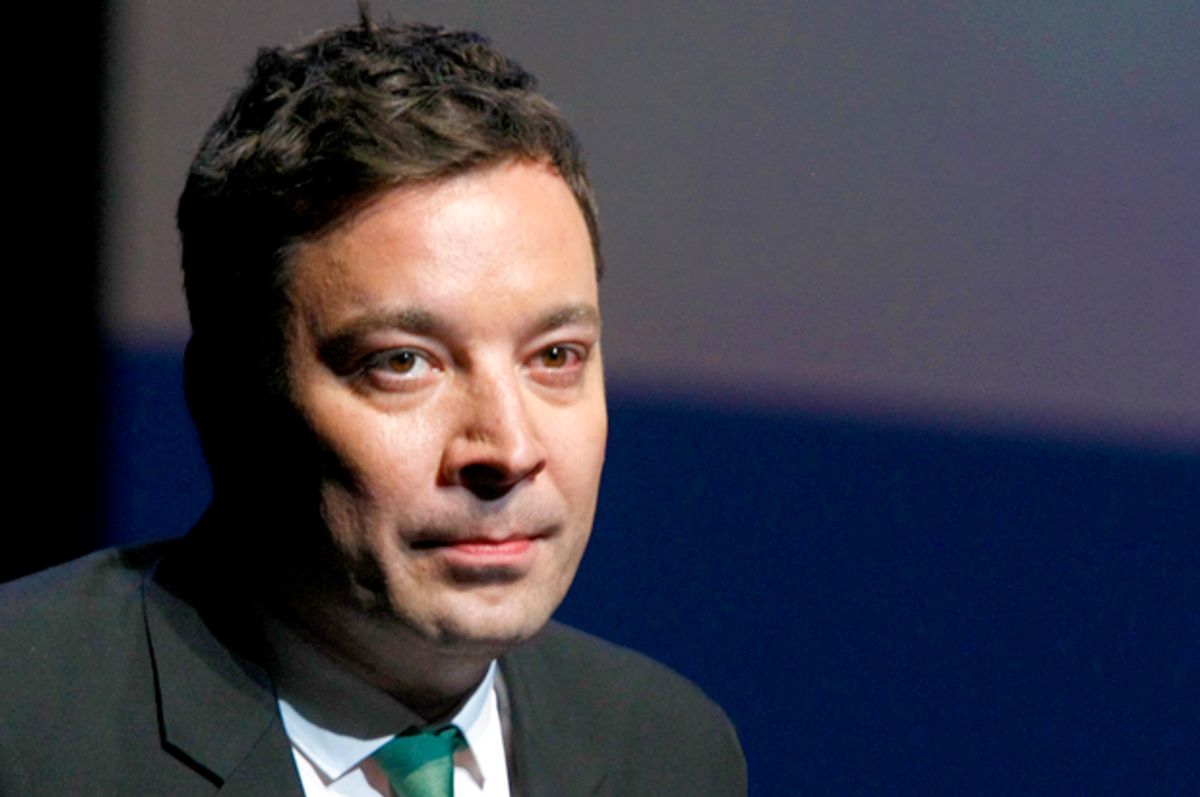 Last fall, candidate Donald Trump made an appearance on the “The Tonight Show With Jimmy Fallon,” and exited as he so often does — a supervillain walking unscathed out of a burning building. The interview, what with the host’s amiable treatment of Trump and the infamous “hair-tousle,” earned Fallon accusations of normalizing an extreme and dangerous politician. It was a disaster for the NBC star.

In a recent interview with New York Times reporter David Itzkoff, Fallon expressed his regret at the way the segment was perceived.

“They have a right to be mad,” he said. “If I let anyone down, it hurt my feelings that they didn’t like it. I got it.” Acknowledging his lackluster response to the controversy, he added, “I feel like it’s sailed. I haven’t talked about it at all.”

Yet amid this image crisis, Fallon seems naively indifferent to optics. Despite the Page Six story that ran last October concerning Jimmy’s drinking habits and NBC’s subsequent warning to cut back, nothing stopped him from cracking a “lukewarm can of Budweiser” after a filming a sketch in plain view of his interviewer.

Yes, the internet is cruel and unmerciful —  that’s nothing new. But for a TV  personality whose popularity in large part rested on his once-forward-thinking use of Twitter, whose name became nearly synonymous with “hashtags,” this fear of his favorite platform feels at best childish and, at worst, hypocritical and fraudulent. His naiveté, which enchanted audiences in happier times, is waning, and so is our tolerance for it.

As Itzkoff noted, our growing intolerance has had an impact on the single metric that matters most in network television. “Mr. Colbert usually surpasses Mr. Fallon in overall nightly audience," he writes. "In a recent week, Mr. Colbert drew more than three million viewers, while Mr. Fallon had just under 2.7 million.”

That said, Itzkoff seems to share the sympathetic opinion of Fallon that many of his sources — Seth Meyers, Lorne Michaels, and Tina Fey to name a few — harbor. It’s easy to imagine many of Itzkoff's readers will too. But Fallon’s fate rests in a realization he may or may not ever reach, the one we all come to at some point in our adolescence: what we want doesn’t always come first, and it’s certainly not the only thing that matters.

And what Mr. Fallon wants, simply put, is to be funny. “I don’t want to be bullied into not being me, and not doing what I think is funny,” he said. “Just because some people bash me on Twitter, it’s not going to change my humor or my show.”

It’s hard to fault him for defending the value of a good laugh unsullied by political ugliness. The problem here isn’t that Fallon’s buoyant, apolitical brand of humor and escapism. isn’t appealing. To the contrary: It feels like a luxury to be rationed in wartime.

Audiences want realness in a time when the unthinkable happens, week after week, someone to ground them, to confirm that no, they are not going insane. Looking for distractions is futile when it’s impossible to be distracted from this political nightmare, so maybe the class clown simply isn’t the right person for the job anymore.

We can harp on Fallon all we want for normalizing an extreme candidate, for failing to take a stand in a climate of uncertainty and alarm. But what do we expect? America fell in love with him for his playful antics, his inability to be serious or keep a straight face. But Fallon’s inherent boyish charms read as just that: boyish.

The rest of the late-night gang — Stephen Colbert, Seth Meyers, John Oliver, Samantha Bee, Trevor Noah — are, at even in their funniest moments, essentially serious performers. Next to them, the NBC host feels like a little kid trying to play with the grown-ups, a boy swimming in his dad’s suit. It’s hard to even imagine what a “hard-hitting” Fallon bit might look like.

Critics cry for Fallon to grow up, but will we still like him if he does?