Still unbreakable: The education of Kimmy Schmidt continues in season 3

Just when she thought she was out of the bunker, Kimmy's past pulls her back 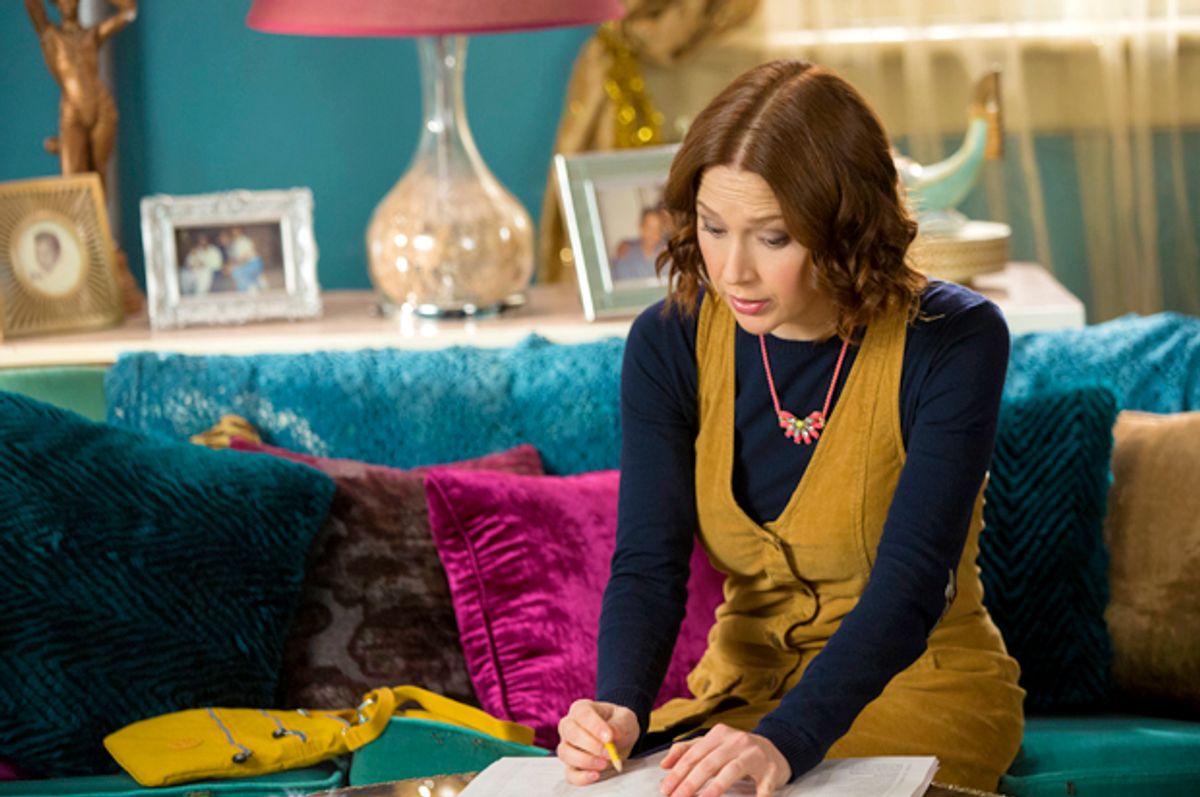 Life is one long continuing education class for doomsday cult survivor Kimmy Schmidt, a woman who emerged from an underground bunker in Indiana two seasons ago with a bright smile on her face. Kimmy was overjoyed to see the world intact and, more than that, bursting with color, too. Kimmy wore that attitude wherever she went in her new home of New York City, her childlike uniform of bismuth pink and Big Bird yellow announcing her attitude as loudly as her smile.

Millimeters beneath that rainbow-hued candy coating, “Unbreakable Kimmy Schmidt” is a dark survival tale. Most viewers know that though Kimmy never directly admits it, she's a rape survivor. The show's excellent second season dove headfirst into her struggles with PTSD and submerged anger at her mother — but hilariously! Yet Ellie Kemper’s irrepressibly cheerful portrayal of Kimmy and the character’s resilient innocence still might lull a person into thinking that what he or she is watching is safe.  But in case you haven’t noticed, nothing feels safe anymore.

Season 3 of “Unbreakable Kimmy Schmidt” arrives on Friday, and the Netflix comedy might as well have emerged from one bunker only to find itself in a much larger one — say, about the size of the entire United States. That America promises endless opportunity and second chances, as long as a person has the will to make it happen, as well as enough money, the right skin color and an acceptable sexual orientation.

You can do it as a woman, but that’s mostly true for white women. Females are strong as hell, but when it comes to shattering that glass ceiling, the struggle is real.

Defining identity has been central to the narrative of “Kimmy Schmidt” since its freshman season, as have debates concerning cultural appropriation and privilege. The writers continue teasing the audience with subplots that speak to social and political topics that dominate current events and, to some extent, use Kimmy as a surrogate who speaks to our collective sense of confusion surrounding political correctness.

Even as it achieves this, "Kimmy Schmidt" remains a live-action animated farce populated with outlandish characters interacting with a slapstick-happy world as if it were created by Tex Avery. Every line of dialogue propels a jest, and punchlines rain down in thick hailstorms, servicing much larger jokes taking up swaths of space within each episode’s story arc.

But in the tradition of classic animation, the viewer is always aware that an anvil could drop on Kimmy’s life at any moment. In the new season’s third episode it thuds on her doorstep after season 2’s cliffhanger, when her captor Richard Wayne Gary Wayne (Jon Hamm) announces his imminent. remarriage and demands a divorce.

That would have been fine with Kimmy if only she could have maintained some distance from the implications of signing those papers. Alas, the reverend’s bride-to-be Wendy (Laura Dern) shows up on Kimmy and Titus’s doorstep, forcing Kimmy to decide whether tangling with the past is truly worthwhile. For in Wendy and a fellow bunker survivor, and the other women in her life, Kimmy begins to see the ways in which this man's world is stacked against women and, even more miserably, how some women choose to surrender in the face of that truth.

In these new chapters Kimmy continues her forward march of progress by seeking a college education. Initially she sets her sights on such prestigious local institutions as Roy Cohn Community College and Hudson University (“As Seen on ‘Law & Order: SVU’! brags the brochure) but is inspired to lift her expectations by a new friend (Daveed Diggs), who, like her, knows the value of determination and bootstrapping his way to his goal.

Of course, in keeping with that overarching emphasis on a rigged system, her road is laughably easier than his. “Kimmy Schmidt” integrates this and similar issues into its plot economically and with impish élan. The writers contemporaneously acknowledge the value of examining these topics while lampooning the increasingly frequent tendency to police uncomfortable comedy. Remember, this is a show that thrust Kimmy’s black gay roommate Titus Andromedon (Tituss Burgess) onstage to play a geisha named Murasaki (his character’s incarnation in a past life, we’re told) in a one-man show.

To speak to the thorny issue of urban food deserts and gentrification in an upcoming installment, the writers insert a plot in which Kimmy’s landlady Lillian (Carol Kane), a defender of their hardscrabble neighborhood of East Dogmouth (!), goes to war with the owner of an upscale organic grocery store chain called Big Naturals.

All this comes after the harsh criticism the series sustained in its first year, regarding the hidden Native American heritage of Kimmy’s bumbling blonde employer Jacqueline, played by white actress Jane Krakowski. Instead of apologizing, series creators Tina Fey and Robert Carlock doubled down on that subplot in season 2, bringing us to Jacqueline’s (or Jackie Lynn’s) third-season quest to get the Washington Redskins to change the team’s name.

Within the six episodes of the new season made available to critics are signposts that series creators Tina Fey and Robert Carlock have been monitoring the ways that the public’s fervent discussions surrounding all those ideas have evolved, and they have responded accordingly.

Third season's Kimmy Schmidt has come a long way from her guileless first-season incarnation, likely an effect of living with Titus, Jacqueline and Lillian, a woman who appears to be devolving into a "Sesame Street" garbage dweller as time lurches forward. Kemper reflects her character's psychological transition believably without losing any of bubbly pep in the process. Burgess and Kane generate most of the laughs as always, though Titus is granted a storyline that allows the character to reveal a measure of insight and wisdom previously muted by his foolishness. Kane takes up the standard on that front as Lillian trips headlong into local politics and soon mimics the behavior of a certain orange-hued, widely loathed New York native.

The impact of New York City itself cannot be underplayed either, and indeed, it’s the confluence of Kimmy’s personal and public environs that has resulted in a character who less likely to accept black and white statements and the people who utter them at face value. In this respect and many others, Kimmy’s adventures as an undergrad grant the writers fertile ground upon which to sow scathing observational humor, especially as the bemused but eternally open-minded Kimmy does her darndest to figure out what it means to be socially enlightened.  “Man, you guys are so smart,” she chirps to a group of acquaintances, quickly following that with, ”Oops, I just called you guys ‘guys’. Sorry! And, can I say man? Boy, this hard. Now I said ‘boy.’ Oh, brother. Help me!”

The real joke here is that Kimmy is smart, too, and in ways her cocky cohorts cannot fathom. The foundation of that intelligence is her early, horrific lesson in survival, tangibly demonstrated in her ability to smile through physically punishing shifts turning the bunker’s “mystery crank,” or her defiance of the reverend’s attempt to convince her and her fellow captives that they’re “dum- dums” or “garbage.”

What’s awakening in her is an amplified version of critical thought, where she’s able to see the world not only for its wonders, but also for the inherently unfair advantages it grants to some people at the expense of others.

Don't worry about its underlying themes too much because three seasons in, the humor in "Kimmy Schmidt" is still among the sharpest and brainiest on television. A surfeit of double entendres and the brazen giddiness that shapes Kimmy’s world allow more than enough room to ignore many of the season's heavier concepts, but why would a person want to? Kimmy herself proves that darkness can fuel and illuminate the way forward in fascinating ways, and her ability to overcome makes the character come alive. Dammit.