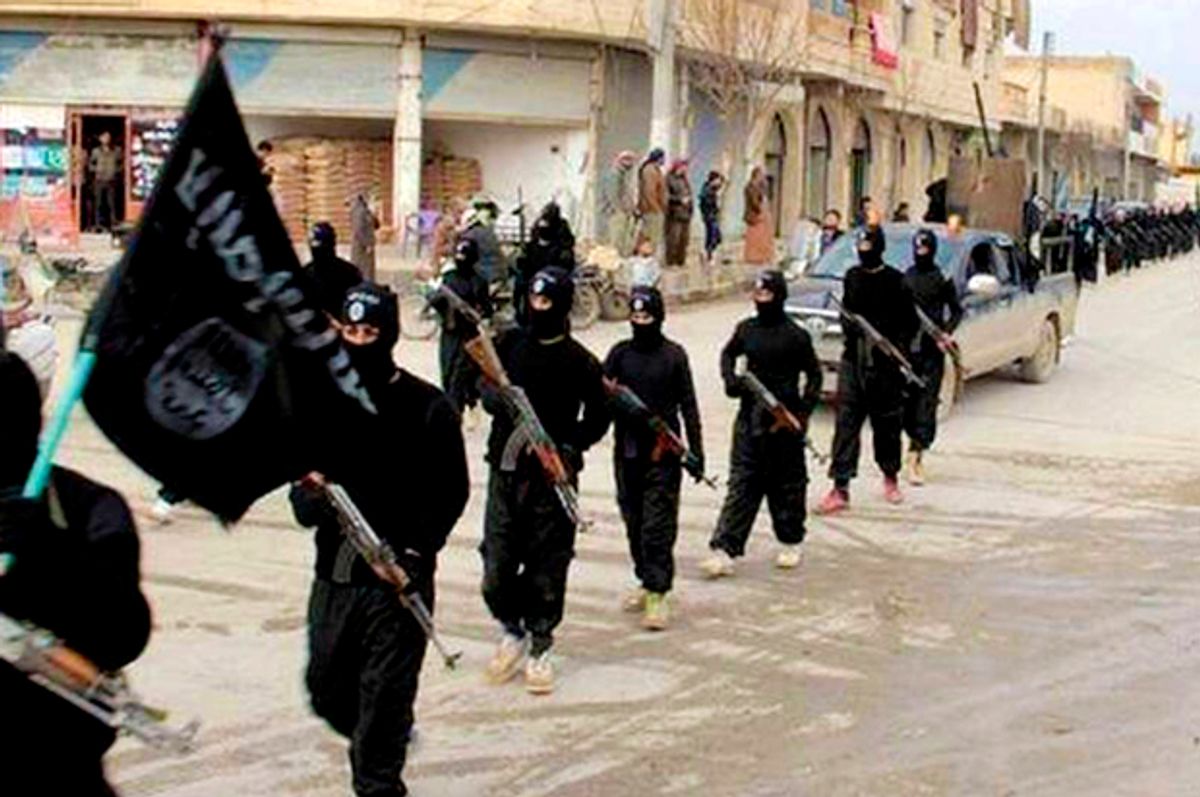 One of the biggest tension points for gun industry apologists in this country is the issue of terrorism. On the one hand, the conservatives who make up most of the gun industry's customer base think of themselves as stalwart defenders of Second Amendment "rights." On the other hand, the same conservatives like to imagine they are tough on terrorism. That's a problem, because the lax gun laws in this country are perhaps the biggest friend a modern-day terrorist has, as evidenced by the high-profile shootings in San Bernardino, California, and Orlando, Florida, in the past year and a half.

For the right-winger who wants to feel tough on terrorism but soft on guns, this tension has long been difficult to resolve. It became a lot harder at the beginning of May, when ISIS openly praised the U.S.' lack of gun control. In response, the NRA released a video trotting out a wild conspiracy theory, claiming that ISIS is praising lax gun laws in an effort to dupe gullible Americans into supporting gun control.

Earlier this month, The Washington Post reported that the online ISIS propaganda magazine Rumiyah "encouraged recruits in the United States to take advantage of laws that allow people to buy firearms without having to present identification or submit to background checks."

The magazine outlined a number of loopholes that allow would-be gun buyers to evade background checks — loopholes that gun-safety activists have been trying to shut down for years.

"In most U.S. states, anything from a single-shot shotgun all the way up to a semi-automatic AR-15 rifle can be purchased at showrooms or through online sales — by way of private dealers — with no background checks, and without requiring either an ID or a gun license," the Rumiyah article explained.

The folks at ISIS may be brutal terrorists, but they are well-informed on the facts: Due to pressure from the NRA and other pro-gun organizations, it is disturbingly easy for someone who wants to shoot up a public place to evade a background check that might prevent him or her from getting a gun.

"For years, international terrorist organizations have urged recruits to exploit those loopholes to get guns and carry out attacks on the U.S.,"  John Feinblatt, president of Everytown for Gun Safety, wrote to Salon in an email.

The Rumiyah article is just the latest example. In 2011  al-Qaida released a propaganda video making similar arguments about the ease of gun purchase in the United States, encouraging its sympathizers to take full advantage. Earlier this month, the FBI arrested a man who was trying to buy a gun online (a common way to evade background checks). It appears that the man was caught not because he wanted a gun but because the FBI was already investigating him after he started posting ISIS propaganda on Facebook.

This kind of thing is uncomfortable for the NRA, whose "law and order" image is seriously undercut by NRA-backed policies that make it easier for terrorists to spread mayhem. Part of the NRA's solution appears to be promulgating outlandish conspiracy theories to deflect uncomfortable questions.

Grant Stinchfield, who hosts a program on the pro-gun group's branded broadcasting outlet NRATV, went on a mind-boggling rant on May 12. He tried to discredit The Washington Post story by claiming that ISIS praise for lax gun laws is some kind of 11th-level false flag operation.

The Post and other media outlets are "being used as terror pawns," according to Stinchfield.

"By urging ISIS supporters to buy guns at gun shows," Stinchfield speculated, ISIS hopes to "freak liberals out" and trick them into pushing "for more gun control."

Via email, Feinblatt declared, "The NRA has long denied that our weak gun laws make it easier for terrorists to get ahold of guns, even as ISIS and al-Qaida publicly encourage their recruits to exploit our laws and commit acts of terror." He added, "Now the NRA is peddling an outrageous conspiracy theory to mislead Americans."

Let's be clear about one thing: ISIS involves a conspiracy. It just isn't all that elaborate or mysterious a conspiracy. What its proponents are conspiring to do is pretty simple: Convince their sympathizers in the U.S. to kill a bunch of people with easily obtained guns. There's no elaborate mind game going on here besides the one Stinchfield is trying to pull on his right-wing, paranoid audience.

Before the Rumiyah article appeared, liberals and gun-safety advocates were not lacking evidence that ISIS-inspired terrorists would exploit easy access to high-powered weapons. The aforementioned shootings in San Bernardino and Orlando offered gruesome examples of how demented people inspired by overseas terrorists, plus easy access to firearms, can add up to an appalling body count.

Stinchfield's video points to a larger problem: the right's increasing comfort with outlandish conspiracy theories, a phenomenon that has long been evident but that appears to be escalating in the era of Donald Trump. The NRA, which spent a record $30 million on Trump's campaign, is a real leader in this right-wing stampede toward paranoia.

"Like the NRA generally, the NRA's media arm engages in a lot of conspiracy theories — too many to count," said Tim Johnson, the guns and safety program director for Media Matters, in an email to Salon. "They do this because often there isn't a factual basis for the policies the NRA supports. For example, the NRA's magazine falsely claimed Obama would ban all ammunition before he left office."

While the May 12 segment was presented as Stinchfield's personal opinion, Johnson argued that viewers should be careful not to let the sponsoring organization off the hook.

“The NRA and its media arm are essentially inseparable," Johnson said. "It is really hard to separate the media arm from the larger organization because their messages are exactly the same — sources like NRATV are simply an unfiltered way to propagate NRA priorities to a larger audience.”

Johnson compared NRATV with "burgeoning 'alt right' outlets and Alex Jones’ Infowars," particularly in their avid support for Trump. It's an apt comparison, as the content on NRATV, right down to the conspiracy theories, is almost indistinguishable from what one might find on Breitbart News or other bottom-feeder right-wing sites.

NRATV has a lot of seemingly apolitical lifestyle content meant to appeal to gun aficionados, as well as programming that seems like mainstream conservative fare. It's a perfect vehicle to draw in ordinary conservatives and start selling them on lurid conspiracy theories like Stinchfield's. The NRA has played a huge, if still underrated, role in creating the fact-free ideology that fueled Donald Trump's political movement.