The devastating intimacy of HBO's "The Wizard of Lies" 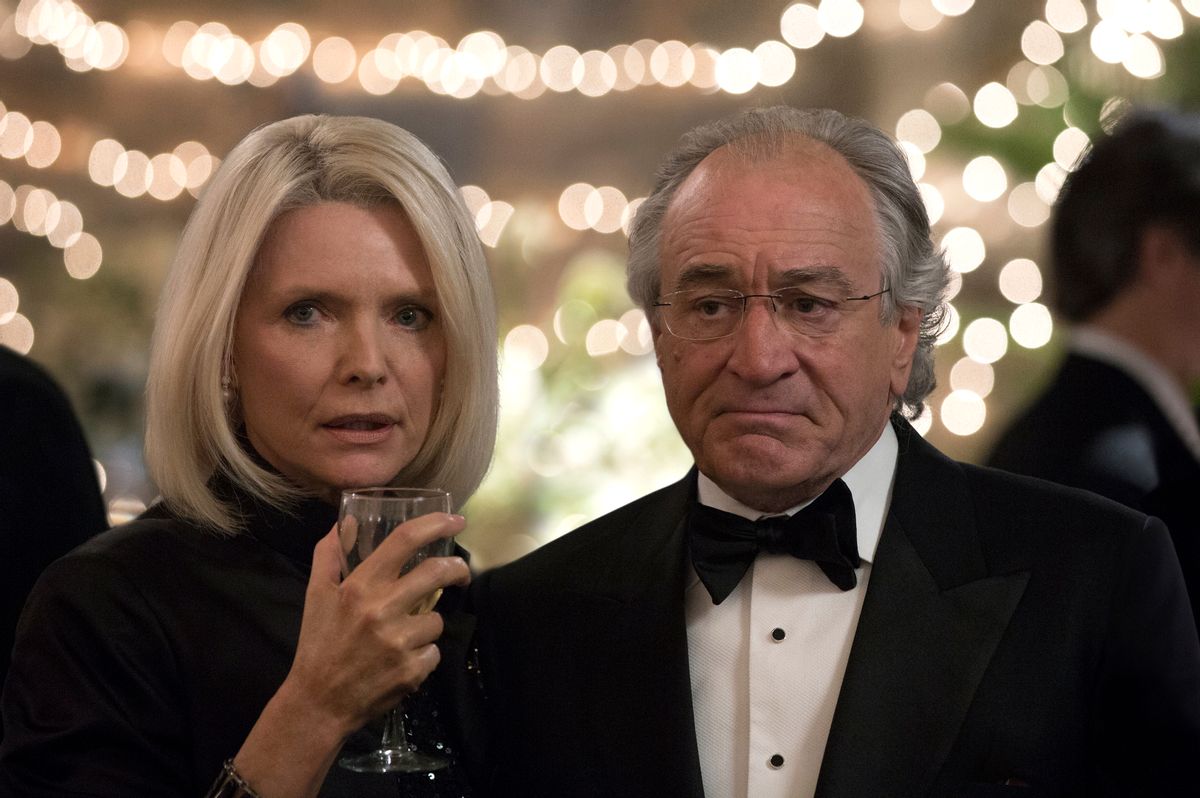 Even in the midst of the direst economic meltdown in modern times, Bernie Madoff was the life of the party. A scene in HBO’s “The Wizard of Lies” shows the notorious Wall Street swindler, played by Robert DeNiro, at a Palm Beach black-tie event in October 2008. Even as his right-hand man Frank DiPascali (Hank Azaria) is warning him on the phone of the massive panicked withdrawals his investors are calling in, Madoff is working the whales in the room, persuading them to commit hundreds of millions of dollars to his dishonest scheme.

Some are hesitant. Others chase him around, given that his fund appears to be a safe harbor at a time when all other ships are going down. And you know what they say about appearances.

Then his wife Ruth (Michelle Pfeiffer) comes up to him and mentions by the by that her sister was worried about the economy and was thinking about investing the rest of her savings with him. His sister-in-law. Family.

“Would that be OK?” Ruth asks, and in less than the space of an exhale Madoff replies, “Sure.”

The man who lies to the world is the world’s slave from then on, a controversial conservative hero once observed. In that moment, Madoff sealed not only his fate but cursed his family’s future. But in the film jazz music excitedly dances behind the action and the room is softly lit and golden. Ruth still thinks she’s under the protection of an untouchable financier. How could anything be wrong?

When the word of Madoff’s gargantuan Ponzi scheme shouted its way into the headlines in 2008, one memory that starkly stands out is how small the cameras made the man look. The man’s actual height doesn’t matter; it was the combination of his heavy-lidded eyes and slumped shoulders that made him appear, for all the world, defeated — not at all the monster that he actually is.

Over the course of two hours and nearly 15 minutes “The Wizard of Lies,” debuting Saturday at 8 p.m., depicts Madoff as a bit of both. Outstandingly rendered by DeNiro, the fraudulent stockbroker appears deflated and humbled, somewhat, in the first moments we see him. Sitting quietly, poker-faced, he speaks with New York Times reporter Diana B. Henriques, appearing as herself.

“Wizard of Lies” is based on the book written by Henriques, who was the first journalist to interview Madoff in prison on Aug. 24, 2010, almost two years after the crisis broke. Her re-creation of those interviews in HBO's film provide effective scaffolding for the story of how everything fell apart, brick by brick. In her presence, DeNiro’s Madoff is a figure of complete calm. “He seemed relaxed, unfailingly candid, earnest and trustworthy,” Henriques reports. That isn’t the case for the entirety of the story, or else the film wouldn’t have been able to muster the merciless frankness that the tale deserves and director Barry Levinson starkly reproduces here.

Starting with his arrest in December 2008, “Wizard of Lies” strives, as much as possible, to reveal something about the true nature of a man who deceived his investors, his children and his own wife, to the tune of nearly $65 billion by his firm's initial reports. (As the investigation proceeded, the amount deemed missing and recoverable hovered closer to $18 billion.)

However, the HBO film forgoes explanation of how Madoff built his empire and refrains from highlighting the list of household names he defrauded, although the script mentions Holocaust survivor Elie Wiesel several times. (Among the list of famous clients he grifted were Kevin Bacon and Kyra Sedgwick, Steven Spielberg, John Malkovich, Eliot Spitzer and Zsa Zsa Gabor.) This means that viewers seeking a concrete understanding as to how a man like this comes to be will not come away with additional insight. For that a person may choose to dig up ABC’s inferior 2016 miniseries “Madoff,” which starred Richard Dreyfuss as Madoff and cast Blythe Danner as Ruth.

Instead, “Wizard of Lies” leans heavily on its performances to create a tapestry in muted tones of what happens to an empire built on sand when the tide comes in. Its screenplay, co-written by Sam Levinson, John Burnham Schwartz and Samuel Baum, emulates Chuck Close-style portraiture, illustrating Madoff first as a man created in the image of his fans and enablers and, after his ignominious tumble, the destroyer of thousands of lives. One montage strips a series of stills as Henriques relates how a smattering of several of his victims heard the news that their wealth had suddenly vanished. As the story pile builds, the images speed up and the shot widens to show face after face arranged in a pointillist simulacrum, forming into Madoff’s inscrutable visage.

Madoff went on to plead guilty to 11 felony counts in March 2009, and was sentenced to 150 years in prison.

Through DeNiro’s quiet and even-tempered portrayal, and Levinson’s emphasis on tight shots and wordless spaces, Levinson trains the film’s focus on the intimacy of Madoff’s betrayal. Scene after scene bristles with close-ups of the people closest to Madoff as they struggle to respond truthfully to questions for which they have no solid answers; they claim that they were as much in the dark as everyone else.

In those scenes, “Wizard of Lies” expresses the cavernous pathos of the Madoff family’s tragedy with cool, immaculate precision. DeNiro’s Madoff faces Henriques, his inquisitor, with the same expressionless mug he shows Ruth, his wife of five decades, as she sits across the table from him in the visiting area at the prison.

One would almost think Madoff penitent in those moments if not for the movie’s flashbacks to the fatter times, pre-economic meltdown. In those scenes, whether at luxurious beachfront parties or family dinners, DeNiro’s Madoff belittles his family and denigrates those serving him. Not even his 8-year-old daughter is spared his wrath when she asks about the 2008 stock market crash that precipitated his undoing.

What “Wizard of Lies” lacks in terms of a broader historical span is compensated for by telling Madoff’s tale as a classical tragedy about hubris and human cost — only in this case we watch as the villain’s wife and children take the brunt of the toll. DeNiro and Pfeiffer are as formidable in their roles as one would expect them to be, and the easy conversational flair with which Henriques squares off with DeNiro is incredible.

To embody the chain-smoking DiPascali, Azaria slathers himself in a rich broth of porcine misogyny and desperation; the result is a character that’s simultaneously barely tolerable and highly watchable. Quietly flitting around the edges, Alessandro Nivola, who plays Mark Madoff, and Nathan Darrow, as Andrew Madoff, hold their own in playing a pair of men forced to live in their father’s shadow before ultimately being consumed by it. Madoff’s victims were numerous, but witnessing the ruin he brought upon his own family feels crushing as opposed to cathartic. Admittedly that approach may leave some viewers cold, and the writers tacitly acknowledge this.

“It’s hard to tell our story when there are so many other stories,” Andy tells a group of students near the end of his life. “. . . There are just three of us. There are thousands of victims.”

Once the flames died down and the federal government liquidated all of the family’s assets, Ruth and her relatives were cleaned out. His wife and children were lower than pariahs; the scandal ground down oldest son Mark to nothing, and he committed suicide in December 2010. His brother Andrew died of cancer in 2014.

Even at the end of the story, DeNiro’s Madoff remains image-conscious, angry at the brush with which the media has painted him. He takes issue with one report likening him to a sociopath, but never does he raise his voice or betray a hint of rage in his features.

As Henriques points out early on, “That is his talent and his curse.”