Republicans have lost the war on gay marriage: Support for same-sex unions at all-time high 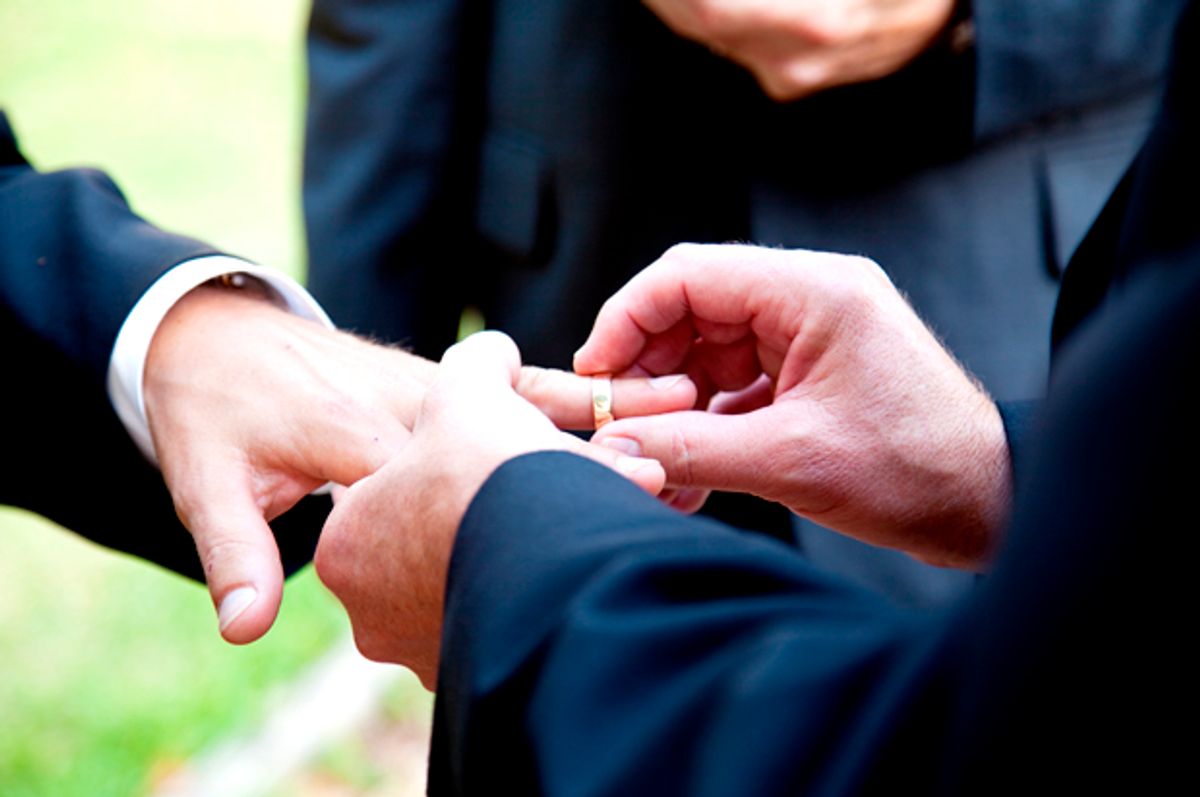 A new poll from Gallup shows record support for same-sex marriage. Survey results released Monday show that 64 percent of Americans are in favor of the Supreme Court’s 2015 decision to legalize marriage equality — up from 61 percent last year. In addition, 72 percent of respondents told Gallup that consenting relations between individuals should not be banned by law. Just 32 percent of Americans agreed with those sentiments three decades ago.

Interestingly, Gallup notes that the historic highs register across the board. Nearly half of Republicans (47 percent) are in favor of the freedom to marry, while a majority of Protestants (55 percent) support legal recognition for same-sex unions for the first time since the polling agency began tracking the issue.

These survey results are great news for the LGBT community, which has worked for decades to show that our relationships and families deserve the same rights as everyone else’s. Twenty years ago, just 16 percent of Republicans believed that same-sex couples should be allowed to marry. In the wake of the Obergefell v. Hodges ruling, that same political party has attempted to undermine those newly won protections with legislation that contradicts the Supreme Court’s decision, but Gallup’s findings show the GOP isn’t winning back hearts and minds. Anti-LGBT conservatives are even losing their own party.

2017 has been a nonstop assault on LGBT rights across the U.S. The American Civil Liberties Union has estimated that over 200 pieces of discriminatory legislation targeting queer and trans people will be introduced at the state level this year, and a great many of those bills have gay marriage in their crosshairs. Having lost the courts, Republican legislators are trying to win the war by ensuring that same-sex unions are relegated to a second-class status.

The most obvious attempt to do so was a North Carolina bill which sought to ban marriage equality in the state. Known as the “Uphold Historical Marriage Act,” House Bill 780 declared the Obergefell ruling “null and void in the State of North Carolina.” Sponsored by Republican House Reps. Larry Pittman, Michael Speciale, and Carl Ford, the legislation stipulates that the state’s definition of marriage should supercede the national one. In 2012, 61 percent of N.C. voters cast a ballot in favor of a Constitutional Amendment limiting marriage to one man and one woman.

That bill, like many such efforts, failed. It was tabled in April.

These attacks, despite their varying effectiveness, have remained consistent throughout this year’s legislative session. Tennessee got its own bill threatening to block same-sex marriage in the state — called the “Natural Marriage Defense Act” — but Republican legislators also introduced a bill that would prevent same-sex couples who conceive through artificial insemination from having both parties listed on the child’s birth certificate. Neither of those bills have become law, but one bill did sneak through: Senate Bill 1085 requires that words like “mother” and “father” be treated with their “natural and ordinary meaning.”

While Texas considers a bill that would allow same-sex couples to be turned away from adoption agencies, a new law from a state thirsty for an anti-LGBT bill would allow for Kim Davis-style discrimination. Senate Bill 522, which got a thumbs up from the House State Affairs Committee on Tuesday, would allow county clerks to refuse to issue marriage licenses based on their “sincerely held religious belief” that marriage is between a man and a woman.

These legislatures have attempted to use same-sex unions as wedge issues to drum up support for the Republican party. By playing to what they believe their base wants and taking LGBT down a peg, it helps state representatives win their reelection races, sure to be contentious in 2018. Record numbers of people of color and women are running in next year’s midterms.

Although a handful of states have passed anti-LGBT laws in 2017, there’s a good reason why more haven’t joined them: These appeals to Republican voters have fallen flat. Texas’ myriad attempts at discrimination — which include bills targeting transgender bathroom usage and trans athletes — have drummed up more opposition than they have support. The Texas Association of Business has warned that taking action against the LGBT community could lead to an $8.5 billion boycott of the state. That exact number has been questioned, but given the economic fallout after North Carolina’s troubled anti-LGBT bill, the impact wouldn’t be good.

Discriminating against LGBT people, especially same-sex couples, is as costly as it is unpopular. A poll from the Public Religion Research Institute released earlier this year showed that of all of the faith groups polled, only one supported the right of individuals to discriminate against LGBT married couples based on their sincerely held religious beliefs. White evangelical protestants were in favor of religiously-based refusals by a margin of 50 to 42. Over three-fifths of all respondents believed that LGBT and heterosexual couples should be treated equally.

Instead of driving a stake into the heart of the marriage equality movement, polling indicates that the intensifying GOP opposition only helps the cause. According to Gallup, the support for same-sex marriage has shot up in the past year by three points — a pretty significant increase.

There will continue to be efforts to strike at LGBT people’s rights. Republicans will continue to push an agenda that makes queer and transgender people into scapegoats, whether it’s a Congressional bill that would allow LGBT workers to be fired or the slow rollback of federal protections under the new administration. The GOP may score a handful of victories, including the handful of anti-LGBT adoption bills enacted this year, but the surveys show that the forces of inclusion are winning.