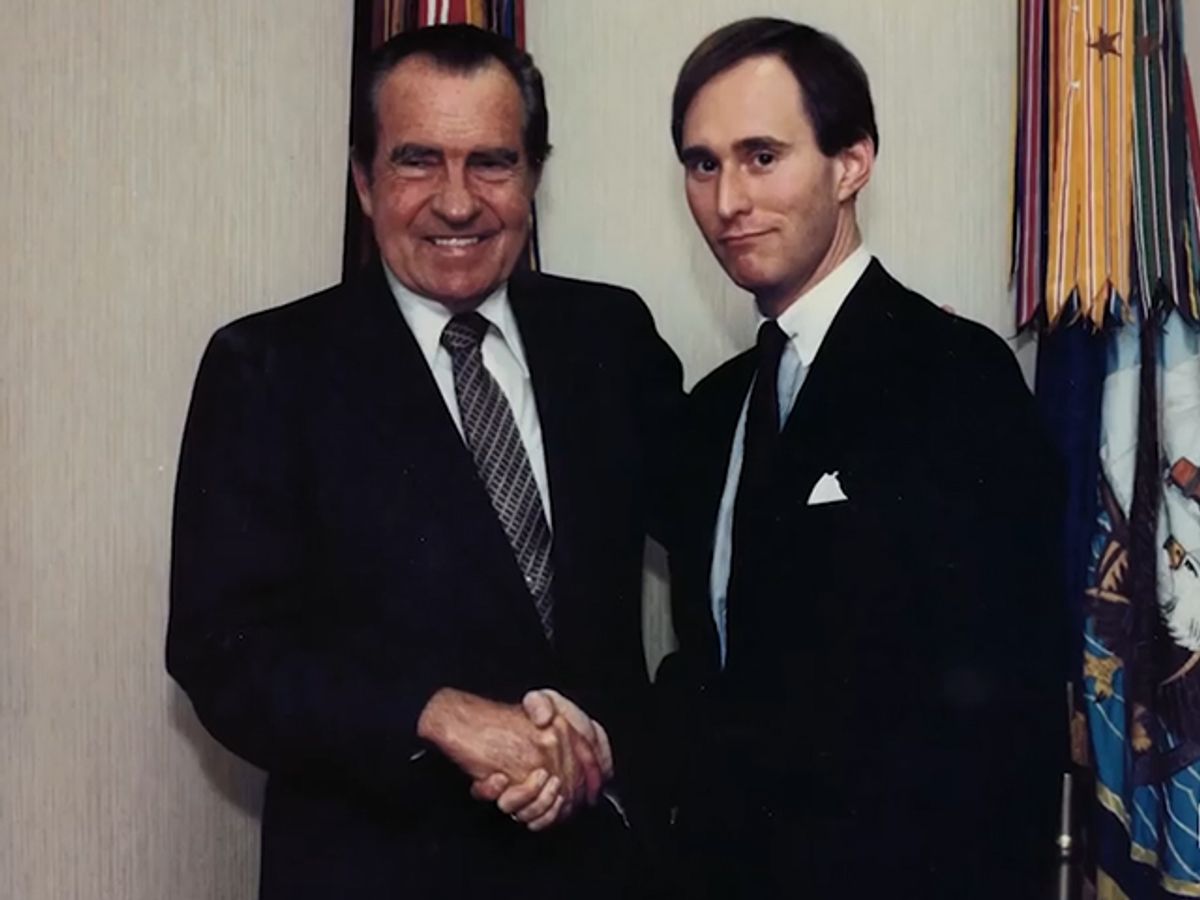 Is it a fair or overblown comparison to contrast the propensity for political scandal that Presidents Richard Nixon and Donald Trump acquired, as Sen. John McCain has pointed out? Well, when attempting to make such a comparison, don't forget to include a key operative connecting these administrations comfortably separated by decades. Dylan Bank and Daniel DiMauro, makers of a new Netflix documentary, "Get Me Roger Stone," joined the set of "Salon Talks" to fill in some of the details.

Roger Stone, a former Nixon official who sports a tattoo of the disgraced former president, was an early supporter of Trump's presidential quest. Although Stone, who has been involved in Republican politics for 40 years, might even describe himself as a "dirty trickster," he also likes to refer to himself as “whistleblower on lobbyists and the corruption in Washington,” DiMauro said.

Nonetheless Stone was expanding his lobbying firm of firm Black, Manafort and Stone in the early 1980s, DiMauro said. “He definitely helped expand the swamp," DiMauro added. "Their firm was the first firm to combine consulting and lobbying. So they would elect people and then immediately turn around and charge access to their administrations.”

Bank pointed out that Stone's colleague Paul Manafort, who eventually became Trump’s presidential campaign manager for a spell in 2016, dipped his toes several years ago inside the former Soviet Union.

“A lot of them from Black, Manafort and Stone, especially Paul Manafort, Roger included, went over to the new democracies and sold their wares over there, and Roger likes to brag that he is the founder of the campaign yard sign in the Ukraine,” Bank said. “Paul Manafort really invested in it. He really stayed there. He was in many ways the shadow leader behind the Ukraine before it fell, and the whole Crimea [annexation] thing happened. So their connections go very, very deep,” Bank added.

“Now, how much that directly connects to Donald Trump himself remains to be seen," Bank said. "But certainly one thing that Roger brought with him and his Nixon tattoo was the Nixonian tactics of 'say what you got to do, do what you got to do, say what the crowd is going to react to' to get to where you have to be to get the votes," Bank said. "Get those votes. And so to end up with the comparison now between Nixon and Trump and Roger and with Russia all tied in together, it’s certainly a natural conclusion for people to make.”