Sex with God as a donkey: What constitutes blasphemy today?

What's at stake when ancient ideas of heresy collide with the modern notion of free speech? 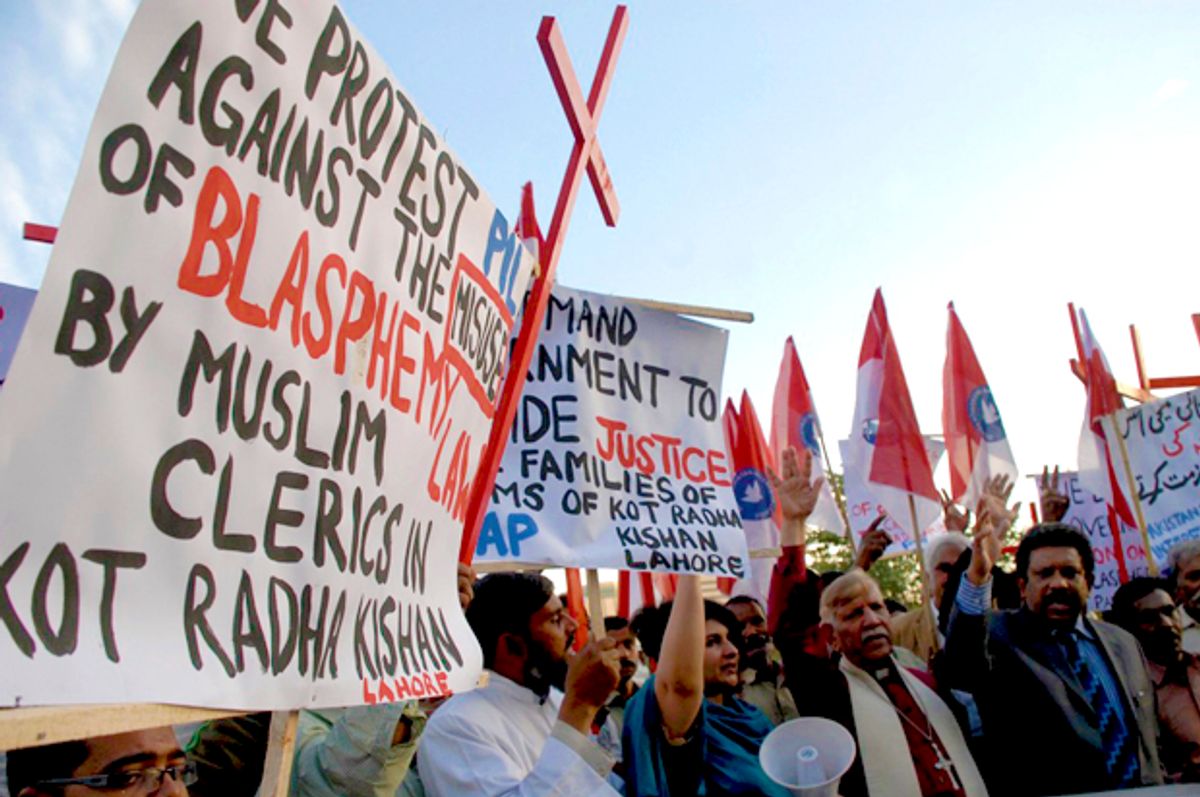 In 1966, Dutch writer Gerard Kornelis van het Reve was called before a judge in Amsterdam for violating his country’s anti-blasphemy law. Although it would take decades for the Netherlands to decriminalize blasphemy, the outcome of Reve’s case — known as the "Donkey Trial" — rendered the law virtually obsolete.

One of the first openly gay writers in the Netherlands, Reve was born to a communist, atheist family, and was known for writing about sexual relationships between men in a way that was ironic and accessible for the masses at the time. What got him into legal trouble was a piece he’d published in the debut issue of "Dialoog, tijdschrift voor homofilie en maatschappij"("Dialogue, a Magazine for Homosexuality and Society"), called "Brief aan mijn bank" ("Letter to My Bank").

One passage in particular was considered particularly problematic:

If God again catches himself in the Living Substance, He will return as a donkey, only able to formulate a few syllables, misunderstood and maligned and whipped, but I will understand Him and go to bed with Him immediately, but I put bandages around his little hooves to ensure that I don’t get too many scrapes when he flounders in the ejaculation.

Reve was charged with violating what was known as Article 147. Added to the Dutch criminal code in 1932, the law made it illegal for anyone to publicly, orally, in writing or depiction, offend religious feelings by "scornful" blasphemy. Doing so was punishable by fine or prison sentence. The law was established after a Communist newspaper ridiculed the Christian religion in several articles and cartoons and the Communist party proposed removing Christmas from the list of national holidays.

In his first trial, for which he hired a defense lawyer, Reve was convicted. On appeal, he decided to defend himself.

During his plea to the court, he explained his concept of God, which he believed to be in keeping with the biblical symbol of God as a lamb. “God is the most hidden, most defenseless, most perfect and imperishable in us,” he said, “and the sweetest, most blameless creature I know is, besides the elephant, the donkey.”

Reve, who converted to Catholicism the same year he stood trial, convinced the court his words were not said with scorn but were an expression of his notion of God, and therefore not blasphemous according to the language of the law. “When in His Love God is sacrificing Himself to me,” he said during his defense, “He is doing so in a way that symbolizes the most extreme, most complete and most tender submission: He is giving Himself to me in sexual surrender, choosing the kind of intimacy which, to me, is superior to any other intimacy and which surpasses all understanding: He allows me to posses His secret entrance.”

The controversial passage was near to the writer’s heart, and he believed, as he wrote in his book “Nader Tot U” ("Nearer to Thee") that God himself would be pleased by it: “And God Himself would come along with me in the shape of a year-old, mouse-gray donkey,” he wrote, “and stand by the door and say, ‘Gerard, that book of yours: Do you know that I cried with some parts?’” Reve was acquitted two years after the initial trial began, and was the last person to ever stand before the court in the Netherlands on blasphemy charges.

The Dutch law was discarded in 2013. However, elsewhere in Europe — including in Austria, Denmark, Finland, Greece, Italy and the Republic of Ireland — anti-blasphemy laws are still firmly in place (though seldom enforced).

Still, last month saw English comedian, actor and writer Stephen Fry investigated for blasphemy in the Republic of Ireland — the only Western country to introduce anti-blasphemy law in the 21st century (the law passed in 2009 and carries a fine of up to 25,000 Euro).

Fry, appearing on a television show, was asked what he might ask God at the gates of heaven, and responded that he would ask how God dare “create a world in which there is such misery? . . . Why should I respect a capricious, mean-minded, stupid god who creates a world which is so full of injustice and pain?”

An anonymous viewer filed a complaint, requiring police to look into the matter. In the end, lawmakers determined that one offended audience member was not enough to constitute a blasphemy charge. The investigation was dropped.

The Fry incident sparked renewed criticism of Ireland's anti-blasphemy law and has actually persuaded New Zealand to get rid of its own similar legislation. Anglican Archbishop Philip Richardson of the New Zealand Diocese of Waikato and Taranaki told the press, “God’s bigger than needing to be defended by the Crimes Act.”

In the West, anti-blasphemy laws tend to be seen as being in direct conflict with the freedom of speech. In the Netherlands, the notoriously anti-Islam politician Geert Wilders was put on trial in 2011 for his blatant criticism of the religion. In June of that year, a Dutch court ruled that Wilders was within his rights, even if his comments offended many Muslims. Wilders responded, saying the verdict was “not only an acquittal for me, but a victory for freedom of expression in the Netherlands.” The Dutch anti-blasphemy law has since been repealed.

There is no federal blasphemy law in the United States, but according to Pew Research Center analysis, several states do have such laws even though they are rendered legally unenforceable by the First Amendment of the Constitution.

While anti-blasphemy laws in most of the West are primarily legal anachronisms, in other areas of the world blasphemy is punishable by strict penalties, including death.

According to the Pew study, as of 2014, “about a quarter of the world’s countries and territories (26 percent) had anti-blasphemy laws or policies, and that more than one in 10 (13 percent) nations had laws or policies penalizing apostasy." The report continued, "The legal punishments for such transgressions vary from fines to death.”

For these and other reasons, many believe even dead-letter anti-blasphemy laws should be repealed. “It is time for the Dutch government to take a leading role in the worldwide abolishment of blasphemy legislation,” writes Mirjam van Schaik on the Leiden University Law Blog, ". . . particularly nowadays, it is vital that we send out a strong global signal to the world to defend the freedom of speech and thought.”

At the same time, a global rise in asylum seekers, the refugee crisis and immigration has caused some governments to institute stricter laws in order to protect specific groups. Canada, for example, passed new legislation this year designed to protect Muslims from hate speech. Many critics are calling it an anti-blasphemy law.

Gerard Reve, meanwhile, is now considered one of the Netherlands’ most important writers. His works are even required reading in many high schools. After the "Donkey Trial" he went on to serve as a literary advisor to a new Catholic Bible translation in 1975. Up until his death in 2006, he never denied his devotion to God, nor his right to his own expression of worship.