I hate myself for loving the Dead movie 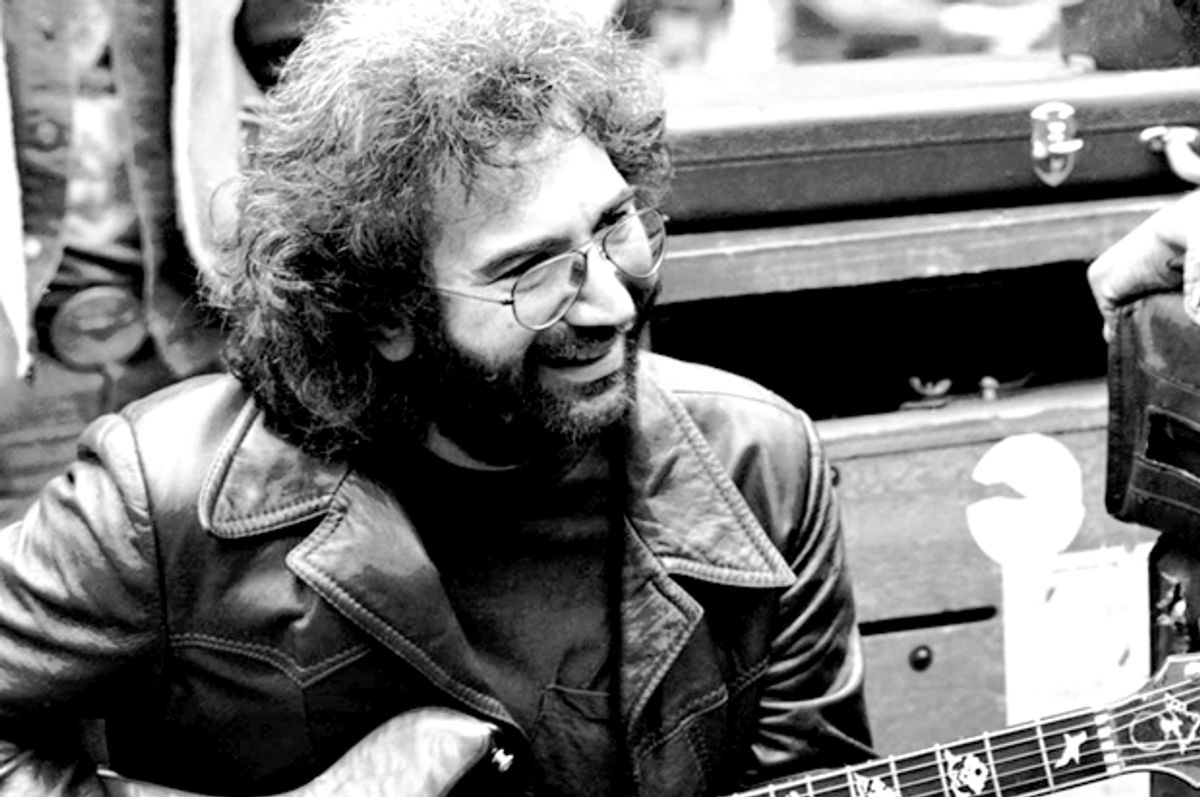 Here’s an annoying meta-textual confession — the kind where the author of an article forcefully inserts himself (or herself, but in this case: himself) right up top, in an open violation of essayistic decorum that borders on the indulgently diaristic — I initially set out here to rag on the Grateful Dead.

Or rather, I set out to entertain the idea of ragging on them, of using the band’s new four-hour (!) documentary “Long Strange Trip” to make a case for the venerable jam band as a strictly Boomer concern, fated to fade out like so many sun-bleached tie-dye shirts. I wanted to argue, persuasively, that the Dead was dead. I mean, it just sounds so enticing: “Is The Dead dead?”

But I couldn’t do it.

Going into “Long Strange Trip,” I counted myself as a fan of the band, if not a full-blown Deadhead. Their 1972 triple-live album “Europe ’72” ranks among my favorite records; I own and frequently wear a well-pilled (and poorly stitched-up) Steal Your Face t-shirt; and while I’m a bit too young to have ever caught the band live, I’ve seen post-Dead spin-offs like Ratdog and Phil Lesh & Friends multiple times. I’ve read bassist Lesh’s autobiography “Searching for the Sound: My Life with the Grateful Dead,” and skimmed drummer Bill Kreutzmann’s “Deal: My Three Decades of Drumming, Dreams and Drugs with the Grateful Dead.” I even dutifully tried and failed to secure tickets to the band’s 2015 50th anniversary shows, which saw Phish frontman Trey Anastasio stepping in for dearly departed Dead singer/guitarist/countercultural yogi Jerry Garcia. I’ve defended the Dead’s honor and their status one of the greatest American bands (and certainly the most American band) to uninterested friends. But among my generation, or even just my broader peer group, I always assumed myself an exception. (A solipsistic bit of self-flattery, I know, I know.)

Efforts to canvass that same friend group proved otherwise. Among a coterie of veteran hardcore punks, metalheads, indie rock snobs, classic rock fans and people who listen to “everything,” there were plenty of not-so-secret Deadheads creeping out of the woodwork. And why not?

The Grateful Dead was one of the last “big tent” rock bands. At the peak of their fame in the late 1980s and early ’90s, their concerts attracted roving bands of hippies, Hell’s Angels, Trust Fund Trotskys, buttoned-down liberals (appears in “Long Strange Trip,” interviewed against backdrop of fine woods and leathers that reek of real-deal political influence), Top-40 radio rockers drawn in by late-period breakout single “Touch of Grey” and even armies of “spinners” — people who show up and spend the entirety of concerts whirligigging to the music, caught in a state of near-religious ecstasy like hairy human Spirographs. As one super-fan puts it in the new doc, “Grateful Dead shows were like a mandala,” that is, a colorful microcosm of the universe itself, representing some wonky balance of American identities.

What’s even more impressive is that the Grateful Dead managed to remain a top concert draw for decades without ever fully exploding into the mainstream. In “No Simple Highway: A Cultural History of the Grateful Dead,” Peter Richardson writes “Although they offered a fully formed alternative to America’s sober, God-fearing, and profit-maximizing ways, a large part of their appeal arose not from their resistance to American culture, but rather from their uncanny ability to tap its inexhaustible utopian energies.” Even when they were selling out stadiums on massive, cross-continent tours, they somehow remained a subculture, offering an alternative to (or just a brief escape from) Reagan-era America.

Still, to the curious or Dead-ambivalent, such evaluations no doubt feel highfalutin, or even obnoxious. Like: spinners? inexhaustible utopian energies? Mandalas? This is precisely the sort of alienating, hippy-dippy, “Hey man . . .” jargon that makes getting into the Dead seem so alienating — and worse, just straight-up lame.

“Long Strange Trip” opens with a savvy gambit that sums up this paradox of Deadheadery. “It’s a real challenge,” says long-time band biographer and media liaison Dennis McNally, “to love the Grateful Dead if you’re not already a Deadhead.” It’s a problem that afflicts most hardcore fandoms. (I mean, not a real problem like starvation or income inequality, but at the very least it constitutes a stumbling block.) How does one get into a thing that runs so deep, and whose fans are so rabid, slavish and know-it-all knowledgable? It’s like deciding one to day to just cultivate an interest in anime or fine wine. Where does one even begin?

Director Amir Bar-Lev’s “Long Strange Trip” may not offer the easiest entry point. A four-hour documentary seems like a dare — or a joke — even to veteran Deadheads.

This is not to disparage the film itself, which is superb. Like Ezra Edelman’s 2016, Oscar-winning doc “O.J.: Made In America,” Bar-Lev’s film uses its marathon runtime to create a genuine epic of the American experience. Beyond making the case for the band’s music, “Long Strange Trip” is a look at the abounding ecstasy of music itself, and at the American counter-culture of the ’60s and how that counterculture slowly shifted to become cannibalizing.

Over the course of the film’s four hours (and one minute), Bar-Lev explores how the the Dead’s promise of utopia — whether by music, drugs, community, or some interaction of the three — had been sold out and calcified into a sleazy empire of merch, of dancing-bear bumper stickers and skull-and-roses tie-dye tops. The band became a “machine,” a “weight,” which effectively indentured the band, and Garcia especially. As a nuanced look at how a band shifts into a brand, it rivals even Joe Berlinger and Bruce Sinofsky’s 2004 Metallica doc “Some Kind of Monster.” There is so much going on in “Long Strange Trip” that its scope, to say nothing of the runtime, proves daunting. (Though the poetry of making a Grateful Dead doc that is as long and captivating and exploratory as a Grateful Dead concert is by no means lost on me.)

A more accessible, though perhaps no less intimidating, entryway is the band’s massive new box set “May 1977: Get Shown the Light,” a 10-disc CD box set (or 21 gigabyte lossless FLAC file) featuring four complete Dead shows from May 1977, including the May 8, 1977, performance at Cornell University in Ithaca, New York, which is considered by many serious Deadheads and hard-core tape traders as the best show the band ever played. The box set set showcases one of American music’s most unruly bands at their most approachable. Caught between the acid-testing blues-rock freakouts of the group’s psychedelic ’60s output and the formless, spacey drum circle jamming of the ’80s period (which this fan, personally, has little use for), these shows are the perfectly proportioned gateway drug for anyone leery of the Grateful Dead, or on the idea of free-form instrumental “jamming.”

Given that these shows have long been widely available in underground tape-trading networks (and their 21st century online equivalents), the new, remastered release suggests — contra my initial, click-baiting hypothesis — that the Dead are more than just a concern for aging hippies and Boomers holding fast to some long-faded notion of countercultural authenticity. See also: last year’s massive “Day of the Dead”  charity compilation, which saw alternative/indie mainstays like The National, Wilco and The War on Drugs working through the Dead’s catalogue.

It’d be a stretch to say the Grateful Dead are somehow relevant again. It’s more that their total irrelevance makes them more approachable. Now that the Grateful Dead are (more or less) an inactive band, a relic of era(s) bygone, it may be even easier for newcomers to appreciate their music. The more grating subcultural clichés have faded away, with those roving bands of cartoon stoners dispersing to trail the Dead’s lesser jam-band progeny around the summer festival circuit. But interest in the band, and the music itself, seems to continually renew itself. The long shadow of their legacy, and the daunting breadth of their catalogue and fan culture, only serve this renewal. As much now as ever before, the Grateful Dead are something to become totally, consumingly obsessed with.

Author Chuck Klosterman had a bit in his “Killing Yourself to Live” about how there’ll always be a “that guy” wearing a trademarked Led Zeppelin Swan Song t-shirt. The same feels true — truer, even — of the Grateful Dead. Even when the tours and spin-off projects and epic marathon docs recede into history, there’ll always be new fans slipping into their first Steal Your Face t-shirt, scouring thousands of hours of recordings for the perfect version of “St. Stephen” or “Althea,” searching for a sound.