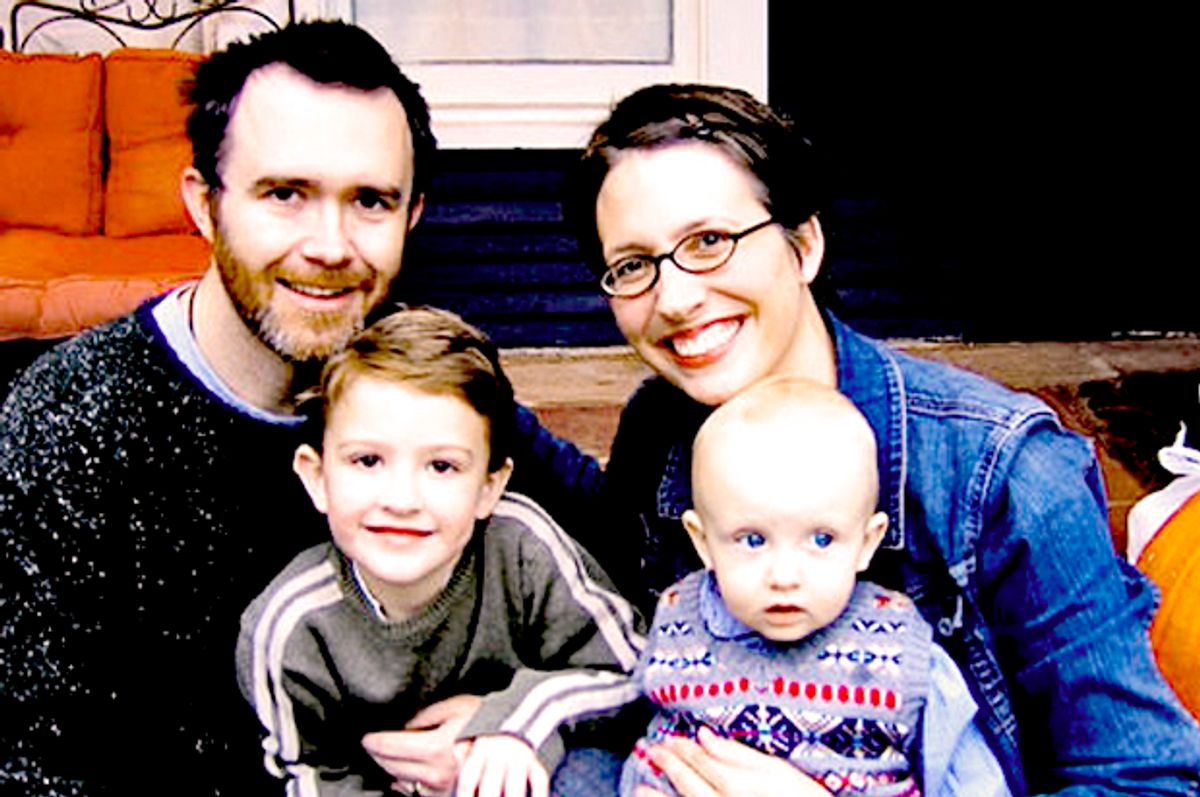 Journalist Rod Dreher has been writing for years about his personal and religious journey in his blog for the American Conservative website. In his new book, "The Benedict Option: A Strategy for Christians in a Post-Christian Nation" -- which New York Times columnist David Brooks calls "already the most discussed and most important religious book of the decade" -- Dreher reports on the lessons he’s learned in searching for both a spiritual and a real world-community. In a profile entitled “The Seeker” in the May 1 issue of the New Yorker, Joshua Rothman travels with Dreher to visit different religious communities that are trying to balance living the modern world while resisting its rampart individualism, moral relativism and rootlessness.

But at the center of Dreher’s quest and his quandary is his hometown of St. Francisville, Louisiana -- population 1,716. In telling his story of family tragedy and the virtues of compassion and charity, Dreher unwittingly exposes our nation’s outrageous cruelty and callousness. It is an irony that escapes Dreher as well as Rothman, but one that elucidates the underbelly of American culture in the era of Donald Trump.

Dreher, now 50, left St. Francisville to attend college at Louisiana State University, then moved on to Washington, New York, Miami, Dallas and Philadelphia in the course of his career as a journalist for conservative publications. He returned to St. Francisville occasionally to visit his family, including his sister, Ruthie, who never left. She married, raised a family, and worked as a teacher. Then tragedy struck. As Rothman explains:

On Mardi Gras, 2010, Ruthie was diagnosed with Stage 4 lung cancer. She was forty years old and had three daughters. Dreher began visiting St. Francisville as often as he could, and discovered that she was a pillar of the community that he had left behind. She gave Christmas gifts to the poorest neighbors and mentored the most difficult kids in school; she was a joyful presence at bonfires, creek parties, and crawfish boils. Though exhausted by chemotherapy, she drew up a list of friends in need and prayed for them every night. She made a new rule for her family: "We will not be angry at God." When friends threw her a benefit concert, a thousand people came. To Dreher, a devout Christian, she seemed beatific in her suffering.

During Ruthie’s 19-month battle with cancer, the town rallied around her and her family as her health deteriorated. Friends and neighbors cooked meals, helped care for her three daughters and organized the concert (which netted $43,000), two chicken-dinner fundraisers (raising another $12,000) and other events to help pay for her medical bills. When Ruthie died in September 2011, more than 1,000 people attended her funeral.

“The outpouring — an eruption, really — of goodness and charity from the people of our town has been quite simply stunning,” Dreher wrote on his blog at the time. “The acts of aid and comfort have been ceaseless, often reducing our parents to tears of shock and awe.”

Ruthie’s husband Mike Leming, an Iraq war veteran and a fireman, told Dreher that his friends helped him get through the tragedy. “We’re leaning, but we’re leaning on each other,” he said.

After experiencing the warmth of the tight-knit community, Dreher, then 44, decided to move with his wife and children from Philadelphia back to St. Francisville.

“I thought, ‘Even with all the sadness, there’s no place else in the world I’d rather be,’” he wrote.

“His plan,” Rothman reports in the New Yorker article, “was to fall back in love with his family and with God at the same time.”

It didn’t quite work out the way Dreher had hoped.

While living in St. Francisville, he reconciled with his father, from whom he had been estranged for many years. But as hard as he tried, he couldn’t reconcile with St. Francisville. He had been away too long and felt like an outsider. Despite his quest for community, he was a somewhat rootless intellectual. Despite his strong faith, he didn’t share the religious views of most St. Francisville residents, who were largely Catholic, Methodist or Pentecostal. Dreher had been raised Methodist before converting to Catholicism at age 26.  In 2006 he left the Catholic Church after reporting about its sexual abuse scandal. He and his wife converted to Eastern Orthodox Christianity and, with several other families, opened their own Orthodox mission church near St. Francisville. But within a few years the mission lost its priest and some founding members began moving away. Dreher's father died in 2015, and the following summer he and his family moved away too, to Baton Rouge, to be near an Orthodox church.

Despite his own departure from the town, Dreher continues to view St. Francisville with a sense of romantic awe. He uses the town as a metaphor for the virtues of communitarian conservatism, whose strengths he attributes to shared values, religious devotion, voluntarism and small-town life.

Dreher chronicled his return to St. Francisville in his 2014 book, "The Little Way of Ruthie Leming: A Southern Girl, a Small Town, and the Secret of a Good Life," which was published before he decided to move to Baton Rouge.

In "The Benedict Option," Dreher draws lessons from that experience and from his research on ancient Christianity and modern efforts to build an authentic  spiritual community. He calls on American Christians to prepare for the coming Dark Age by resisting modern culture and embracing an ancient religious way of life, rooted in Scripture, prayer, self-sacrifice on behalf of the community and strong ties to friends, neighbors and church -- virtues he believes he discovered in St. Francisville.

"Whenever a hurricane is coming, people see the bad thing coming,” Dreher told a reporter for a Louisiana newspaper, referring to his hometown. “But they pull out the gumbo pot and they start cooking and invite their friends over, and we ride out the storm with each other celebrating.”

Dreher wonders why there aren’t more places like his hometown that forge strong bonds of faith, family and community and that appear to shield people from America’s culture of individualism. He often travels to intentional religious communities around the country, where true believers, wary of modern society, seek to live a life apart as much as possible. Dreher visits these community experiments in self-imposed exile in order to find the spiritual and social formula that offers people the kind of warmth and tight-knit community he was looking for, and says he found but couldn’t fit into in St. Francisville.

The support that Ruthie Leming got from her friends and neighbors is indeed heartwarming. Of course, neighborliness and compassion are not unique to small towns. Nor are acts of cruelty and mean-spiritedness confined to big cities. There is plenty of crime, domestic violence, bigotry and racial and economic tension in rural America.

But Dreher, as well as the New Yorker's Rothman, casually and conveniently pass over the major outrage of Ruthie Leming’s last year on earth — the fact that her community had to hold fundraisers so her family could pay her medical bills.

In no other civilized nation would the Leming family face this double tragedy of debilitating illness and deepening debt. Indeed, people in other well-off countries view America’s lack of universal health care as cruel and barbaric, as indeed it is.

Charity is a good thing. People will always face tragic circumstances where compassion — by individuals and by entire communities — can relieve suffering. Voluntary giving — by the very rich and by ordinary people — can benefit society, especially when it is used to support the extra things that government could but does not fully support, such as museums, symphonies, theater or Little League baseball.

But conservatives romanticize charity (which former President George H.W. Bush called “a thousand points of light”) when they view it as a substitute for government support, and argue that voluntary donations and goodwill gestures can adequately fund K-12 education, feed the hungry, house the homeless, protect communities from hurricanes or pay for medicine, hospitals and doctors’ bills.

For example, during a Republican presidential primary debate in 2011 sponsored by the Tea Party, CNN’s Wolf Blitzer asked Rep. Ron Paul, who is a physician, how society should respond if a healthy 30-year-old man who decided against buying health insurance suddenly goes into a coma and requires intensive care for six months. Paul said that shouldn't be the government's responsibility. "That's what freedom is all about, taking your own risks," Paul said. Blitzer asked him, "Are you saying that society should just let him die?" Before Paul could answer, the audience of conservative Republicans started shouting, "Yeah!" Paul said he hoped that in such a scenario churches might take care of the young man’s medical costs, but that government had no obligation to help.

But, as St. Francisville’s Ruthie and Mike Leming discovered, churches and charity can’t pay the bills. The real community-wide solution to our health care crisis is universal insurance, which can only be achieved if government sets the rules and provides subsidies.

Exorbitant medical bills are the biggest cause of personal bankruptcies and home foreclosures. Prior to 2010, health care industry profits — for drug and insurance companies, in particular — soared, while more and more Americans found themselves without any health insurance at all or (like Ruthie and Mike Leming) with inadequate insurance that didn’t cover their medical bills. As part of their standard business model, insurance companies calculated which Americans were expensive to cover, and refused to provide coverage to those people who had what they euphemistically called “pre-existing conditions.”

In 2010, the nation took a step forward in addressing these problems with a health reform law, the Affordable Care Act (ACA), often called Obamacare, that requires every American to have insurance, provides subsidies for those who can’t afford it and restricts insurance companies from discriminating against sick people. At the time, the insurance companies, big business and the Republican Party spent tens of millions of dollars — in TV ads, campaign contributions and lobbying — to oppose and weaken the bill.

Since then, the Republican Party has repeatedly pledged to dismantle the ACA. Indeed, both Dreher (in his book) and Rothman (in his New Yorker profile) neglect to mention the fact that last November 65 percent of St. Francisville voters supported Donald Trump, who made overturning Obamacare a central plank of his campaign. Nationally, 60 percent of white Catholics and 81 percent of white evangelical or born-again Protestants voted for Trump. In fact, the latter group comprised about 45 percent (28.2 million) of the 63 million voters who supported Trump.

After Trump was elected, along with a Republican-controlled Senate and House, it appeared that their “repeal and replace” goal was inevitable. But by now, too many Americans have come to rely on Obamacare to discard it quite that easily. Indeed, polls reveal that the ACA is more popular than ever, with 61 percent of Americans preferring to “keep and improve” the law compared with only 37 percent who want to “repeal and replace” it.

Even if the ACA had been in place before Ruthie Leming was diagnosed with cancer, it might not have been possible to save her life, but it certainly would have kept the family out of debt.

It is a great reflection on the generosity of the people of St. Francisville -- and an awful reflection on American society -- that at their time of greatest need, Ruthie and Mike Leming had to rely on donations to stave off financial ruin. In what kind of society do we compel teachers and firefighters to rely on charity to help pay their medical bills?