In my father's Iraq, his garden was a sanctuary

For generations, the men in my Kurdish family took refuge in cultivating ornamental blossoms and glorious vines 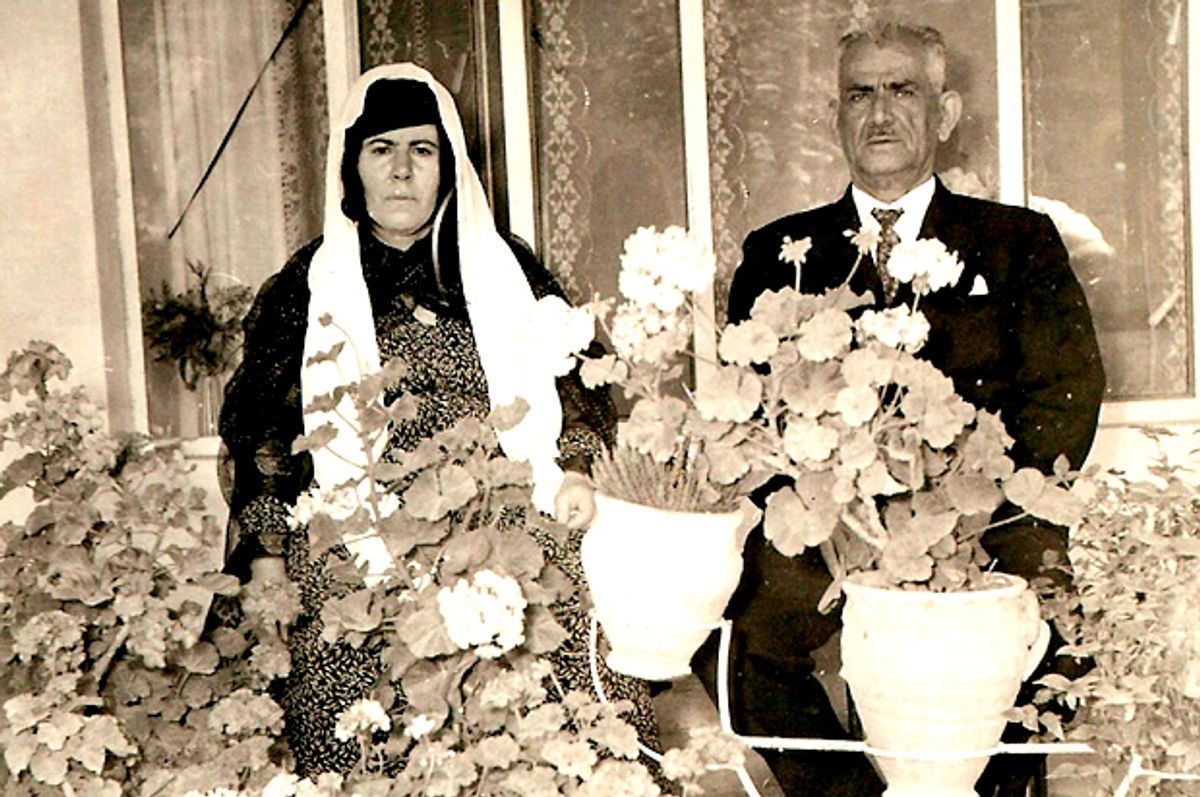 Snapshot memories. Quick glimpses of the past; all that tends to be left of our earliest years. For me, they’re all that remains from my one and only trip to visit my grandparents in Kurdistan. I was 5 years old. My father had just convinced my mother — an American from Minnesota, with light hair and blue eyes and a low threshold for danger — that traveling back to where he was born would be safe. Naturally, my first memory of the trip was the lights on the runway as we debarked the plane in a country we weren’t scheduled to visit, after being forced to make an emergency landing due to a bomb threat. Though I only recall being carried off the plane, I can imagine my mother’s expression.

There are other things I remember. My jelly sandals and how the dust from the dirt roads formed patterns on my skin. The white doves that flew free inside my aunt’s house, fallen eggs cracked upon stairs with no railings. Evening gatherings on rooftops to escape the heat. And air-raid sirens that cut into the night, bringing dinners to a halt. My mother was once yelled at for turning on the lights — Do you want us to be a target? I remember the sink where she stood. She’d just wanted to see the dishes she was washing.

What I don’t remember were the soldiers who arrived at our picnic in the mountains, pointing rifles at us, or how we were only saved because someone in my family knew someone who outranked their highest officer. What I do remember from that day was the creek we ate alongside, the tumbles of white water on rocks, and playing with other children. I also barely remember the restaurant we left only minutes before it exploded, our departure mandated when someone thankfully noticed too many high-ranking officials had arrived; a target if ever there was one. A long table of food is all that’s left in my mind, a crowded room, and a window glossy with the reflection of people whom I now know weren’t long for this earth. Sometimes children are lucky, with what they hold onto. And in my father’s defense, the phone calls back then were heavily monitored by Saddam Hussein’s regime, resulting in the need to speak in code, codes that weren’t always understood. But perhaps more than that, my father had been through much worse. To him it might have been “safe” to finally take his family back home. However, safety, my mother would tell you, is a relative concept.

But given all that, here’s what sticks out more than anything, what almost seems the oddest part of an already unusual trip: There were gardens. Wedged deep in the Middle East, there were beautiful, lush, well-cared-for gardens. I remember my grandparents’ yard, an oasis of roses and morning glories and geraniums, and the baths my little brother and I took outside in an aluminum tub, surrounded by blooms.

The Kurdish area of Iraq has four seasons, with snow and rain and blazing summers. Each spring the narcissus arrive, the Kurdish national flower, usually right in time for the Kurdish New Year. There are oaks, olive trees, gum trees and something my father calls an ironwood tree. The mountains are filled with wildflowers that jump from his memory to mine. When he describes where he’s from, you can imagine chewing the white sap from the gum trees and feel the shade of the towering cypress. To hear him talk about his parents’ garden is to hear memory fill his voice like a radiance. Roses of all colors. Deep pink, almost magenta carnations with a heavy, heady scent. Spills of petunias. Vines of purple passionflowers, “shaped like old-fashioned clocks,” he said. A fence draped in morning glories — I remember that. Standing on a stone at the fence, right up against the explosion of flowers. Not only beautiful, my father told me, but planted there to provide privacy, since during the summer his family slept outside.

For as long as I can remember, my father has gardened. Every yard he’s owned has been transformed, the soil improved, spaces filled with bright blossoms and fruit trees loaded so heavy he’s forced to support the branches. In his yard outside Los Angeles, there are countless citrus, apple, avocado, peach, pomegranate and fig trees. There are black-eyed Susan vines, grapes that hang through slats of the pergola, and sunset-colored alstroemeria that get so tall they need to be roped in for support. Everything grows almost magically, and in unlikely places; figs reaching from the shade of an oak tree, saplings springing from the spot where a half-eaten apple was dropped.

My father has always been known for his garden. But my uncle, his brother, is known for his garden as well. I realize now that they learned this love not from their mother, but from their father. The women back then, where they grew up, were busy with other household duties. It was the men, my father told me, who tended to the gardens. And sure enough, from inside a messy drawer of photographs, he found one from the 1950s: my grandfather standing with more than 20 people — all men — the faded traces of potted plants barely evident in the black-and-white foreground. That, my father explained, was the annual geranium show in his hometown. All the prominent people took part. Teachers and politicians and store-owners. “The person who won became very popular that year,” he said. “Because he had to tell his secret, how he made the plant so beautiful.”

Gatherings often involved the men talking about their gardens, with political talk sandwiched between reports on what was growing, since my father told me that to talk about politics only was simply too much. It was during this time that the Baathist soldiers would go house to house, looking for politically active Kurds or anything incriminating. When this happened, my grandfather would gather all his poetry, history books, and literature — anything written in Kurdish — and race into his garden, to a secret hole he’d dug and lined in plastic. This wasn’t just to preserve the books, which would’ve surely been destroyed, but to save their lives. “He would’ve been executed,” my father said, “just for having anything that could’ve been seen as pro-Kurdish.”

So I understood what he meant when he said that to talk about only politics was too much. In a place and a time where Kurds were being killed for just being Kurds, they needed to talk about their garden, just as they simply needed their garden. There is an order to a garden. You care for it, you love it, you put your time and effort into it, and it will grow and it will stay. In my father’s world, and in his father’s world, there was no such correlation. So the idea of a sanctuary where one could not only escape but also where love — in one of its physically beautiful forms — was under your control, must have been monumental.

Looking back, this love of gardening explains me, the same as if I’d found the genetic trait for dark hair. I inherited it from my father, and he from his. And in turn I understand the urge to escape within plants, though from a much more privileged perspective. If I’m writing and stuck, I wander in my garden. If I’m upset, I sink my hands into the soil, or spend hours pulling grass from between my irises and salvia. I need the visual reminder that if I work hard at something, it will show. I need the correlation. And on my worst days, I need to see that there is a striking, wild beauty in the world. On those days where things seem hopeless, all it takes is one look at the purple stock flower that’s planted itself in a slender crevice between my brick wall and cement patio, and it reminds me that beauty — even in the most unexpected places — will find a way.

Gian Sardar studied creative writing at Loyola Marymount University and is the coauthor of the book "Psychic Junkie." Her debut novel "You Were Here" is out now. She lives in Los Angeles with her husband, son, and insane dog.