From boutique galleries to big-box stores, the design industry is tapping into the latest tech trend 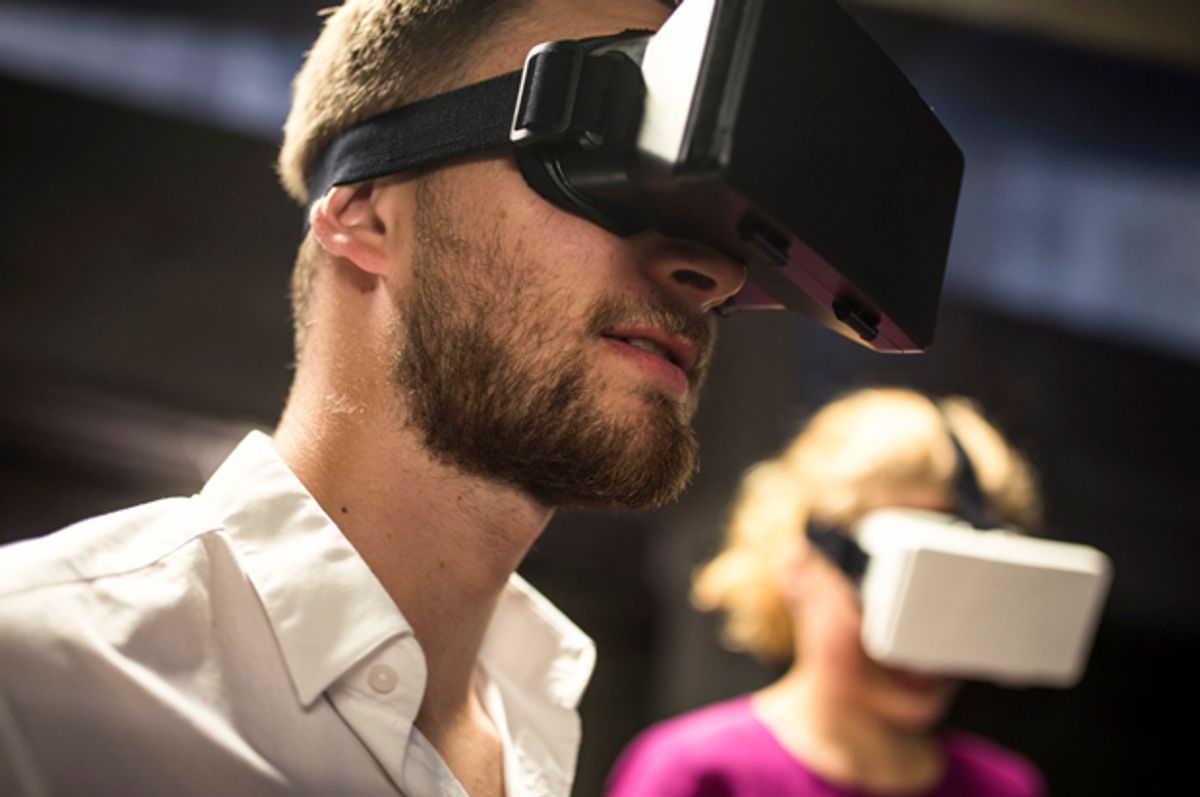 This week, during the NYCxDesign festival, visitors to The Future Perfect can take in a full tour of Casa Perfect, the brand’s beautiful, airy Los Angeles show house, without ever leaving Great Jones Street design gallery.

The exhibition of glasswork by Seattle artist John Hogan takes place both IRL and in virtual reality, enabling visitors to see the pieces carefully lit on a mirrored pedestal in the gallery setting and installed in a classic Mid-Century Modern home nestled in the hills of West Hollywood and through VR headsets scattered throughout the New York space. (You can experience a version of the installation on your browser here.)

Crossovers between the tech and design worlds are cropping up everywhere as designers, galleries and even big-box home-goods retailers look to virtual reality as a way to create spaces that customers can experience in 360 degrees. Even more promising, virtual-reality proponents suggest that the emerging technology may soon become a powerful tool for both architects and designers.

The Future Perfect’s John Hogan show follows a similar recent exhibition at New York’s Jewish Museum, where visitors could interact with the work of designer Pierre Chareau through virtual reality. Inspired, Future Perfect founder David Alhadeff and his team got to work on an experience of their own, purchasing equipment, investigating the presentation possibilities and recruiting a virtual-reality photographer.

According to Alhadeff, the transition is surprisingly scalable for a small companies. “Yes, we had to plan, prepare and execute the concept,” he says. “But I initially thought VR might be completely out of reach, and it turned out to be accessible to us.”

For Alhadeff, virtual reality offers a way to showcase work in an “unexpected context,” while also sharing it beyond the bounds of his physical gallery. To him, it's a valuable tool to help designers and architects communicate with clients. “What can be easier to approve than to see materials, lighting and furniture within the context of the future residential or commercial project?” he says. “I know this is already at play, but it's currently very expensive and time consuming. In the future, I expect this will be increasingly accessible.”

And he’s not alone. Beyond such curated “experiences” as his show at The Future Perfect, many brands have been eager to tap into virtual reality's potential in the design and architecture world. Given that space is the key element in interior design, virtual reality has the potential to render designs in ways that flat images struggle to convey. Online design service Decorilla offers users the chance to preview their proposals in virtual reality, while DIRTT, a custom prefab company, uses ICEreality “mixed reality” to demo design elements overlaid on real-life spaces.

Perhaps the most unexpected (and largest) player in the virtual-reality home-improvement game is Lowe’s. In 2014, the retailer’s Innovation Labs introduced the Lowe’s Holoroom, an interactive design tool that uses in-store Oculus Rift headsets to allow users to virtually design a kitchen or bathroom space using real products from Lowe’s inventory. Customers can rearrange the products in a VR space and then share the results via YouTube’s 360-degree video and the Google Cardboard viewer.

The idea is that these types of experiences will give users confidence in their purchases, but in such strained times for retailers, Lowe’s dramatic virtual-reality kiosks — which take up valuable retail floor space — may prove to be less of a serious design tool than a novel way of bringing customers into stores where they’re more likely to buy something.

One stumbling block to the development of this technology as a retail and design tool — and one reason why in-store VR displays may be where most of us experience the technology in the short term — is the still lackluster consumer interest in virtual reality. According to a recent Nielsen survey reported this week by Business Insider, 53 percent of those polled are “just not interested” in the technology — this despite major pushes by big retailers and tech companies. Until VR catches on at home, it’ll remain up to brands and institutions to create these in-person experiences.

Back at NYCxDesign, VR is making its mark on the annual festival in another way. From May 19 to 22, visitors can visit seven completely imagined interiors as part of a collaboration between Sight Unseen OFFSITE fair and online art seller Twlya. Designed by New York artist and designer Tom Hancocks, the fantastical virtual spaces are pegged to seven interior trends — including color blocking, ’70s chic and ’80s Japan — each showcasing the work of a Twyla artist. For Hancocks, who creates elaborate 3D environments in addition to his designs for the physical world, it was a chance to test the potential of this new technology.

“I'm really not that deeply involved in the VR world just yet . . . but I do know enough to say that this is far more simple than it probably seems, which is a little more exciting to me than a showcase of the most advanced technology would be,” Hancocks says. “Because this is very accessible stuff, and I think that's what the design world needs: more accessible platforms and resources to create and visualize ideas.”