Lt. Gov. Dan Patrick is not above holding the Texas legislature hostage in order to curtail trans bathroom rights 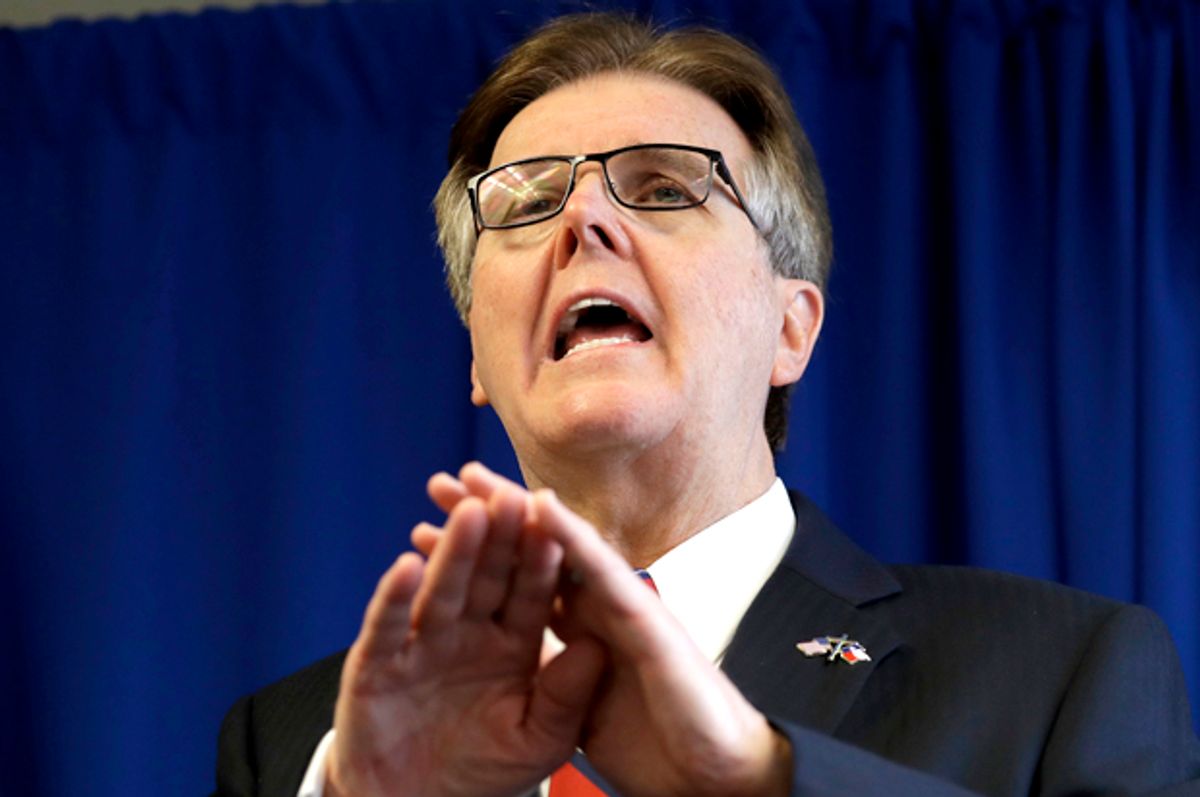 Dan Patrick has a warning for the Texas legislature: Pass a bathroom bill or else.

The lieutenant governor is upset that the state has yet to sign a bill into law that would prevent transgender people from using public restrooms that correspond with their gender identity. Patrick considered the passage of an anti-LGBT bill to be a top priority for this year’s legislative session, but after months of stalled efforts, time is winding down. The legislature wraps on May 31 and will not meet again until 2019. To pressure Republican legislators into beating the deadline, Patrick has threatened to call a “special session” of the legislature “again and again and again" until a bathroom bill passes.

“I want to avoid a special session, but I’m prepared to go into one,” said Patrick, who added, “Voters expected me to be bold to move this legislation forward.”

The ultimatum may have paid off: To avoid going into overtime, the Texas House passed a set of watered-down bathroom policies on Sunday. The legislation, which was attached as a rider to a completely unrelated bill, would force trans students in public schools to use facilities that align with their “biological sex.” It allows these students the option of using a single-occupancy restroom or changing area instead, but advocates warn that this so-called “compromise” singles out trans youth among their peers by marking them as “different.”

State Rep. Senfronia Thompson (D-Houston) compared the law to “separate but equal” segregation under Jim Crow. “Bathrooms divided us then, and it divides us now,” Thompson said on the House floor.

Senate Bill 2078, which was originally intended to be about “multihazard emergency operations plans,” is just the latest attempt to make Texas the next North Carolina. SB 6, another anti-LGBT bill floating the General Assembly, requires that bathroom usage in public schools and buildings operated by the state be determined by the gender listed on one’s birth certificate. This means that if a transgender woman has yet to update her documents, she would be unable to use the women’s bathroom in government buildings, libraries, or public parks.

What’s notable, though, is that SB 2078 is the first of these bills to pass the House. House Speaker Joe Straus repeatedly refused to support HB 2-style legislation, claiming that such a bill is “manufactured and unnecessary” and would harm the state’s economy. The Texas Association of Business warned that signing into law SB 6 — which is one of a number of bathroom bills floating around the legislature — could lead to billions in lost revenue for local companies.

Straus, who approved SB 2078, said that the bill will prevent “the severely negative impact” of previous bills by permitting “schools to continue to handle sensitive issues as they have been handling them.” That is far from the case: The bill would take the issue completely out of administrators’ hands by override pro-LGBT policies passed in local school districts. If a school allows its trans student population to use bathrooms that most closely correspond with their gender identity, those children would be sent back to the wrong restroom.

Given Straus’ support, SB 2078 looks like a sure thing. But even if it fails to become law, Patrick has a nuclear option at his disposal to strongarm the General Assembly into passing another bill just like it.

Only Gov. Greg Abbott has the ability to call a special session, but every year the General Assembly has to reauthorize what’s known as a “sunset safety net bill” to keep important agencies operating. As the Dallas Morning News reports, that includes the “Department of Transportation and boards that license doctors and mental health therapists.” If that bill doesn’t pass before the legislative session ends, it could cause a major shutdown of those services. The legislature would, thus, have no choice but to meet in the special session that Patrick has threatened to use to force a vote on bathroom restrictions.

Abbott has not stated whether he would support a subsequent session to pass an anti-LGBT bill.

LGBT advocates have lambasted Patrick’s actions, referring to his blackmail effort as a “temper tantrum” that would ultimately do massive harm to the state in pursuit of an extreme right-wing agenda. Deanne Cuellar, the ‎Special Projects & Communications Director for Equality Texas, said in a statement that being “transgender in Texas is hard enough without having to face public threats” from the governor’s office. Marty Rouse, National Field Director for the Human Rights Campaign, called the situation “disturbing.”

“Lawmakers should focus on the real issues, and stop using LGBTQ people as pawns to win cheap political points,” Rouse said in an email. “Politicians should focus on jobs and education, not bathrooms and discrimination.”

A legislative cabal to push through an anti-LGBT law is an echo of the passage of HB 2 one year ago. Former North Carolina governor Pat McCrory called a special session of the General Assembly last March after the Charlotte City Council passed a transgender-inclusive ordinance. That policy, which was similar to those passed in more than 200 other cities, allowed for equal access for trans people in all public accommodations; that included housing and the workplace, in addition to bathrooms. HB 2 — which struck down Charlotte’s pro-LGBT ordinance — was introduced, debated, and signed into law all within a single day.

Although McCrory was removed from office in the 2016 election due to voter backlash against the law, HB 2 effectively remains in place. The bill was repealed and replaced with a new version in March, one that retains many of the worst aspects of the prior bill.

Should the lieutenant governor use his political muscle to force through an anti-trans bathroom law, Jenny Pizer of Lambda Legal has a warning for Texas Republicans: LGBT advocates will sue. After the passage of HB 2, groups like Lambda and the American Civil Liberties Union spent a year fighting the bill in court, and those optics have had a powerful impact on North Carolina. With major companies like PayPal and Deutsche Bank pulling out of the Tar Heel State in response, analysts estimate that the backlash cost North Carolina around $80 million a month.

“If Patrick succeeds in forcing discrimination into Texas law, you can bet that Lambda Legal will be on the case before the ink is dry,” said Pizer, the LGBT organization’s Policy Director. “This targeting of LGBT people isn’t just misguided. It’s mean and profoundly harmful.”