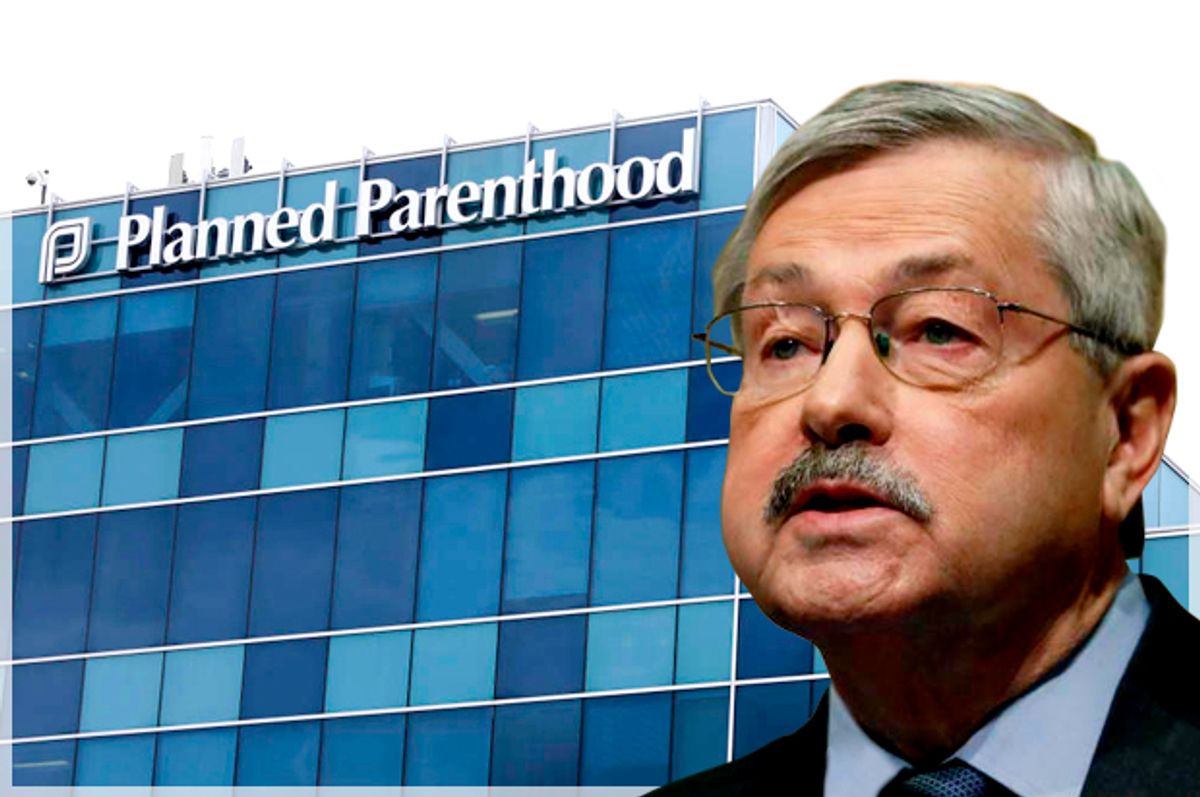 Last summer the anti-choice movement was dealt a serious blow when the Supreme Court ruled that states cannot use medically unnecessary regulations as a pretext to shut down abortion clinics. But that doesn't mean the religious right has given up on its mission to make sure that women who have sex are punished with unwanted pregnancy for it. Under President Donald Trump, anti-choicers are redoubling efforts to destroy Planned Parenthood clinics throughout the country, which not only makes abortion harder to receive but, as an added bonus for the forced-birth brigade, will also cut off many thousands of low-income women from access to contraception.

Earlier this month, Iowa's Republican Gov. Terry Branstad signed an appropriations bill that bars women on Medicaid from receiving any non-abortion services from clinics that offer abortion. The move is forcing four of the state's 12 Planned Parenthood clinics to close.

But with Trump in the White House, Texas is petitioning the government to retrieve its Medicaid money back without having to let Planned Parenthood be part of the roster of providers. Branstad's move suggests that Iowa Republicans are also hopeful that the federal government will simply let states violate long-standing norms that allow women on Medicaid to choose the best provider for them.

"We have seen what happens in states like Texas, and now in Iowa, when politicians attack access to care at Planned Parenthood — it’s devastating, and sometimes deadly, for the women who are left with nowhere to turn for care," said Dr. Raegan McDonald-Mosley, the chief medical officer at Planned Parenthood Federation of America, in a statement.

She isn't exaggerating. As Joseph E. Potter and Kari White of the Texas Evaluation Project explained in a February piece for The Washington Post, "Five years ago, we learned in Texas what can happen when efforts to defund Planned Parenthood are carried out: The network of health-care providers falls apart and women lose access to essential preventive services." In their research, they found that women had trouble receiving contraception and in many cases they were unable to prevent pregnancy.

There's good reason to fear that many women in Iowa are going to lose access to contraception because of these clinic closures. A 2017 report by the Guttmacher Institute found that Planned Parenthood is the main provider of government-subsidized contraception in three out of the four counties that are losing their clinic. In Woodbury County 80 percent of patients receiving family planning services from publicly funded clinics went to Planned Parenthood. In Lee County, it was 92 percent; in Des Moines County, 96 percent.

Anti-choicers have an answer for this, of course: Women can just go somewhere else.

“There are many quality community health centers in Iowa that provide comprehensive health care to women and families across the state," Maggie DeWitte, director of Iowans for Life, said in a statement.

Notice, however, the vague words about "comprehensive health care." DeWitte does not mention gynecological health care, which Planned Parenthood specializes in, and she certainly doesn't mention contraception.

This is not an accident. There are other places that women can go if they have a cold, break their arm or need their blood pressure checked, but receiving gynecological care, which is a medical specialty, or obtaining affordable contraception is another matter entirely. Another report from the Guttmacher Institute, released this month, shows that replacing family planning services isn't so easy. The researchers estimate that other clinics would often have to assume double or triple the number of contraception clients that they currently serve to make up the loss of Planned Parenthood's family planning services. Many of these clinics are already extremely busy, and simply wouldn't be able to do it.

Beyond that, it doesn't take a super sleuth to realize that anti-choice activists don't like birth control any more than they like the abortions that birth control prevents. The Iowans for Life website is stuffed full of anti-contraception propaganda, including claims that intrauterine devices are being forced on unwilling women and assertions that Planned Parenthood "heavily promotes contraceptive methods that may increase women’s risk of contracting STDs." (This claim only makes sense if you assume that women who don't use contraception will instead abstain from sex, an assumption for which there is no real evidence.)

On its Facebook page, Iowans for Life has praised doctors for refusing to prescribe contraception and advertised events built around trying to scare women out of preventing pregnancy. The group has also posted articles sneering at Planned Parenthood for offering "easy contraception," arguing that contraception and sex education have "exacerbated a promiscuous sexual culture," and claiming that former President Barack Obama created a "forced contraceptive regime." (In reality, no one has been forced to use contraception by the Obama administration or the Affordable Care Act.)

The agenda here is not "life." It's punishing women for having sex. The loss of services to prevent pregnancy and to prevent or treat sexually transmitted infections is a feature, not a bug.

If Texas is successful in restoring its Medicaid funding without reinstating the right of Medicaid patients to use Planned Parenthood services, then expect more states to follow in the path blazed by Texas and Iowa. Anti-choice activists may have lost the ability to shut down abortion services through legal shenanigans, but they will fight to make sure sexually active women are punished one way or another. Going after Planned Parenthood, which caters primarily to low-income patients, has the added bonus of punishing poor people for daring to exist at all. It's the perfect double whammy in the age of misogynist cruelty ushered in by the Trump administration.