Grandiose monuments to anti-American traitors who fought for slavery? That's history we can do without 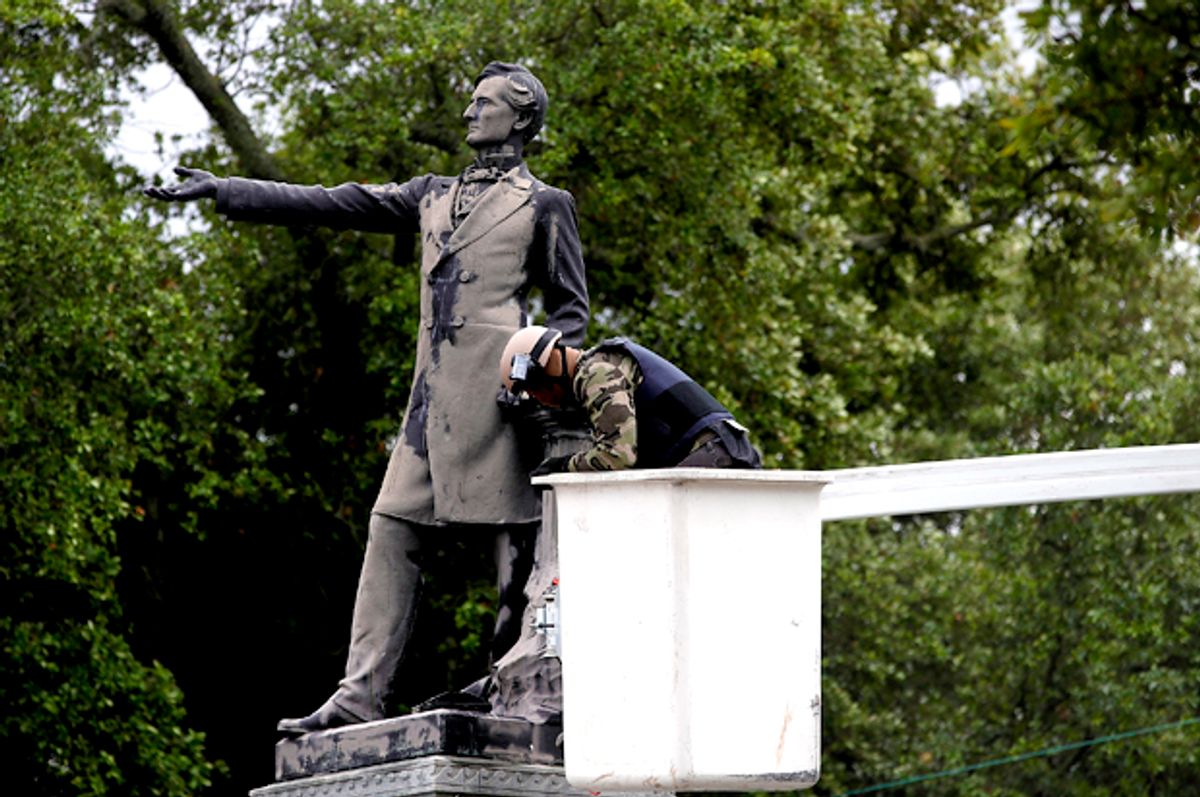 It’s been more than 150 years, but America’s Civil War hangover continues to linger. This nagging, throbbing ache has manifested itself in innumerable ways, with its contradictions being among the most obvious. Any examination of the history of the battlefields themselves, specifically during the postwar decades, provides a clear and convenient illustration of those contradictions, especially when we take a look at exactly what’s happened to these tracts of land since the war ended.

Millions of people from around the world visit our national battlefield parks every year, and anyone paying attention will notice a few things. First, park visitors can’t help but overhear numerous mentions of Abraham Lincoln’s Gettysburg Address declaration that battlefields are “hallowed ground.” Second, despite the ground being hallowed, many battlefields have been thoughtlessly festooned with souvenir stands, fast food joints, crappy motels and even crappier convenience stores — or worse.

If Americans honestly regard Civil War battlefields as sacred turf, we have a weird way of showing it. There are more examples of this contradiction than we could possibly list here, but among the more glaring ones include the fact that there was once a Stuckey’s restaurant smack in the middle of the famed Pickett’s Charge field at Gettysburg, where, on the third day of battle, Robert E. Lee’s hubris got the best of him. He ordered a massive assault on the federal lines using three divisions, upwards of 12,000 soldiers, about 2,600 of whom were killed or wounded, in addition to about 1,500 Union soldiers entrenched on Cemetery Ridge. Hallowed ground, yes but not quite hallowed enough to keep a Stuckey’s franchise away. To this day, a KFC franchise sits on another part of that third-day battlefield.

In Virginia, much of the Wilderness and Chancellorsville battlefields has been overtaken by vulgar Wal-Mart stores, McMansions and shopping malls — the sprawl of the D.C. metroplex devouring countless square miles of so-called hallowed ground. Fortunately, however, an organization called the Civil War Trust is actively reclaiming this land and donating it to the National Park Service, where it belongs, preserved for posterity. For the first time since the war, the tide of suburban consumerism is retreating from those places.

Another contradiction that’s becoming increasingly difficult to digest is the existence of memorials to Confederate generals throughout the South. Yet, the tide is rolling back on this front, too. Confederate flags and various monuments to secessionist commanders like Robert E. Lee and P. G. T. Beauregard are coming down, one by one.

In New Orleans last week, the process continued in earnest with the dismantling of a 70-foot granite-and-bronze love letter to Lee. It’s the latest removal of a monument in that city since jazz musician Wynton Marsalis, in a recent newspaper editorial, condemned the continued reverence to rebel monuments there. In the process, workers tasked with dismantling the Lee pedestal were forced to wear masks and bulletproof vests for fear of retaliation. The hangover continues.

Supporters of the monuments believe that the statues and obelisks represent Southern heritage. What they actually represent is known as the "Lost Cause" mythology — the pervasive fiction that arose after Reconstruction that sought to reunify the nation by whitewashing the secession, the Confederacy and the loss of more than 600,000 lives and the men who were responsible for all three. Movies like “Birth of a Nation” and "Gone With the Wind," along with countless late-Victorian and 20th-century print volumes, have been dedicated to this revisionism. Consequently, it became publicly acceptable — normalized, as we say these days — to have monuments to traitors against the U.S. Constitution placed on American soil, be it the hallowed ground of Gettysburg or city squares in New Orleans and Richmond, Virginia.

It seems overly obviously to say this out loud, but men like Lee, Stonewall Jackson and Beauregard were willing traitors against the republic — officers who took up arms against the United States after an illegal act of secession. And they did so in the name of preserving slavery, the backbone of the Southern economy built upon the subjugation of men and women who were considered subhuman at that time. I hasten to note, though, that Lost Causers still to this day believe the war was fought over “states’ rights,” begging the question: States’ rights — to do what, exactly? To own slaves, of course.

Nevertheless, the Lost Cause endured for more than a century, although some hotheads are still clinging to its fictions today. Hence the bulletproof vests and police snipers protecting New Orleans city workers.

It’s difficult to imagine memorials to other enemies of the United States existing anywhere inside our borders, much less places where Union soldiers fought and were butchered in the name of preserving the Constitution. These marble men of the South who were tasked with murdering every last one of those Union soldiers and, with them  the Constitution itself, have been commemorated with unprecedented and undeserved grandeur. The tiny house just off Interstate 95 in Virginia where Stonewall Jackson died in 1862 is literally known as the Stonewall Jackson Shrine. It’s a fascinating location, well worth preserving. But it’s rather unfortunately named. Jackson, by the way, died of wounds received during the battle of Chancellorsville — on one of the battlefields threatened by D.C. sprawl.

The preservation of hallowed ground where soldiers on both sides were killed, along with the memorializing of the men who fought for the Union and the end of slavery, deserves as much deference and latitude as we can generously provide. On the other hand, it’s impossible to see the wisdom in preserving monuments to the men who spent four years fighting like hell against the Constitution, against unity and in support of slavery. This isn’t to suggest we shouldn’t learn about the (real) Southern cause and the soldiers who fought for it, from Lee on down to the child recruits dragged into the latter days of the war. But Southern heritage and history can easily exist without deifying traitors and slave owners with outsized statues better suited for heroes rather than enemies of equality and the American republic.

The Lost Cause died a long time ago. It’s long past time to tear down its last remnants and rid ourselves of the hangover.