Who was really the most unfairly treated president? Spoiler: It's not Donald Trump 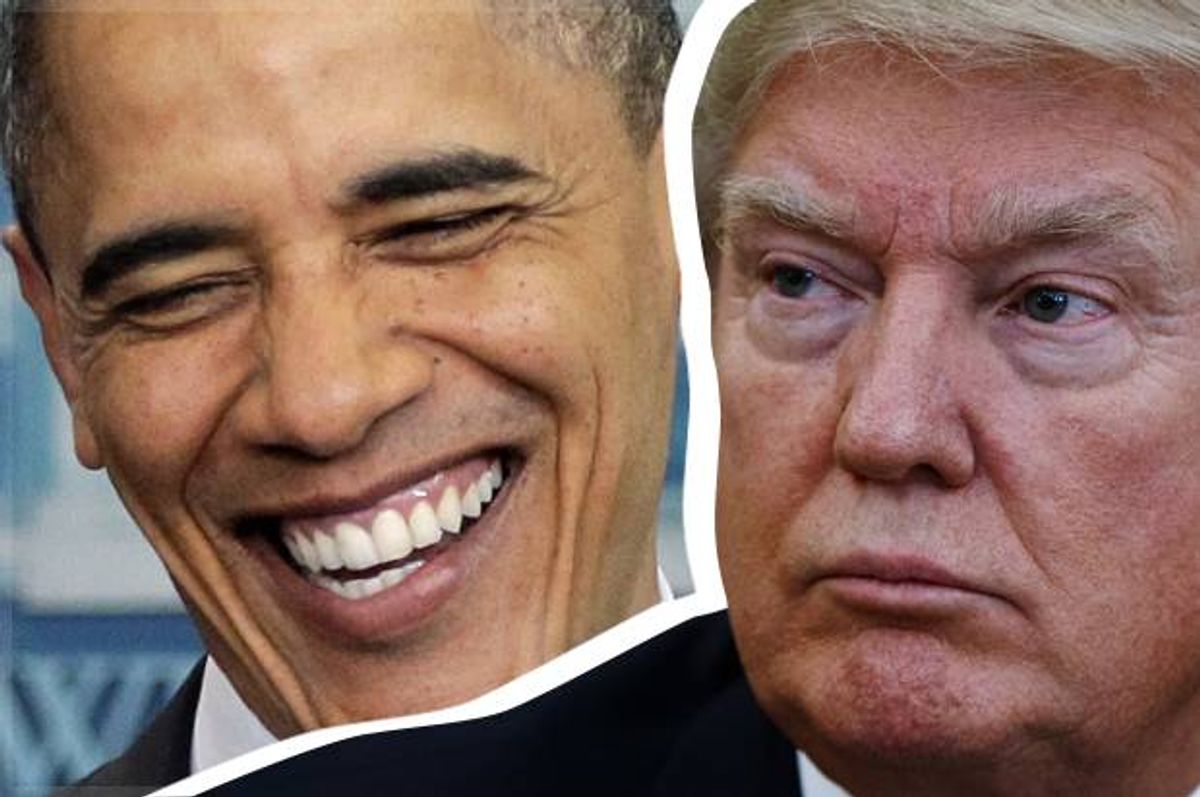 President Donald Trump recently claimed that "No politician in history, and I say this with great surety, has been treated worse or more unfairly." What a short memory the president must have. That dubious distinction belongs to former President Barack Obama, the victim of the biggest and most protracted lie in political history: that he was an illegitimate president, born not in Hawaii but in Africa. It was Donald Trump who used his status as a “star” to publicize that canard and keep it alive, without a shred of evidence and for the cynical purpose of making a splash in Republican politics.

In early 2011, Joseph Farah, America’s birther-in chief, took time away from propagating his claim that homosexuals propagated the Holocaust to take a call from America’s most famous billionaire. Donald Trump told Farah that he shared his suspicion about Obama’s foreign birth and, as reported by the New York Times, asked, “What can we do to get to the bottom of this? What can we do to turn the tide?”

In 2008, when rumors first began circulating that Obama had been born in Kenya, his campaign posted an online a copy of his Hawaiian certificate of live birth, which state officials and independent analysts verified as genuine. Archived copies of the Honolulu Star and the Honolulu Advertiser showed contemporary announcements of Obama’s birth and Hawaii’s vital records recorded his birth.

To revive a controversy buried by so many facts, Trump deployed the “Big Lie,”a favored propaganda technique of history’s dictators. Repeat a lie loudly over and over until people come to believe it. In a six-week whirlwind of media hype during March and April of 2011, Trump pulled birtherism out of Joe Farah’s root cellar, gave it the Trump shine, and made it his own. Trump talked up birtherism on the "Today" show, "The View," "Fox & Friends" and talk shows hosted by Bill O’Reilly and Geraldo Rivera. In a foreshadowing of his successful presidential campaign, Trump found an issue that resonated with the fears of many white Americans about losing the country they knew and loved.

Trump announced that he was challenging Obama "as to whether or not he was born in this country where there is a real doubt.” He “corroborated” this claim with serial fabrications. Obama’s "grandmother in Kenya said he was born in Kenya and she was there and witnessed the birth.” "Why has he spent over $2 million in legal fees to keep this quiet and to keep this silent?" “Obama’s grandparents planted false birth announcement in the newspapers for hospitalization, for welfare, for this, for that, for all of the other assets you get from being a U.S. citizen.” “He doesn't have a birth certificate. Now, he may have one, but there's something on that birth -- it may be religion. Maybe it says he's a Muslim, I don't know.” Trump claimed to dispatch investigators to Hawaii and reported, “they cannot believe what they’re finding,” He never identified a single investigator or explained what they allegedly found.

Trump’s birther lies paid off, “bigly.” He rose to the top of the polls among contenders for the Republican presidential nomination in 2012 before bowing out of the race. Although birtherism had served its main purpose, Trump kept the issue percolating for years. In May 2012, Trump said, “A lot of people are questioning his birth certificate.” Three months later he tweeted, “An 'extremely credible source' has called my office & told me that Barack Obama applied to Occidental as a foreign student -- think about it!” He never identified “the people” or his “credible source.”

During the 2016 campaign, Trump begrudgingly abandoned birtherism in 10 words, saying, "President Barack Obama was born in the United States. Period." But he couldn’t resist recirculating the lie that he had “finished” birtherism or adding on the outrageous new lie that Hillary Clinton had started it in the first place. With Donald Trump and his campaign team leading the charge that Clinton should have been “locked up” for her use of a private email server, she may have been the second most unfairly treated politician in U.S. history.

Allan J. Lichtman is distinguished professor of history at American University in Washington, and the author of "White Protestant Nation: The Rise of the American Conservative Movement."