Is Donald Trump's casino empire linked to money laundering? Past financial crimes may be the president's biggest problem 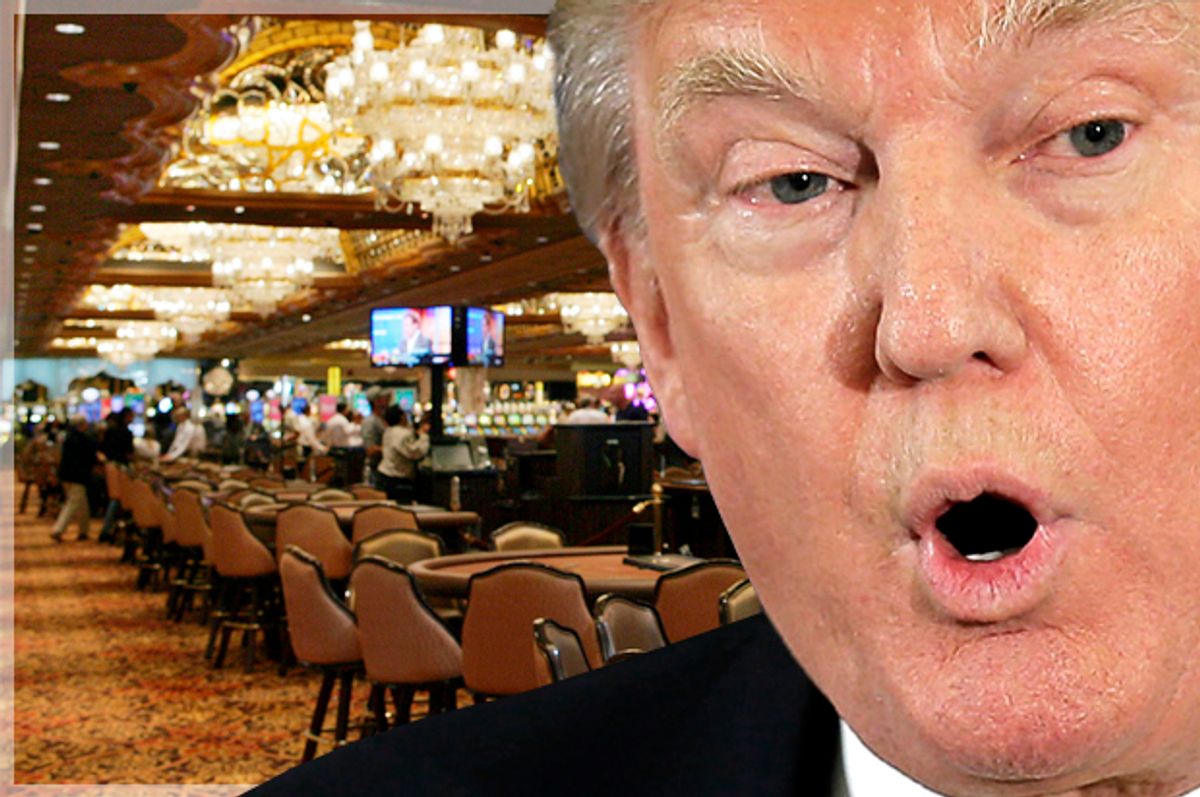 So Donald Trump screwed the pooch again. This time the president did it on camera, standing next to Israel's Prime Minister Benjamin Netanyahu, when he made a point of quieting the room and addressing reporters to say this out of the blue:

He was referring, of course, to his infamous May 10 meeting with Russia's Foreign Minister Sergey Lavrov and Ambassador Sergey Kislyak at the White House, the one when he gave away sensitive foreign intelligence and explained to his guests that he had gotten rid of that pesky little problem he had with former CIA Director Jim Comey. Although there has been some reporting that the original information came from Israeli intelligence, no one has ever claimed Trump told the Russians that. In fact, national security adviser H.R. McMaster had gone to great lengths to explain that Trump had no idea where the information came from. So this was simultaneously a confirmation of reporting that Israel was the source and a confirmation that all classified information should be kept far away from President Trump.

Meanwhile, back in the States, the gusher of news about the Russia investigation continued to flow. Former national security adviser Michael Flynn gave notice that he planned to assert his Fifth Amendment right against self-incrimination rather than testify before Congress. And then there was the usual late-breaking Washington Post bombshell, this time reporting that Trump had asked Mike Rogers, the National Security Agency's director, and Dan Coats, director of national intelligence, to push back on the Russia story after Comey's congressional testimony, as well as that White House officials had looked into the prospect of encouraging the FBI to drop the Flynn probe. It was just another day of gaffes, scandals and lawbreaking in the era of Trump.

But a few stories over the past several days may have Trump and his son-in-law Jared Kushner feeling a bit more nervous than usual. Last Friday among the cascading breaking news, one factoid was mostly overlooked in the big Washington Post story reporting that the Russia investigation had expanded to include a member of the White House staff who is close to the president. See an excerpt below with emphasis added:

Although the case began quietly last July as an effort to determine whether any Trump associates coordinated with Russian operatives to meddle in the presidential election campaign, the investigative work now being done by the FBI also includes determining whether any financial crimes were committed by people close to the president . . .

While there has been a loud public debate in recent days over the question of whether the president might have attempted to obstruct justice in his private dealings with Comey, whom Trump fired last week, people familiar with the matter said investigators on the case are more focused on Russian influence operations and possible financial crimes.

Josh Marshall at Talking Points Memo observed that the investigation may be homing in on the story he's been following for some time about Trump's business and financial dealings over the decades with a whole cast of nefarious characters, including authentic mobster Felix Sater, who has ties to Russian oligarchs and gangsters and may be a U.S. government informant. Over and over again in Trump's past you find connections to criminals and shady characters who operate on the very edge of legality. Marshall noted that for the past couple of decades, Trump has had a specific business model:

Cut off from capital from the big banks and most people interested in not losing their money, he had to do business with people with decidedly sketchier reputations. Those people, often looking for places to park wealth in real estate, had to accept much higher levels of risk than people with clean reputations. That seemed to lead them to Trump.

You may have heard that the congressional investigative committee members have requested that the Treasury Department's financial crimes enforcement network, or FinCEN, provide any information it has on Trump, his businesses, his top officials and campaign aides. CNN received access to 400 pages of this FinCEN information on Trump's casino operations in Atlantic City and found that the Trump Taj Mahal casino broke money-laundering rules 106 times in the first year and half of operation and paid nearly half a million dollars in fines in just one settlement agreement in 1998. The network reported as follows:

According to a dozen anti-money laundering experts, casinos often run into these problems. But getting caught with 106 violations in the casino's opening years is an indicator of a serious problem, they said. The violations date back to a time when the Taj Mahal was the preferred gambling spot for Russian mobsters living in Brooklyn, according to federal investigators who tracked organized crime in New York City. They also occurred at a time when the Taj Mahal casino was short on cash and on the verge of bankruptcy.

One might assume that this is ancient history. But consider this February 2015 Fortune story, published just four months before Trump descended from his golden escalator to announce his candidacy:

The parent of Trump Taj Mahal, one of Atlantic City, New Jersey's struggling casinos, has settled U.S. government charges that it violated federal laws designed to thwart money laundering, court filings show. Trump Taj Mahal agreed to the assessment of a $10 million civil penalty by the Treasury Department's Financial Crimes Enforcement Network, according to a proposed consent order filed on Tuesday with the U.S. Bankruptcy Court in Wilmington, Delaware.

The violations in that case went back to 2003.

Casinos are an obvious choice for money launderers. So is real estate, for that matter. And Trump has been closely associated for years with the kind of people who dabble in such behavior, including Russian mobsters. It's entirely possible that Trump's panic over the Russia investigation doesn't stem from any collusion with the Russian government over the election but rather from his possible involvement with Russian mobsters and oligarchs involved in money laundering and other criminal activities.

Trump may not know much about how the presidency works, but he surely has enough street smarts to know that once the authorities get all up in your business they will follow wherever the trail leads.

There's a reason that the president refuses to be transparent about his financial dealings and we know it isn't because he's so modest. He's hiding something, and a special prosecutor with a mandate to look into financial crimes is probably going to find out what it is.