Ignore the lofty rhetoric: Trump's budget proposal is a massive tax cut paid for by brutally gouging the needy

Mick Mulvaney claims his budget puts "taxpayers first." It slashes taxes for the rich and wreaks havoc on the poor 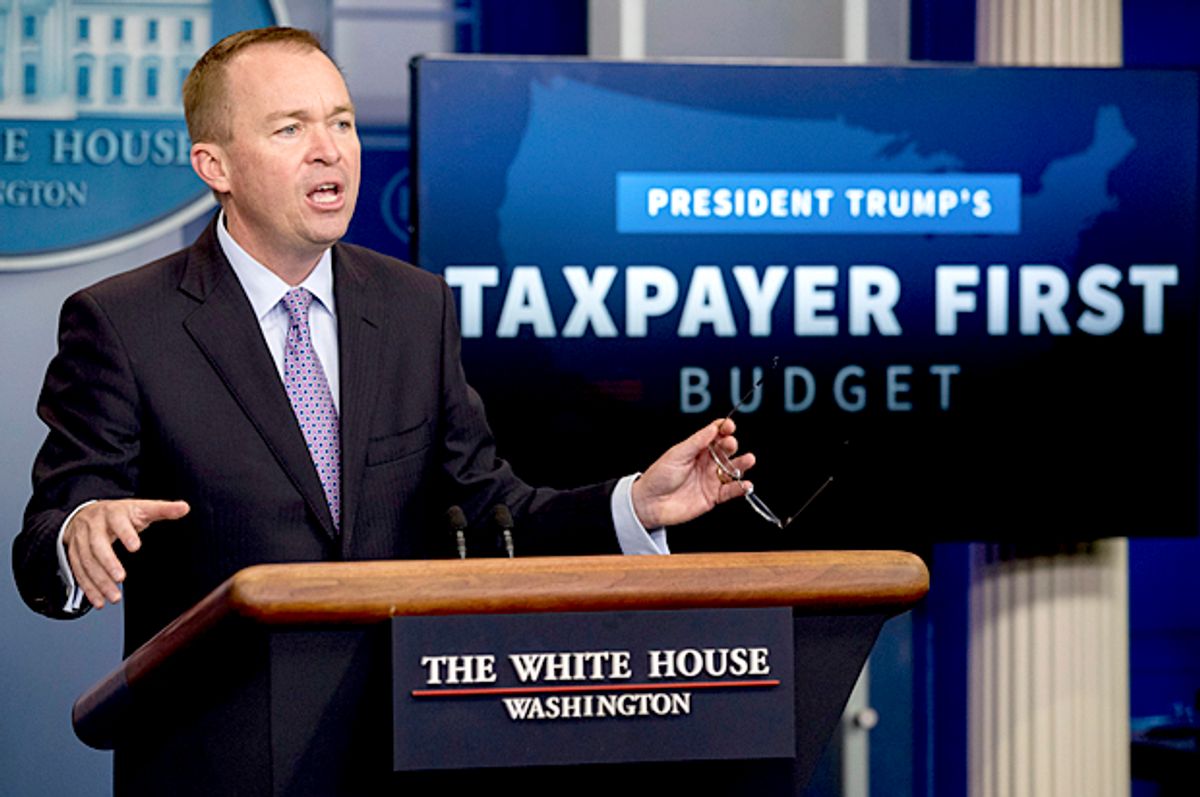 Halfway through Mick Mulvaney’s press briefing on the Trump administration’s newly released budget proposal on Tuesday, I imagined his head morphing into that of a turkey vulture.

“The title [of this budget] should have been ‘A Taxpayer-First Budget’ because . . . we looked at this budget through the eyes of the people paying the bills,” the hideous vulture-human hybrid squawked. A minute later, while explaining what seemed to be his theory of taxation, the vulture-headed Mulvaney snarled, “If I take money from you and I have no intention of ever giving it back, that is not debt. That is theft.” In an editorial the same day, he added that this budget “will reverse that larceny.”

It was a framing of taxation that could have been cribbed verbatim from a right-wing website still being hosted on Geocities. One could imagine this vulture-headed, Mulvaney-shaped nightmare as something out of a Guillermo del Toro movie conducting the briefing as it perched on a dead tree above a landscape littered with the starving and desperate victims of this budget.

Make no mistake; this budget will have victims. Instead of using a scalpel to deftly cut the traditional conservative bogeyman of “waste, fraud and abuse” out of government, it uses a flamethrower to burn down the government to nothing.

The numbers are simply ridiculous. Twenty-one billion dollars yanked out of the Temporary Assistance for Needy Families program, which provides assistance for food and shelter to poor families struggling to cover expenses. A cut of $193 billion to food stamps funding. Cuts to all sorts of other programs that help society’s poorest and most vulnerable — with no plan to fill the sudden, gaping holes in those lives. All so that high-income earners can see further reductions in their taxes from already historically low levels.

Mulvaney framed all this as a way for the government to show compassion toward the taxpayers funding these programs. By implication, the Trump budget adopts the frame that got former Gov. Mitt Romney in trouble during the 2012 presidential campaign — the idea that 47 percent of the public is made up of moochers underwritten by the 53 percent who pay federal taxes. Which does nothing to explain this proposal’s cuts to important scientific research and federal agencies that provide frontline defenses against illnesses and epidemics — which after all do not recognize tax brackets when wreaking havoc on people’s lives.

This budget proposal is not all Trump's doing, despite Mulvaney’s assertion that in writing it, “we took his priorities, we turned them into numbers, and that’s what’s in the document.” Even if we stipulate that this is true, it is worth noting how neatly Trump’s priorities dovetail with longtime Republican goals, particularly those held by Republicans like Mulvaney who crawled out of the Tea Party swamp, to disembowel government spending to the fullest possible extent. The gutting of Medicaid alone — another $600 billion cut in the budget proposal on top of the $900 billion taken out of the program by the American Health Care Act recently passed by the House — has been a Republican dream for decades. This is why House Speaker Paul Ryan is practically giddy about destroying it.

But in a way, the Trump budget is just an extension of the Trump campaign. It posits winners and losers in American society and plants itself firmly on the winning side. It tells all those hard-working Americans in Make America Great Again hats that the president is taking the country back from the elitist trust-fund kids in Brooklyn and freeloading illegal immigrants who stole it, and returning it to the Trumpsters. It tells them that they are society’s winners and will be treated as such, even as it disappears many, many of the government programs that even Trump voters rely on.

The silver lining here is that this is only a budget proposal. Like all presidential budgets, it is dead on arrival in Congress, whose members will actually write the appropriations bills that will fund the government in the next fiscal year. Before it was even released, Republicans were quick to slam Trump’s proposal for underfunding some of their own priorities.

And while the GOP often talks tough about government waste, no legislator wants to be the one who actually makes hard choices that take services away from constituents. No congressperson who values his seat wants to vote for Trump’s proposed 20 percent reduction in the Children’s Health Insurance Program and see an ad in the fall of 2018 starring a kid from his district whose family can no longer afford the child's insulin.

To the extent that presidential budgets are useful, it is as a statement of an administration’s priorities and values. Mulvaney and his boss might claim that theirs are compassionate, but this proposal is not an example of that word that many people will recognize.