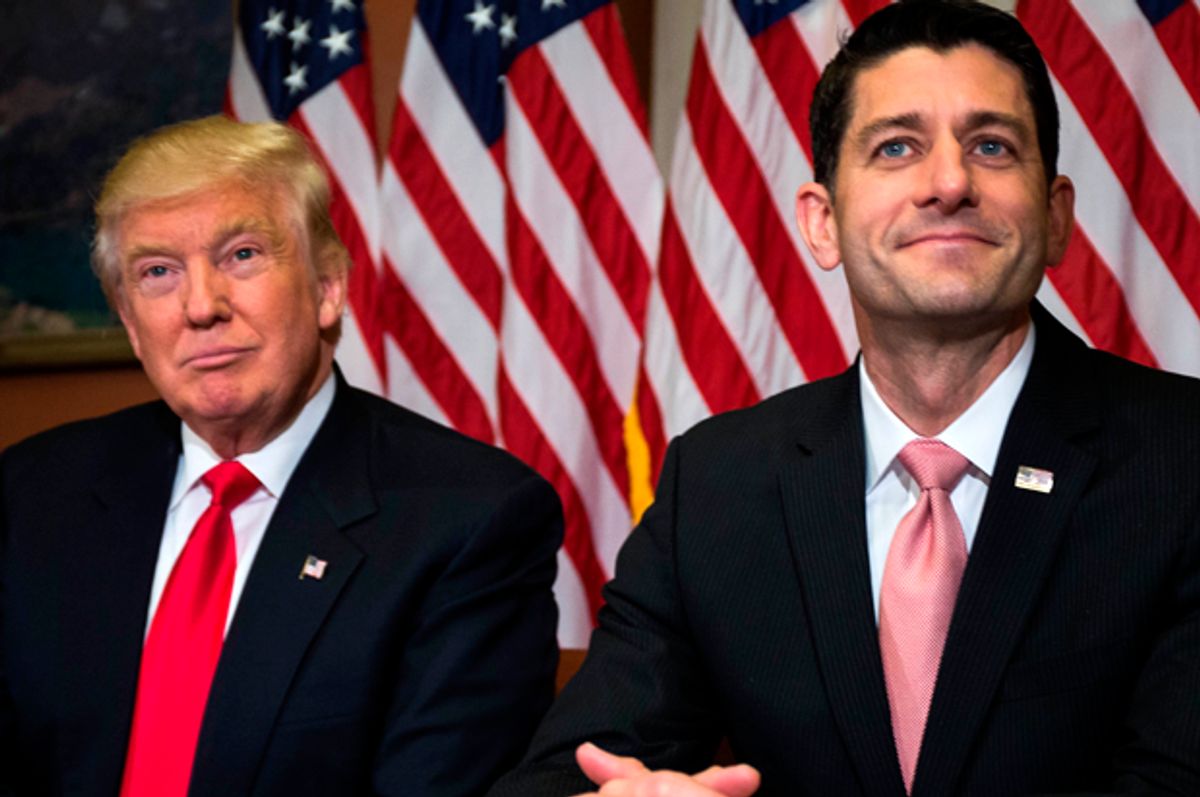 The U.S. intelligence community has long since concluded Russia meddled in the 2016 election, and it was reported shortly after the 2016 presidential election that a GOP superPAC linked to Paul Ryan used illegally hacked material to attack Democratic House candidates. But a bombshell report published on Thursday confirms that Republican political operatives were working with the Russian government to hurt Hillary Clinton and Democrats during the election -- the first direct evidence of so-called collusion.

The Wall Street Journal reported that hacked information was posted on a blog run by Aaron Nevins, the political operative, and then passed along to top Trump adviser Roger Stone during the campaign. The Republican operative in Florida received a trove of Democratic documents from the allegedly Kremlin-linked hacker, Guccifer 2.0. For months, both Congress and the FBI have been scrutinizing evidence that associates of Trump may have colluded with Russia during the campaign.

Nevins confirmed to the Journal that he told hacker Guccifer 2.0 to "feel free to send any Florida based information" after learning that the hacker had tapped into Democratic Congressional Campaign Committee (DCCC) computers last summer. From the DCCC, Guccifer 2.0 released internal assessments of Democratic congressional candidates, known as "self-opposition research," to GOP operatives using social media. Nevins told the Journal that, after receiving the stolen documents from the hacker, he "realized it was a lot more than even Guccifer knew that he had." The stolen DCCC documents also contained sensitive information on voters in key Florida districts, breaking down how many people were considered dependable Democratic voters, undecided Democrats, Republican voters and the like. Nevins made a war analogy, describing the data he received to Guccifer 2.0 as akin to a "map to where all the troops are deployed."

After Nevins published some of the material on the blog HelloFLA.com, using his own pseudonym, Guccifer 2.0 sent a link of the information to close Trump associate Roger Stone — who is currently under federal investigation for potential collusion with Russia.

"I just threw an arrow in the dark," Nevins, who set up a Dropbox account for Guccifer 2.0 to transfer data, told the Journal. “If your interests align,” the operative concluded, “never shut any doors in politics.”

Stone told the Journal that while he did receive a link to Nevins’s blog from Guccifer 2.0, he didn’t share the stolen data published on the blog with anyone.

Anthony Bustamante, a Republican campaign consultant for Rep. Brian Mast, R-Fla., told the Journal that he used the stolen information to plan ad buys and better target a mailer effort: “I did adjust some voting targets based on some data I saw from the leaks.”

Republicans ignored Democrats' pleas not to use the hacked material for political gain.

After Guccifer 2.0 targeted the chair of the DCCC, House Minority Leader Nancy Pelosi sent a letter to Paul Ryan arguing that “the NRCC’s use of documents stolen by the Russians plays right into the hands of one of the United States’ most dangerous adversaries,” and if the National Republican Campaign Committee continued using the materials, the GOP “will be complicit in aiding the Russian government in its effort to influence American elections.” Ryan never responded.

For his part, Trump has repeatedly denied any coordination with Russian officials. The Kremlin has also rejected any connection to Guccifer 2.0. But both the Department of Homeland Security and Director of National Intelligence believe Guccifer 2.0 is tied to Russian military intelligence.