How Trump's budget would gut the economy: Massive cuts to Medicaid and food stamps will have devastating ripple effects 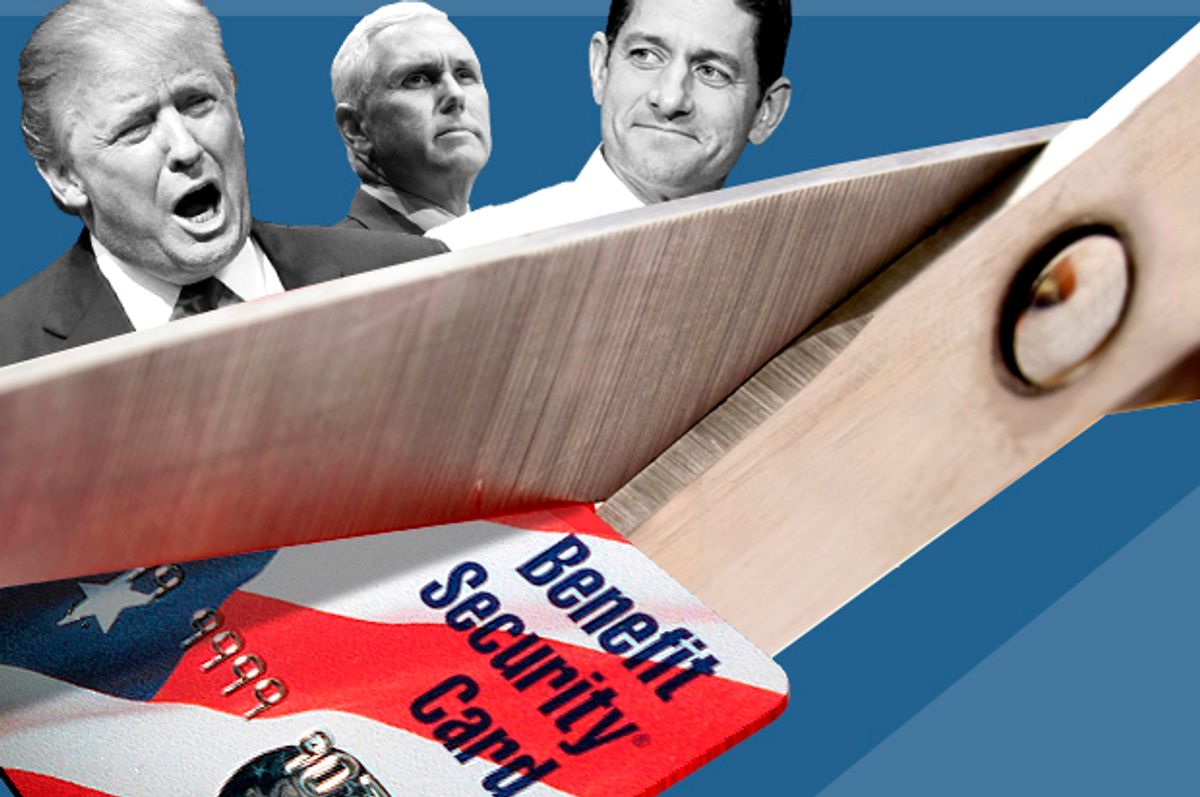 Despite his populist rhetoric on the campaign trail, Donald Trump revealed with his proposal for the federal budget that he's actually just a hyper-conservative Republican that wants to starve the poor so the rich can build mansions for their dogs. The White House's budget, released on Tuesday, recommends $4.1 trillion in spending cuts, mainly for social services.

Office of Management and Budget director Mick Mulvaney tried to spin these cuts as a form of compassion, arguing that people need to look "at the budget through the eyes of the taxpayer" and that they measure compassion "by the number of people we help get off of those [social] programs."

The problem is that these cuts don't just hurt people in immediate need of government assistance to survive. Conservatives spin this story about an unfair system where a bunch of lazy welfare cheats live off government largesse while hard-working Americans are forced to foot the bill. But the reality is that drastic cuts to social spending will do serious damage to the prospects of working people and to the economy at large. If the goal is to help working people do better — as opposed to helping rich people buy diamond-encrusted water bowls for their dogs — then it's critical to keep fully funding programs like Medicaid and the Supplemental Nutrition Assistance Program (SNAP), better known as food stamps.

"When you give people money to spend on food or to go out to get health care, then that money is directly being spent on the economy," explained Kate Bahn, an economist for the Center for American Progress, in a phone conversation.

Conservatives have long argued for "trickle-down" economics, saying that hefty tax cuts for the rich will lead to more investment and more jobs. Instead, it tends to lead to more conspicuous and gratuitous consumption. And yes, some rich people really do send their dogs on luxury overseas vacations.

"In reality, economic growth in the United States since World War II has tended to be greater in times with relatively high top marginal income tax rates," policy analysts Alexandra Thornton and Harry Stein wrote in a 2015 paper for the Center for American Progress, citing multiple studies analyzing the relationship between tax rates and economic growth.

Medicaid and food-stamp money, however, goes directly back into the economy, and into sectors far more useful to the general public than the washing-your-dog-in-Champagne industry: The health care, retail and agriculture industries.

As Sarah Kliff of the Washington Post reported in 2012, Medicaid spending has a powerful economic effect, causing job growth, higher wages and increased tax revenue for states. Food stamps also contribute to the economy, to the tune of $9 in economic growth for every $5 spent on food stamps, according to research done by the U.S. Department of Agriculture. Even Americans who never receive a dime in Medicaid or SNAP will benefit from all this economic growth.

What's noteworthy is that the most affected industries just happen to provide the same kinds of working-class jobs that candidate Donald Trump promised to restore and protect. Every $1 billion spent on SNAP, for instance, results in 9,000 jobs, largely in the agriculture and food production sectors.  The Medicaid expansion under the Affordable Care Act caused an explosion in health care employment.

But as economist Kate Bahn emphasized during our conversation, there are even more hidden benefits to the labor market from social spending, and Medicaid in particular.

Having access to Medicaid can help people avoid what Bahn called "job lock," where they stay with unfulfilling or under-paying jobs for fear of losing adequate health insurance and health care.

“When they knew they could count on having Medicaid,” Bahn said, people were more likely to "take risks in the labor market" and invest in their careers. This "isn’t only good for you as an individual, because you earn more money," she continued, "it’s also good for the overall labor market if people are moving around.”

When workers have more flexibility and choice, she explained, that leads overall to more economic productivity.

Bahn also expressed concern about the negative effects on the labor market from Trump's proposal to bar women who use Medicaid or Title X family planning programs from going to Planned Parenthood clinics.

“In these really crucial years of their working life from ages 18 to 45,” she said, not being able to control when you get pregnant or give birth "can have pretty major negative consequences on women workers."

Research has repeatedly demonstrated that women's economic prospects improve if they have control over their reproduction. In 2013, researchers at the Guttmacher Institute collected the immense body of research on this subject and found that contraception access helped narrow the gender pay gap, improved women's participation in the workforce and helped women go further in their careers because they could better plan their education and career path. While it's difficult to predict how many women will lose access to contraception under the Trump plan, 2017 research by the Guttmacher suggests there aren't nearly enough alternate providers to make up for the loss.

Most Americans probably don't think of themselves as beneficiaries of federal welfare programs, and therefore don't believe these cuts to health care and food assistance will affect them. In reality, however, the money the government spends making sure that low-income Americans have health care and food has widespread effects throughout the economy.

Trump campaigned on the idea that he was a different kind of Republican, the kind who about the working man and who wanted to revitalize communities that have experienced economic decline. This budget proposal makes clear that was a complete lie. Instead Trump and the Republicans plan to suck trillions of dollars out of the economy — money that generates economic activity, creates jobs and helps working people build wealth — and funnel it directly into the stagnating bank accounts of the wealthiest Americans.

And it's become clear that the states that voted for Trump are likely to see the most economic destruction. As Mother Jones reported this week, seven out of the 10 states that rely on SNAP the most voted for Trump. That money isn't just coming out of the food budgets for working people in those states. It will reduce the money going to supermarket employees, farmers, and other people who work in the food supply chain that is propped up in no small part by food-stamp spending.

But hey -- there will still be jobs out there for people who are willing to work in high-end dog spas as masseuses and puppy pedicurists. So in that respect, maybe Trump's tax cuts will trickle down.