The brilliant film “Star Wars” wiped from our collective memory

It had a lot going for it, until it tried to go up against the biggest hit of 1977 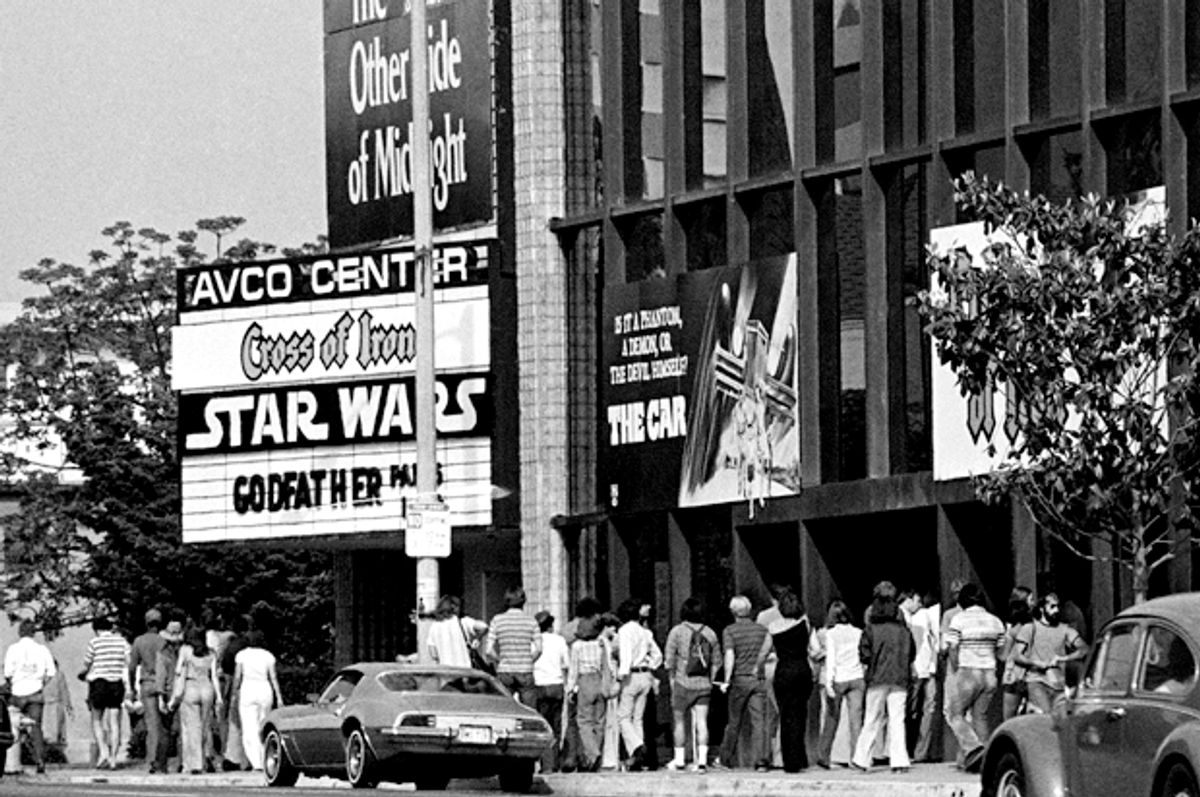 Forty years ago today, a movie starring three unknowns as well as British comedic veteran Alec Guinness, an aging Hammer Horror star and a man in a bear costume debuted in theaters. Production studio 20th Century Fox expected good things from the film created by the director of the relatively successful teen romp, “American Graffiti.” Still the comparatively high-budget, certainly high-concept release remained a gamble during a time when most scifi was earthbound and space operas seemed a spent, creaky genre.

“Star Wars” would go on to earn over $775,000,000 adjusted for inflation and remain in theaters well into 1978. The kind of around the block that hadn’t been seen since the release of 1939’s “Gone With the Wind” and an unprecedented amount of repeat viewers had never been part of the studio’s or theater owners’ plans. The possibility of being bounced out of cinemas before ever getting a chance to catch on certainly never occurred to the producers of “Sorcerer.”

Released one month almost to the day after “Star Wars,” Universal's “Sorcerer” was director William Friedkin’s follow up to the massively successful “The French Connection” and “The Exorcist” — two films that had dominated the box office and critics' lists and made Friedkin one of the most sought after talents in Hollywood.

On top of a proven, name-brand director, “Sorcerer” boasted a genuine movie star — Roy Scheider fresh off successes in “Jaws,” “The Marathon Man” and Friedkin’s “French Connection” — a budget over twice that of “Star Wars” and a tested story, the already twice adapted “Le salaire de la peur” (“The Wages of Fear.”) More than that, the story of a team of misfits transporting a truck full of nitroglycerin through the South American jungle is gripping, innovative and thrilling visually and narratively in a way few movies have been before or since. On paper, “Sorcerer” seemed to have all the makings of a classic.

Basically, if one were looking at the summer movie release schedule in early May of 1977, the smart money would be on “Sorcerer” to take the box-office crown that season. “Star Wars” offered as many upsides as downsides.

Debuting as audiences were still returning to packed theaters for repeat viewings of “Star Wars,” “Sorcerer” would go on to earn less than half of its total estimated budget (rentals included) and sink like a stone. Theaters contractually obligated to run the film would soon switch it out for more “Star Wars” screenings.

The facts that the often-difficult “Sorcerer” received initial mixed reviews from many critics — there’s been a total critical reappraisal in recent years — and that its title seemed to point to a supernatural narrative it could not deliver certainly didn’t help.

In the end, though, it was the nuclear bomb-like birth of the modern movie blockbuster that “Star Wars” represented that pushed this New Hollywood attempt at classic filmmaking out of the public eye before it could create any word of mouth (one of the most important promotional tools for first-run films at the time.) Indeed, it’s arguable that “Star Wars” nuked “New Hollywood” altogether.

Following a troubled budget-busting production in which he managed to alienate many studio executives, Friedkin's found the responsibility for the box-office tied around his neck. The studio completely severed ties with him after the release of his caper flick, "The Brink's Job" the next year. While he would release the controversial "Cruising" in 1980 and maintain a decent schedule of work well into the 2010s, he never again helmed a true big-budget film again. The force behind of some the most successful films of the '70s became, in essence, a moderately successful indie director.

Scheider, who was already in production on "Jaws 2" when "Sorcerer" fizzled fared somewhat better. It's hard to know if the failure of "Sorcerer" helped contribute to the slow, 30-year decline that would mark his later career — perhaps his time had just come.

As noted, after languishing decades as a barely available cult movie, "Sorcerer" has undergone a true reappraisal, earning a re-release at Cannes and a digital transfer for home viewing in 2013.

During his press rounds for the re-release of the film that almost ruined his career, Friedkin struck a philosophical tone. "Whether [a movie is] successful at the box office or with the critics is in God’s hands. I don’t think the public at large is ever wrong," he said. "They know what they want to see, and what they don’t."