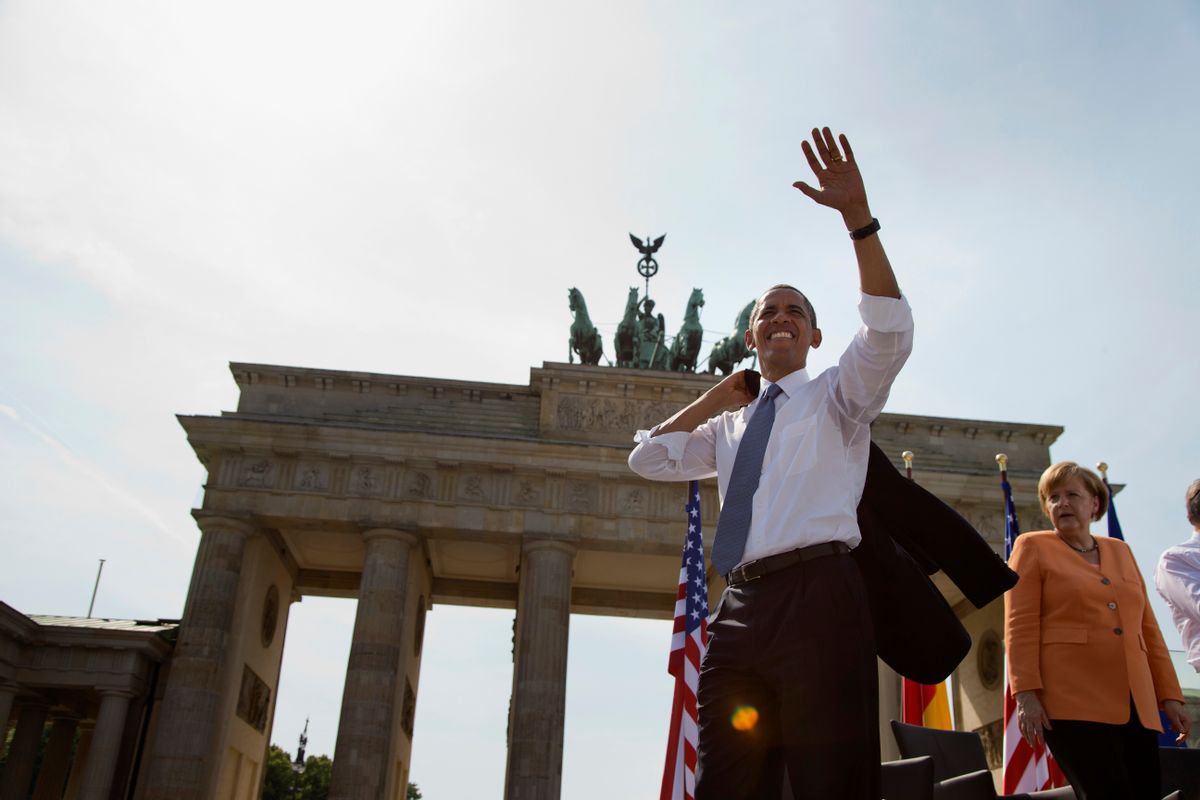 FILE - In this June 19, 2013 file photo President Barack Obama, accompanied by German Chancellor Angela Merkel, waves to the crowd after speaking at the Brandenburg Gate in Berlin. Obama will return to Berlin to attend an event of the Lutheran Church conference end of May 2017. (AP Photo/Evan Vucci, file) (AP)
--

Only hours before German Chancellor Angela Merkel met with President Trump at a NATO summit, former President Barack Obama told a crowd of tens of thousands to fight back against bigotry and intolerance, and praised the leadership of Merkel, according to Bloomberg.

At his first public event with a foreign leader since leaving office, Obama shared the stage at a Lutheran church rally at the Brandenburg Gate in Berlin with Merkel, as reported by Bloomberg. Together they spoke of refugees and conflicts in the Arab world. Obama defended the Affordable Care Act — his signature domestic achievement. "Obviously, some of the progress that we made is imperiled, because there is still a significant debate taking place in the United States," he said, according to NPR. Though Obama noted that it did not insure all Americans, it did help an overwhelming amount of citizens. "For those 20 million people, their lives have been better," he said. "And we've set a standard for what's possible that people can build on."

Obama said that "the international order is at a crossroads" and that it's vital to push back against recent populist trends. "There’s a competing narrative of fear and xenophobia and nationalism and intolerance and anti-democratic trends," Obama said, a remark that was greeted by applause, according to Bloomberg. "We have to push back against those trends that would violate human rights or suppress democracy or that would restrict individual freedoms of conscience and religion."

"We can’t hide behind a wall," he added.

Obama also hit a few notes on human rights, and tolerance of all people. "A child on the other side of the border is no less worthy of love and compassion than my own child. We can't distinguish between them in terms of their worth and their inherent dignity," he said. Obama said that this was not an easy task, and that though nations have "finite resources" they are still obliged to "express humanity and compassion and solidarity with those in need."