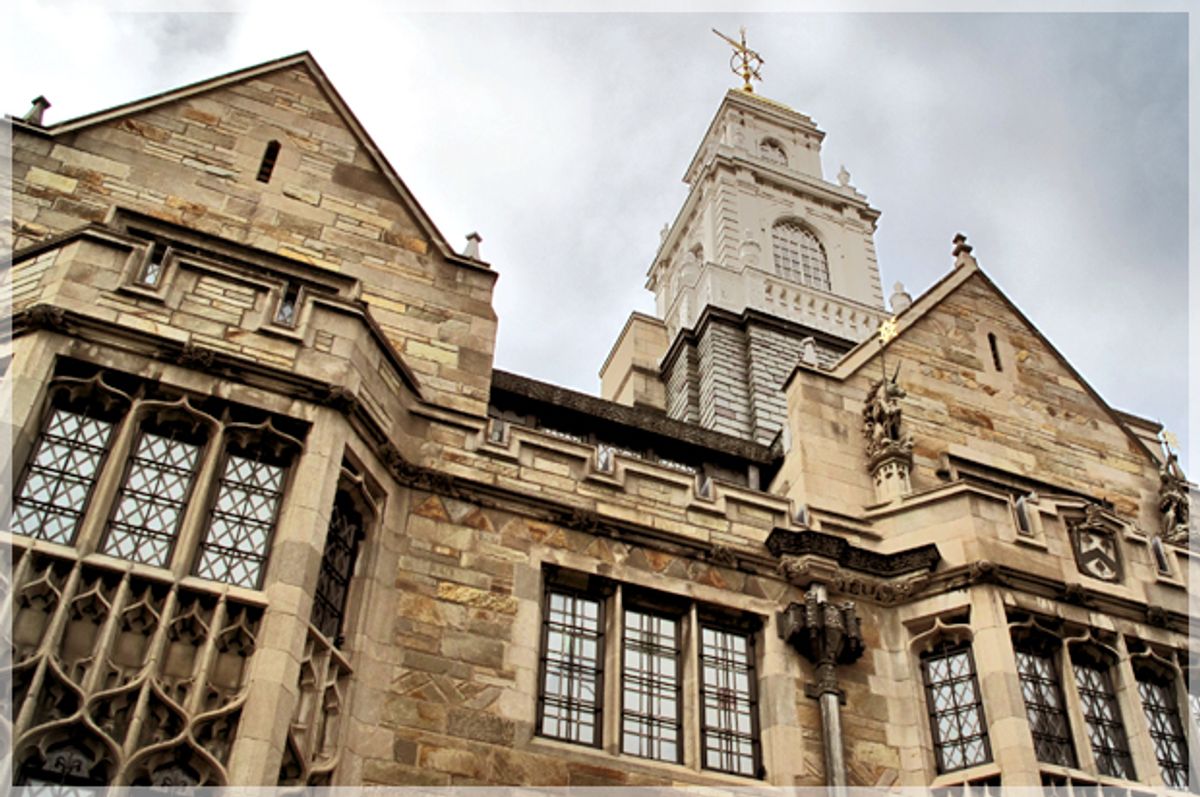 On April 24, graduate students at Yale University announced a hunger strike in support of Local 33 of Unite Here, a labor union that represents workers in a variety of industries (including higher education) in dozens of cities across North America. On May 22 — nearly a month later — more than 1,000 protesters joined the cause during Yale’s commencement.

Their demands? They want Yale to recognize their union and negotiate a labor agreement. The students hope that a contract would ensure them fair wages, mental health care insurance, better protections against gender discrimination and other benefits that faculty enjoy. This is largely in response to the trend in higher education toward casual labor, like graduate student teachers taking on some of the course load of full-time tenure-track professors.

As a scholar of labor and employment relations, I view the hunger strike from a broader perspective of national and state law. Collective bargaining in higher education — and throughout the U.S. — is likely to see significant change under the presidency of Donald Trump. Those changes will affect workers in universities and throughout private and public employment.

The case at Yale offers an instructive example of the legal environment that regulates how unions operate in the private sector — including at private universities like Yale.

Local 33’s organizing strategy at Yale relied on the controversial principle of the “micro-unit,” a subset of employees who can organize and negotiate on issues that impact a larger group of employees. In the case of Yale, nine micro-units were created along departmental lines. That meant that only a small population of graduate student teachers, 228 out of approximately 2600 in total, participated in the vote for unionization.

The National Labor Relations Board (NLRB) currently endorses the “micro-unit” concept. Pro-management organizations, such as the U.S. Chamber of Commerce lobbying group, have expressed strong opposition to “micro-units,” criticizing them as contrary to workers’ interests and to efficient collective bargaining. Smaller units, from the union perspective, are easier and less costly to organize.

Yale is challenging this doctrine in the Local 33 case, claiming that:

“The low vote count (under 9 percent) was due to Local 33’s ‘micro-unit strategy’ of holding nine separate union elections, and preventing students in the rest of the school’s departments from having a say on the question of unionization.”

When Senator Robert Wagner wrote the National Labor Relations Act of 1935 (the Wagner Act), he made important choices about collective action and the American framework of government. For instance, the NLRA is the reason why public universities, as government entities, are governed by state labor laws, while Yale, as a private university, is regulated by the NLRA and federal law.

Another key decision Wagner made was to expedite the union election process by deferring legal questions until after voters had made the choice regarding representation. At Yale, the students voted to unionize using the “micro-unit” strategy, and it’s only at this point in the process that a legal determination on the issue can be litigated.

Yale’s opposition to the unit will be reviewed in federal court only if Yale refuses to bargain with the union and the National Labor Relations Board issues an unfair labor practice charge. By not dealing with the union, Yale is taking a necessary step to test the legality of the “micro-units.”

What’s next for higher education?

The events at Yale raise an important policy issue — one whose resolution will initially depend on President Trump and, subsequently, on the federal courts.

As the situation now stands, Trump can immediately fill two vacancies on the five-member National Labor Relations Board. One current member, Chairman Phillip Miscimarra, is a Republican appointed by former President Barack Obama, and his term extends through 2017. According to reports, Trump is considering three conservative lawyers for the board vacancies, two of whom work for pro-management law firms. The new Republican majority can be expected to overturn rulings from the previous board, including rules about micro-units and union elections.

With these appointments in place, the Yale micro-unit that formed Local 33 would likely be overturned, leaving no union of graduate student teachers in place to negotiate for a labor contract. Indeed, critics of the university’s tactics accuse Yale of trying to wait out negotiations until the new appointees are in place.

Beyond the private sector

Changes are also taking place for public sector unions. As in the private sector, the altered political environment will work to disadvantage labor organizations in public higher education.

U.S. Supreme Court Justice Samuel Alito has actively worked against collective bargaining. His anti-unionism includes a 2012 case involving California teachers, where Alito took the constitutional position that government workers should be given the choice to “opt in” to union dues payments rather than be forced to “opt out.” Such a rule would deliver a lethal blow to public sector unions — including unions at public universities. Without mandatory dues payments, the union’s ability to bargain effectively is severely undermined because of a lack of resources necessary to conduct bargaining.

In 2016, the death of Antonin Scalia was considered the only thing that stopped Alito’s attack on unions. The National Right to Work Foundation has a case in the judicial pipeline that presents another opportunity for Alito. This time, newly appointed Justice Neil Gorsuch (a supposed Scalia clone) will likely tip the scales toward a legal defeat for public unions.

After 14 days of protest — with three Yale strikers continuing to fast – the university issued a statement officially criticizing the strikers:

“. . . actions this week by members of Local 33 raise concerns about the safety and well-being of the demonstrators and about their apparent disregard for longstanding university policies and principles regarding the appropriate time, place and manner for exercising freedom of expression.”

The situation at Yale reflects the deteriorating condition of the American labor movement, which has suffered declining membership density since the 1950s. Richard Freeman, a well-known labor relations scholar, argues that political forces have degraded the bargaining environment through a “war” on unions and collective action.

On the other hand, Yale’s opposition to Local 33’s demands is neither unusual nor unexpected. Employers in this country have a long history of resisting unions, as I show in my book on labor decline.

Despite Trump’s campaign promises to better the economic situation of working-class white men, the president is unlikely to reverse the downward trend in unionization and incomes. The Trump appointees to the NLRB and the Supreme Court most probably will not promote stronger labor organization in the U.S. In the immediate future, his policies will impact the Yale students, who are fighting to be treated more like the faculty whose classes they teach. But those most negatively affected over the long run will be the white, non-college-educated men who make up the backbone of labor unions – the same workers largely responsible for Trump’s ascendancy.