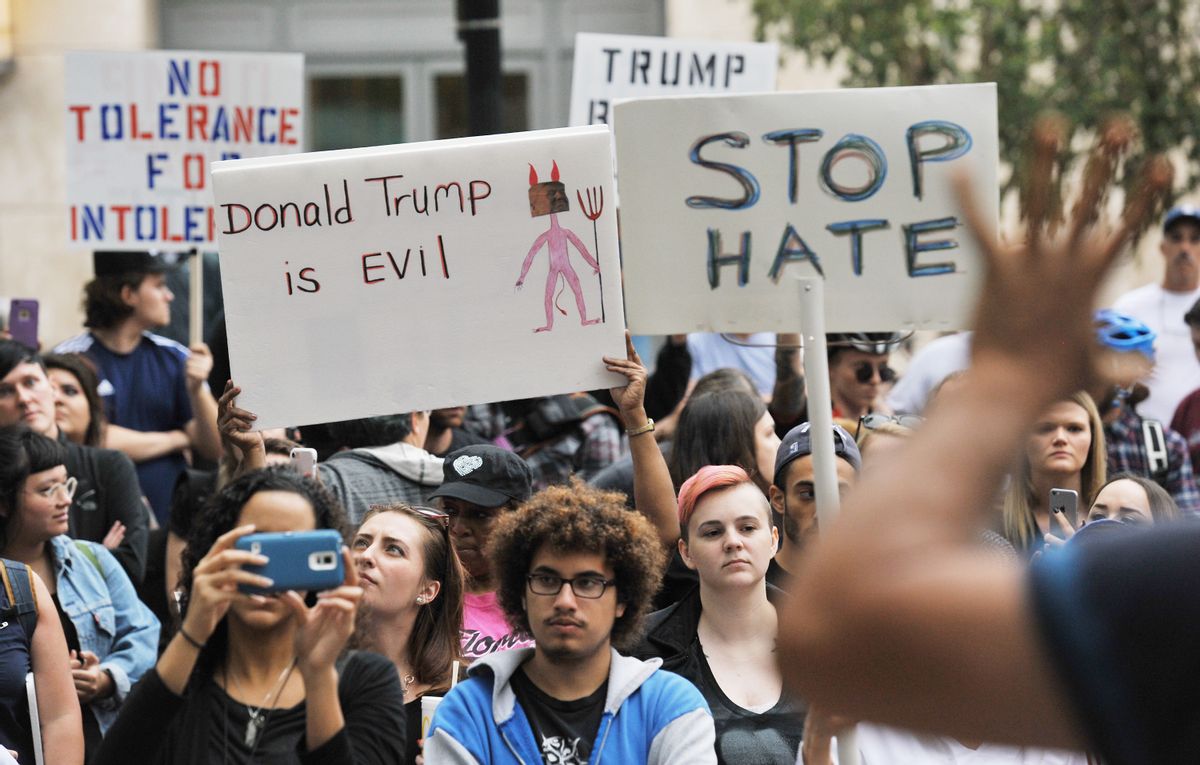 Protesters at an anti-Donald Trump rally listen to one of the speakers in Hemming Park, Saturday, Nov. 12, 2016, in downtown Jacksonville, Fla. Over a hundred protesters gathered for a rally against President-elect, Donald Trump, winning the presidential election. Tens of thousands of people marched in streets across the United States on Saturday, staging the fourth day of protests of Donald Trump's surprise victory as president. (Bob Self/The Florida Times-Union via AP) (AP)
--

U.S. News and World Report recently published its annual “Best Countries” ranking, based on how thousands of people around the world perceive other nations. Switzerland topped the 80-country ranking, followed by Canada and the United Kingdom.

One big surprise was that the United States fell three spots, from fourth to seventh. The U.S. received poor marks for business friendliness, respect for human rights and democracy, and educational quality. These results align with another ranking from Forbes showing the U.S. in decline.

Reputational rankings and similar “best of” lists surely make for interesting dinner conversation, but they do beg an important question: Does a country’s reputation really matter?

The three of us, an economist and two marketers, decided to examine how a change in a country’s reputation might affect its trade relationships. The results were astounding.

How a country earns its rep

A country’s reputation is, in essence, the perceptions that people elsewhere hold about its standing in the world.

There is no uniformly correct way to measure reputation. The U.S. News survey asks respondents to rate countries on categories from “adventure” and “power” to “quality of life” and “citizenship,” while Forbes focuses on business. And a country’s reputation can vary in different parts of the world.

People form those opinions based on the totality of their experiences involving the country, from the products they’ve bought to the people they’ve met while traveling to the images they’ve seen in movies.

Another major factor in a country’s reputation is politics and diplomacy. And in that department, the election of Donald Trump may be contributing to the problem.

Pew surveyed citizens of 10 European Union countries last year and found that 85 percent of respondents had no confidence that Trump would do the “right thing” in world affairs. And since the election, 75 percent of those surveyed around the world for the Best Countries ranking – which came out in April – said they had lost some degree of respect for the U.S.

As a result, experts predict the U.S. will receive 4.3 million fewer visitors in this year than in 2016, in part because changes to immigration policy are making tourists feel unwelcome.

Of additional concern is that relations between the U.S. and some key trading partners have taken a turn for the worse. For example, the U.S. exports more to Mexico than any other country but Canada. Yet the president’s insistence on a proposed border wall has probably harmed the United States’ reputation among Mexican citizens and businesspeople.

Our recently published research (sponsored in part by the Oxford University Centre for Corporate Reputation) provides a window into how intangible perceptions such as reputation can produce very tangible consequences.

To measure various dimensions of country reputation, the surveys included ratings both for the quality of a country’s products and the trustworthiness of its people.

To capture export volume, we pulled data from the United Nations Statistical Division Commodity Trade Statistics Database for each country-pair. We wanted to make sure we were seeing only the potential impact of country reputation on exports (and not the other way around) so we downloaded trade data for 2010, two years after the reputation data were collected.

Combining the export figures with the reputation data resulted in a unique dataset of 861 country-pairs (e.g., Italy’s reputation among the French and Italian exports to France two years later).

We then applied what has been described as “one of the most successful empirical models in economics” (economists call it the structural gravity model of international trade) to test whether this relationship panned out on a global scale. Essentially, the model enables us to test the effect of reputation on exports for each specific trade relationship.

To exclude alternative explanations, we also accounted for a host of other factors that are known to influence trade between countries, such as the size of each market, geographic distance and having a common official language.

We were amazed at what we found.

Each ranking drop in a country’s reputation is associated with a decrease in export volume of 2 percent. As an illustrative example, if the U.S. were to drop one reputational rung among Canadians, we would expect — all other things equal — a corresponding 2 percent decrease in exports to Canada. If we apply the results to 2016 exports, that would mean a potential loss of more than US$5 billion.

From another perspective, the effect is roughly equivalent to an importing country raising tariffs by 3 percent. For a large exporter like the United States (about $1.5 trillion in exported goods per year), a uniform drop in reputation could put tens of billions in manufacturing exports in jeopardy.

Of course, the relationship works both ways. If reputation improves, our model predicts the same corresponding increase in export volume.

Ignore at your peril

The Trump administration has made stimulating exports a priority and argues that “international trade can be used to grow our economy, return millions of jobs to America’s shores and revitalize our nation’s suffering communities.”

Yet, in his efforts to do this, he appears to be ignoring a meaningful ingredient: reputation.

Our research makes one thing clear: Countries ignore their international reputations at their peril. If Trump is serious about increasing exports, a good place to start would be improving America’s — and his — standing in the world.