Donald in Arabia: What did we learn from Trump's encounter with the Saudi monarchy?

While Trump's visit to the famously repressive Saudi kingdom was quite a show, U.S. policy looks awfully familiar 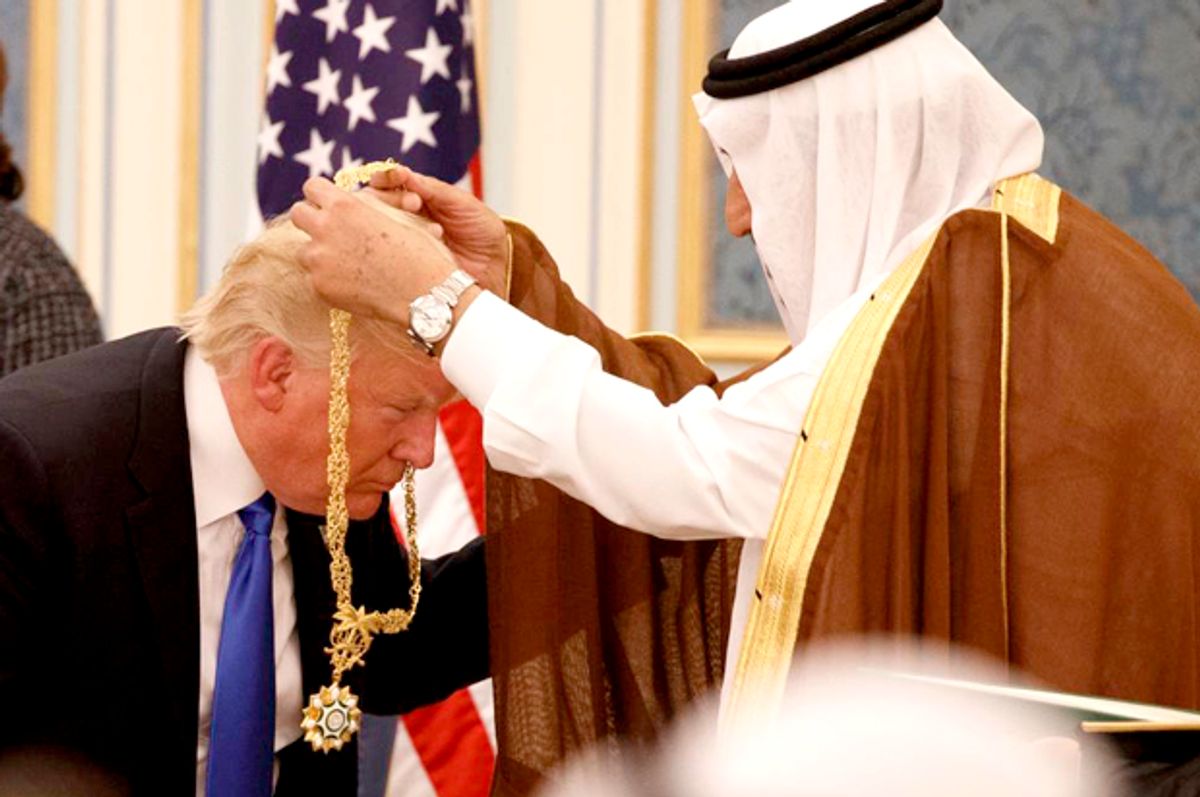 What is there to be said about President Donald Trump’s visit to Saudi Arabia that has not already been said? That the irony of a president who campaigned in large part on suspicion of Muslims would go to Saudi Arabia was astonishing? That the president shamelessly hawked “beautiful American weapons” to a country already awash in sophisticated arms that have been used to pulverize Yemen, the poorest country in the region, in a war that has become a major human rights disaster? That Trump's call to arms to fight extremism and terrorism was made in the nation that produced 15 of the 19 9/11 hijackers, with nary a word about how Saudis have contributed to this phenomenon?

The oddity of Trump’s visit to Riyadh provided a seemingly endless stream of social media snark, along with more serious criticism of the White House’s approach to the Middle East, which seems based on, well, giving a speech. In fairness, there were hints of strategy to be found in Trump’s 3,400-word address, but instead of the dramatic break from the past that the administration had promised, the White House strategy seems awfully familiar.

As much as the Trump administration and the Saudis want to get past the Barack Obama years, the former president hovered like a ghost throughout Trump’s two-day visit. The lavish arrival ceremony and welcome that King Salman bin Abdulaziz Al Saud afforded the new American president was a studied contrast to the low-level reception Obama received on his last state visit to Saudi Arabia in April 2016. It was almost as if the Saudi leadership, in their anger at Obama’s Iran policy and dismay that he would publicly suggest that the Saudis have domestic problems in need of attention, trolled him by rolling out an immense red carpet for his successor and escorting his limousine with Arabian stallions. Trump played his part in this drama to perfection, telling the Saudis everything they wanted to hear.

Try as Americans and Saudis might to draw as sharp a contrast between U.S.-Saudi relations during the Obama years and what they will look like under Trump, they could not quite manage much more than a change in tone. On policy, it was a lot more of the same. The new Global Center for Combating Extremist Ideology seems to be the logical extension of Obama’s efforts in the same area. In February 2015, the United States hosted a summit on combating violent extremism, which produced follow-up regional meetings to tackle various aspects of this phenomenon. It may have amounted to little more than extended speechifying, but it is hard to overlook the fact that Trump is merely picking up where Obama left off.

The same goes with Trump’s plan to fight terrorism financing through something called the Terrorist Financing Targeting Center. It is hard not to notice a reinventing-the-wheel quality to this initiative, given that the Obama team pursued terrorist financing with vigor, though the policy’s origins lie in President George W. Bush’s administration and the fraught weeks and months after the September 2001 attacks on New York and Washington. And that arms package worth $110 billion of beautiful weapons? Part of that deal was done under Obama, though Trump added munitions that the previous administration did not want to sell to the Saudis over concern about how they might be used in Yemen. Even on Iran, which Trump identified as the source of extremism and instability in the Middle East, the White House issued waivers on May 17 regarding Iranian sanctions, in keeping with the Joint Comprehensive Plan of Action (know more commonly as the Iran nuclear deal).

It was not actually the continuities with Obama’s policies that was most striking about Trump’s speech in Riyadh. There was a 1979 feel about the president’s words, specifically a feeling reminiscent of November 1979. That was the month when Commentary magazine, the tribune of the neoconservative movement, published Jeane Kirkpatrick’s essay “Dictatorships and Double Standards.” It was a seminal article at a time when Washington’s strategic position seemed to be under threat globally.

Kirkpatrick, who would become President Ronald Reagan’s permanent representative to the United Nations, believed that President Jimmy Carter’s foreign policy, which emphasized human rights, was to blame for Washington’s predicament. For Kirkpatrick, the stakes in the global struggle with Moscow were too high for American policymakers to care whether leaders were democrats or authoritarians, whether they held up the rule of law or didn’t, whether they preserved freedom of the press or jailed journalists, and whether people had the right to assemble or faced the metal truncheon when they tried. What mattered — in fact, the only thing that mattered — was whether leaders were on the United States’ side in the singular security challenge of the age. Trump echoed this sentiment when he told his audience in Riyadh:

We are not here to lecture — we are not here to tell other people how to live, what to do, who to be, or how to worship. Instead, we are here to offer partnership — based on shared interests and values — to pursue a better future for us all.

Here at this summit we will discuss many interests we share together. But above all we must be united in pursuing the one goal that transcends every other consideration. That goal is to meet history’s great test — to conquer extremism and vanquish the forces of terrorism.

In other words, many of the heads of state and ministers who gathered to hear the president may have been dictatorial bastards, but at least they shared his interest in “bombing the [expletive] out of [the self-declared Islamic State].”

This all sounded great to a variety of partisans and analysts who have been calling for a new approach to the Arab Gulf countries, the fight against extremism and Iran’s malevolent policies. The strategy that Trump articulated in Riyadh may very well reassure the countries in the region that are in most need of reassurance about American support and it has the potential to put the Iranians on the defensive, which would be a good thing. Yet when it comes to defeating extremism and transnational terrorists, Trump is making a mistake by essentially giving the leaders of some of the most repressive governments on Earth license to crack down on their people even more.

As much as the suggestion that repression can lead to radicalization angers these leaders and their supporters, there is no getting around the fact that with each unhappy encounter with the state more people become willing to turn to violence and extremism. That is not to dismiss the ideological component of transnational jihadism, but repression tends to reinforce the ideological appeal of someone like Abu Bakr al-Baghdadi, the self-declared caliph of the Islamic State. So even if the new Global Center for Combating Extremist Ideology develops innovative ways and ideas to blunt the dangerous worldviews that are the foundation of the Islamic State, al-Qaida and other such groups, Trump’s not-so-implicit green light for regional authoritarians to do as they see fit at home has the potential to undermine this good work.

For all of the downright weirdness of Trump’s visit to Riyadh — the glowing orb, the president’s apparent fondness for Egyptian President Abdel Fattah al-Sisi’s shoes — it also demonstrated a remarkable consistency in American foreign policy. Obama administration veterans were all over the Trump speech on social media and in various venues with hot takes, but that may be just because it was Trump. Trump’s words were more a vindication of some of Obama’s major policies rather than a break from them. And Trump’s clarion call to work with the Middle East’s dictators? That too falls well within a long Washington tradition of crafting a foreign policy to deal with the way the world is rather than the way Americans would like it to be.