What is terrorism? What do terrorists want? 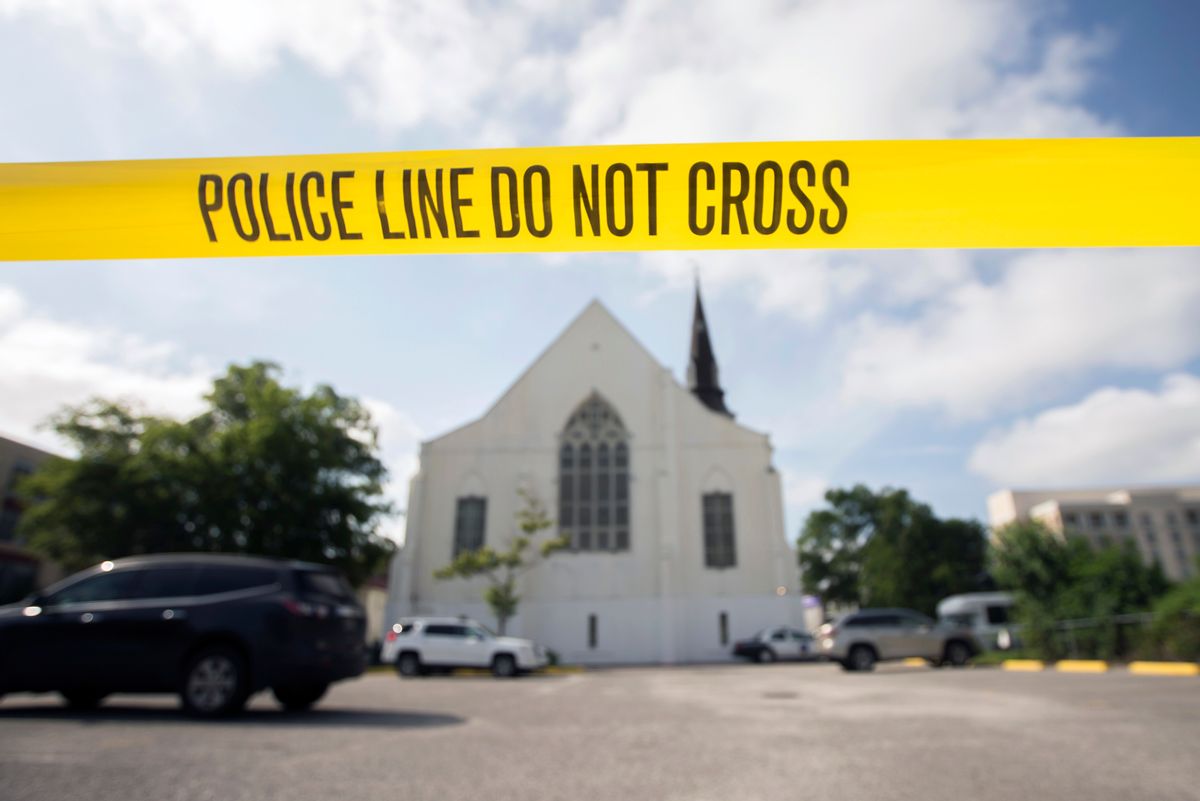 FILE - In this Friday, June 18, 2015 file photo, police tape surrounds the parking lot behind the AME Emanuel Church as FBI forensic experts work the crime scene where nine people where shot by Dylann Storm Roof, 21, in Charleston, S.C. Since the Oklahoma City bombing in 1995, the Southern Poverty Law Center has tracked domestic terrorist plots and attacks in the United States. It lists more than 100, including the slaying of nine black churchgoers during a 2015 prayer meeting in Charleston, S.C. (AP Photo/Stephen B. Morton, File) (AP)
--

Editor’s note: The Islamic State has claimed responsibility for an attack at the Manchester Arena that claimed at least 22 lives and hospitalized 59 more people. One victim was just eight years old. The mayor of Manchester called the attack “an evil act.”

Terrorism is not an ideology like communism or capitalism.

Rather, terrorism is a tactic – a strategy used to achieve a specific end.

This strategy is often used in asymmetric power struggles when a weaker person, or group, is fighting against a powerful nation-state. The violence is aimed at creating fear in the targeted population and often provokes prompt and violent response from the state.

Acts of terrorism followed by violent crackdowns can become a cycle that is difficult to disrupt.

Recently, terrorist groups have begun using the internet and the media to spread fear and affect public opinion. The Islamic State uses the internet to recruit followers.

Nations also use terrorism tactics in other countries to safeguard their own national interest. Iran is known for supporting Hezbollah in Lebanon against Israel. The United States supported the Muslim Brotherhood in Egypt against the communist government of Gamal Abdel Nasser and the mujahedeen in Afghanistan against the Soviet Union.

2. What do terrorists want?

Terrorists are not all after the same thing.

Terrorists often justify their bloody acts on the basis of perceived social, economic and political unfairness. Or they take inspiration from religious beliefs or spiritual principles.

Many forms of terrorism were inspired by warfare between races, struggles between the rich and poor or battles between political outcasts and elites.

Some are ethnically based separatism movements, like the Irish Republican Army or Palestine Liberation Organization. The former cartel of Medellin are considered narco-terrorists because they combine drug trafficking with terrorism tactics to intimidate government and population.

Movements led by the extreme left like Colombia’s FARC are an example of terrorism inspired by a socioeconomic doctrine – in this case, a belief in communism.

Many terrorist groups are inspired by a specific interpretation of religious or prophetic scriptures. Al-Qaida and IS are two related groups that justify their violent actions as part of a crusade against nonbelievers. IS wants to establish a Caliphate, or an Islamic-ruled state.

How different terrorist groups act is informed by what they are trying to achieve. Some adopt a reactionary perspective aimed at stopping or resisting social, economic and political changes. Examples include IS, al-Qaida and the Army of God, a Christian anti-abortion group based in the U.S.

Others adopt a revolutionary doctrine and want to provoke change. Examples include the former Red Army Faction in Germany, the Irish Republican Army and Basque separatists in Spain.

Some terrorists seek revenge, or what they consider justice. They are guided by a single issue, such as animal rights (PETA) or pro-life (Army of God).

3. Is terrorism getting worse?

Despite the intensity of media coverage and public perception, terrorism is actually not more frequent today than a few decades ago. For instance, terrorist attacks were far more common during the Cold War period than during the post-9/11 era. Some experts believe terrorism peaked during the 1970s.

Despite the recent attacks, the U.K. and Western Europe experienced relatively low terrorist activity during the period 2000 to 2016 compared with the period 1970 to 1995.

In the United States, terrorism attacks were in sharp decline from 1970 to 2011, decreasing from approximately 475 incidents a year to fewer than 20.

Worldwide, terrorism is highly concentrated in a handful of countries.

Terrorist attacks in 2014 were mainly concentrated in Afghanistan, Iraq, Nigeria, Pakistan and Syria. These countries saw 78 percent of the deaths and 57 percent of all attacks in the world. Since 2000, only 3 percent of deaths caused by terrorist attacks took place in Western countries, including Australia, Canada, members of the European Union and the United States.

In the U.S., the number of deaths represents 2.2 percent of the worldwide terrorist death toll. The violence committed in Western countries by organized terrorist groups such as al-Qaida or IS represents approximately 30 percent, while so-called “lone wolfs” account for 70 percent of the attacks.

All in all, terrorism activity in Western countries is not worse than before the 9/11 era. The opposite is true.

According to American University professor Audrey Cronin, terrorism as a tactic does not work well. Cronin studied 457 terrorist groups worldwide since 1968. The groups lasted an average of eight years before they lost support or were dismantled. No terrorist organizations that she studied were able to conquer a state, and 94 percent were unable to achieve even one of their strategic goals.

This is an updated version of an article originally published on Sept. 19, 2016.

Frederic Lemieux, Professor of the Practice and Faculty Director of the Master's in Applied Intelligence, Georgetown University