Who in the hell is Callista Gingrich? Everything you were afraid to ask about this suddenly important person

Have whiplash from the news cycle? Get the totally real lowdown on President Trump's pick for Vatican ambassador 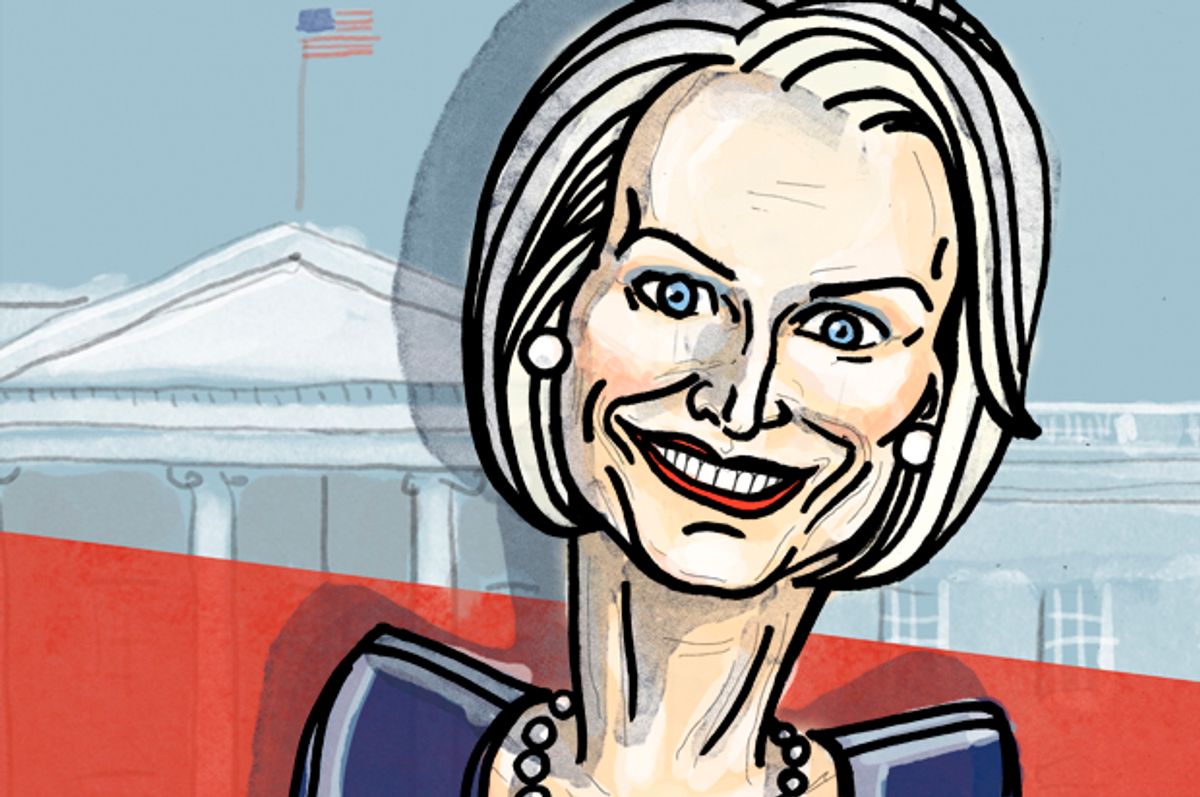 (In this brand-new, hastily conceived premise, Salon will use the otherwise unlimited space of the site to profile a person in the news who has until recently lived largely under the radar. And by under the radar, we mean above gratuitous satire.)

ANCESTRY: Polish and Swiss. Which means legally, she has to be neutral about ethnic jokes.

POTENTIAL NEW GIG-RICH: On May 21, she was nominated by President Trump to be the ambassador to the Holy See. She is awaiting Senate confirmation and a fitting on the TLC show “Say Yes to the Shroud.”

Trump made the decision to nominate Ms. Gingrich weeks ago, but the official announcement was held up awaiting approval from the Office of Government Ethics, where her husband has time-shared three file cabinets since 1996.

Still passionate about music, as ambassador to Vatican, Ms. Gingrich hopes to convince Pope Francis to add a 15th station to the cross, “Easy Listenin’.”

SWAMP DAZE: Upon graduation, she was hired as an intern for Wisconsin congressman Steve Gunderson, which sounds like the name of the guy who was married to Francis McDormand in “Fargo” and designed postage stamps, but isn’t. That was Norm Gunderson. Completely different guy. Ms. Bisek joined Gunderson’s staff full-time after her internship, and four years later met then-House Minority Whip Newt Gingrich. They soon began a six-year affair from 1993 to 1999. During the last two years, Gingrich, by then speaker of the House, was instrumental in pushing for and attaining impeachment proceedings against President Clinton over his affair with an intern. Sure, it sounds hypocritical, but Gingrich’s affair was with a government employee years after she’s been an intern. Completely different guy.

The Gingriches have been married since 2000. In 2002, Newt asked the Catholic Church to annul his 19-year marriage to his second wife, Marianne, on the grounds she had been previously married. The church granted the annulment, but it is believed to be the first recorded use of the phrase, “Wait, wut?” The church later annulled Newt’s first marriage as well, as part of a two-for-one Great Friday! sale.

Despite all that, Newt (who was raised a Seth Rich Conspiracist Baptist) took another seven years before converting to Catholicism. He credits meeting Pope Benedict, listening to his wife sing in the choir and getting special dispensation to hire a proxy kneeler.

Callista still performs in the choir of the Basilica of the National Shrine in Washington. If confirmed, Ms. Gingrich would become the first member of the Trump administration to sing without being subpoenaed.

AUTHOR, AUTHOR, NARRATOR: Ms. Gingrich has authored five best-selling Republican-themed children’s books: “Sweet Land of Liberty,” “Land of Pilgrim’s Pride,” “Yankee Doodle Dandy,” “The Little Engine That Shutdown” and “50 Shades of Reagan.” She is also the voice of many of her husband’s 27 audiobooks, including “Contract With America,” Terms and Conditions of Service Agreement With America,” “Contract With America: Bikini Summer,” and “Newt Jack City.”

PRESIDENT TRUMP ON CALLISTA GINGRICH: “Good guy. He’s a good guy. Wait, his wife? Sure I know her. Great gal. Dynamite lady. I can say that. I can say ‘dynamite lady’ as long as I don’t say where the dynamite is, right? As long as I don’t give the location, like our three aircraft carriers in the Southeast corner of the Gulf of Izmit. Excuse me, Southwest. I put in a word for her with the pope. You know, I met the pope? Wasn’t even on the list, but I got right in. He is something. If I had to narrow it down to one quality, I would say he is something. First thing he did, and he didn’t have to do this, he apologized for some of the cracks he’s made. Said to me, ‘Mr. Trump, Your Holiness, look, I got a little caught up. These guys, these want to sell papers, so I said what I said. It’s all big-time wrestling anyway. If anybody knows that, it’s you. It’s called showmanship. And after I said it, I winked. I distinctly winked, but the guy had his head down, and then it became a whole thing.’ So, I forgave him, because if you know anything about me, I’m all about forgiveness. I could teach him and his cardinal buddies a little something about that. He showed me a lot, this pope. He didn’t have to say what he said, but he did. Actually, I think he had to say what he did because he was looking at me and saw how big, how massive, I was and thought if I don’t apologize, we may have a whole, you know, a whole Montana-emergency room situation here. So, he chose the path of humility. It’s not easy. It took me years, but I got the humility thing down.”

YOU DON’T SAY: Newt Gingrich said he would not move to Rome if his wife is awarded the post. But that was before he found out the Vatican offers unlimited breadsticks.

Callista Gingrich Comedy Newt Gingrich Satire Who In The Hell Is