"Are You Anybody?" Salon talks to Jeffrey Tambor about his new book

In a lighthearted collection of biographical essays, Tambor creates a memoir that doubles as a life manual 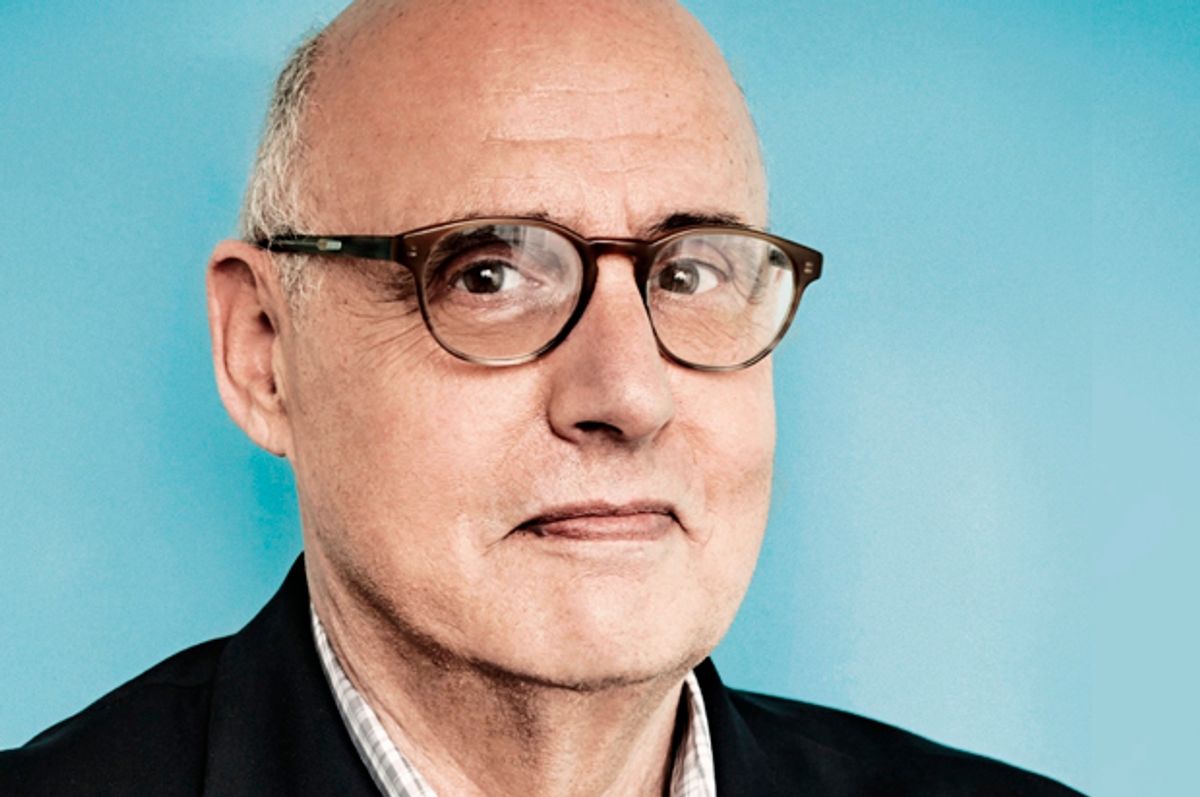 Cover detail of "Are You Anybody?: A Memoir" by Jeffrey Tambor (Crown Archetype)
--

How it works, he explains in his new memoir “Are You Anybody?,” is that following a conversation or an interview, Tambor sometimes calls a person back to clarify something he’s said or make it clearer. “It’s this callback thing that is the matrix of ‘my fear,’” Tambor writes. “It is an act that literally is saying, ‘Are you there?’ ‘Have I gone too far?’ ‘Are you alive?’”

As of this writing, I have not received a "callback" from Tambor even though I spent 40 minutes on the phone interviewing him one day, and another 90 minutes onstage with him the next day, chatting in front of a live audience in Seattle.

This is not intended as a brag or public solicitation of such a call from the Emmy- and Golden Globe-winning actor, but as a remark upon something that may have changed in the man. Tambor recently wrapped up a multi-city tour to support his newest role, that of someone who not only physicalizes stories created by others but writes his own.

Observing him backstage at Town Hall in Seattle, his humble fascination with this new role as “author” was apparent. Tilting his head thoughtfully, he heard the applause at the mention of the roles for which he’s best known — Hank Kingsley, devoted talk show sidekick on “The Larry Sanders Show,” George and Oscar Bluth on “Arrested Development,” Maura Pfefferman on “Transparent” — and smiled gently. There was his answer to “Are you there?”

As for "Have I gone too far?," that horse left the barn the moment “Are You Anybody?” hit the streets. For within its pages is a story about the time Tambor soiled his pants before walking onstage to deliver a line, during a production of “Becket.” Tambor even captures what it sounded like on the page: “Skloosh, skloosh, skloosh,” he writes. This is joined by other embarrassing confessions, including stories about how he alienated the Coen brothers, how he let down Harvey Fierstein, and how heavy drinking and discontent nearly wrecked his life.

But he talks about the circular magic of life, how some of the worst moments circled back to meet him on mountaintops. This, he writes, is because "God is an ironist."

“Are You Anybody?” extols the virtues of going too far as much as it cautions the reader of about the hidden dangers of pushing the edge. And answering that third question — “Are you alive?” — is what “Are You Anybody?” is really about.

Presented as a breezy collection of linked essays, Tambor wrote his memoir for his children, with the basic intention of telling them what he does and how his life path led to them, the people he considers to be his greatest teachers. “We’ve changed positions on the marquee,” he explains. “I'm lower on the marquee, it's ‘ . . . And Jeffrey Tambor.’ They’re my instructors, and every parent will understand that.”

This is coming from the man who once groused about getting a lower guest-star billing than Sylvia the Seal on “The Love Boat."

Tambor's enthusiastic embrace of his flaws, his shadows and his appreciation of the best part of his life are part of the reason why his name is preceded by the words “the great” or “the wonderful” or “the terrific” (as in “the terrific Jeffrey Tambor”) as of late. He's in demand right now; lots of people want to work with him, or just to be near him. But he's also kind, easy to talk to and willing to poke fun at himself. He’s so effortlessly funny that, as he writes in his book, Fierstein once told him, “You don’t even know if you’re kidding or not.”

Nevertheless, he confesses to being visited by an unfamiliar sensation as he tours the country to promote “Are You Anybody?”

Tambor is referring to the jitters every writer faces as they share their prose with the world. Coming from a man who's wanted to be onstage since he was a kid, this is surprising. Tambor has appeared in theater productions and projects for screens large and small, and earned numerous awards for doing so. His work on "Transparent," in which he plays transgender parent Maura Pfefferman, has earned him two Emmys and a Golden Globe.

In total, his acting career has spanned 50 years. “I've been a writer for two, that's basically it,” he admits to me, selling himself short yet again. For Tambor also is the co-owner of Skylight Books in Los Angeles, a natural investment for a voracious reader. (Among his recent raves are the latest works by Richard Russo and Elizabeth Strout.) He knows a bit about great writing.

“You guys know about the terror of the empty page," he insists, "and so I don't take it lightly.”

As seriously as he takes this craft that's new to him, “Are You Anybody?” has a lightness to it that only a person who has lived for years with eyes on him while consistently observing the world can achieve. Tambor’s face is more widely recognized these days than ever before, but his assured, gentle baritone is even more unmistakable. His gentle conversational tone comes through while reading “Are You Anybody?,” especially when he celebrates his quirkiest habits.

“I think everyone needs to know that I steal biscotti on Delta Airlines,” he quips. “People need to know that.” He also wakes up every day to a cold cup of coffee, brewed the previous night and placed on his nightstand before bed, which he enjoys as he reads before he starts his day.

Asked why he doesn’t set up a machine to brew him a hot cup as he wakes, he sighs. “Here's the thing,” he tells me. “It's an old habit, and I lead a sober life. Give me a couple of wild moves. Let mine be cold coffee, okay? Holy mackerel. I don't smoke, I don't drink, come on.”

Many of the stories that Tambor shares in “Are You Anybody?” are connected to stage and screen roles, though he saves his most affectionate chapters about “The Larry Sanders Show” and its creator and star Garry Shandling, “Arrested Development” and “Transparent” until the end of the book. (That's fitting, given that the story on the latter two is still being written. Production just wrapped on Season 4 of "Transparent," and Netflix recently announced it has picked up a fifth season of "Arrested.")

Prior those passages, Tambor uses scenes from his life to speak to universal lessons about fear (which he’s named “Old Mrs. Cohen”), doubt (he refers to it as his "vultures") and failure (a necessity to reach success), as well as the upside of doing something badly and the absolute importance of holding on to the power of “No.” He learned these lessons by confronting darker passages in his life. Those valleys, he told the people who came to see him in Seattle, are life’s equivalent to a dancer’s plié. The deeper they go, the higher the leaps that follow. “You can’t leap without those,” he said.

Equally crucial — so much that he named a chapter for it — is the willingness to say “fuck ’em.”

“You know that thing where you're trying to do the crossword puzzle, and you're trying to fit the word that's in your head in the puzzle, and then you go ‘Ugh!’ and you walk away, and then it comes to you. I'm interested in that moment,” he tells me. “The release of expectation, and the release of pleasing yourself and pleasing anybody. Breaking the mindset. ‘Fuck ’em’ is that. It's not ‘fuck you,’ it's ‘fuck ’em.’ You got to go to work with that.”

Here’s another exercise Tambor does with students and live audiences. You can do it right now: Extend one arm. Take the opposite hand, and cup it under your elbow. Now rest the weight of your arm in that hand.

That, he says, is what support feels like. “That’s what I want you to seek in your life; that perfect hand that says, I got you,” Tambor writes.

This, too, is what “Are You Anybody?” aspires to be: Support. Memoir blended with self-help, for both author and reader.

After Tambor said his goodbye and left Town Hall that night, it occurred to me that I neglected to ask him about a quote in the front of the book. Ascribed to James Barton Hill, who read the actor’s palm in 1969, it says, “It’s going to happen for you, but it’s going to happen very, very late.”

For a moment I promised I’d ask him about that if I get one of his famous “callbacks.” Since I know what those mean, I hope I don’t. Besides, the world already knows that fortune is still coming true.