Why 2017 is the year of Jack Kirby, comics' most influential creator

This August will mark the 100th anniversary of the birth of comic book artist, writer and editor Jack “King” Kirby 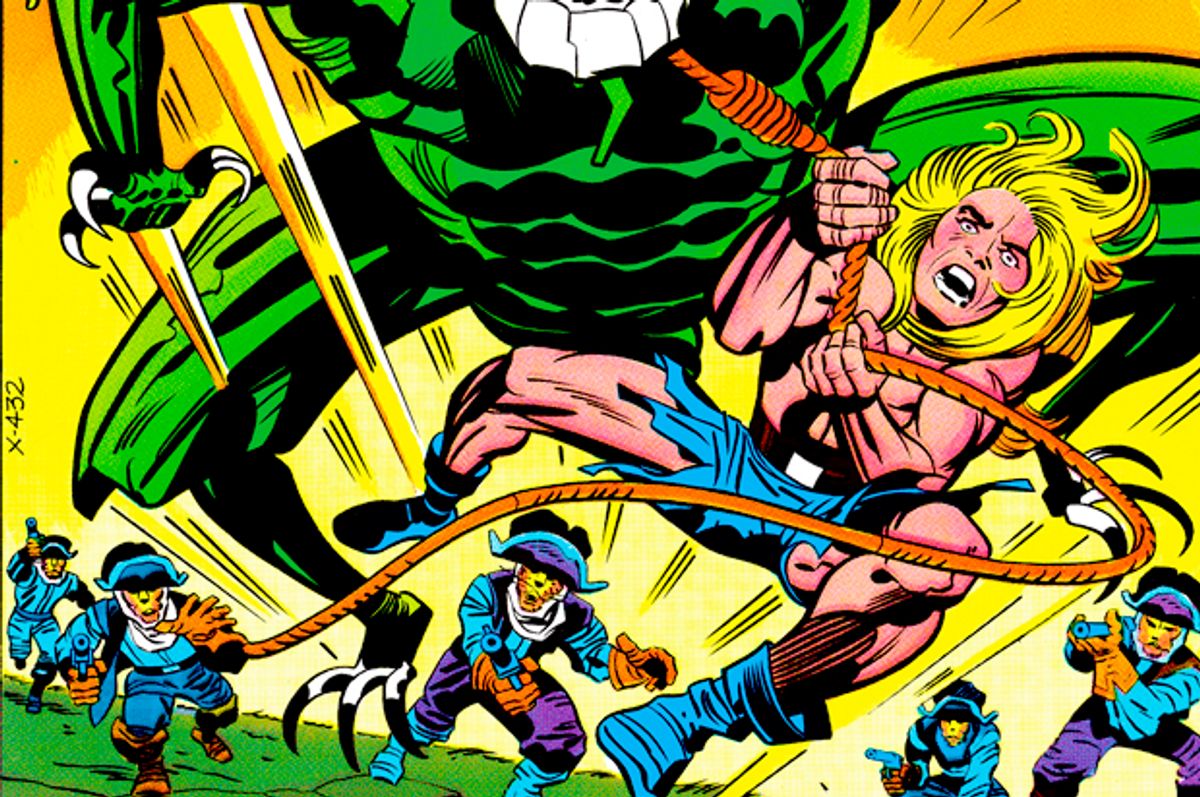 This August marks the 100th anniversary of the birth of comic book artist, writer and editor Jack “King” Kirby. But 2017 would be his year anyway.

Kirby’s Marvel Comics heroes, such as Captain America, the Avengers, the X-Men, the Hulk and Thor, are all over screens large and small. Even his more obscure creations, such as Ego the Living Planet (featured in “Guardians of the Galaxy 2”) and the Inhumans, are starting to surface in mainstream pop culture. Some of Kirby’s New Gods — who many consider a direct influence on "Star Wars" — are expected to appear in DC’s forthcoming “Justice League” movie.

Kirby’s influence on comics is as fundamental as Shakespeare’s on literature. His list of  innovations in the medium stretches from the 1930s to 1980s. His influence is obvious in artists such as Cliff Chiang, Shaky Kane, Steve Rude, Tom Scioli and Walter Simonson, but all comics are at least a little Kirby-esque.

Michael Allred — who’s currently illustrating two series about Kirby characters, “Bug! The Adventures of Forager” and “Silver Surfer” — recently told Comics Beat that Kirby’s influence is "in virtually everything, whether fully realized or not. Much like The Beatles have consciously or unconsciously influenced all pop music since the '60s.”

Among his career highlights, Kirby co-created the genre of romance comics with Joe Simon. Simon and Kirby also created Captain America, who punched Hitler on the cover of Captain America No. 1, mere months before we entered World War II. Though known best for a bombastic action style and mythological subject matter often involving cosmic beings, Kirby was not bound to any genre. We wrote and drew westerns, crime, war, humor, romance and more.

Some of Kirby’s most striking work involved monster comics in the early 1960s; his Spragg and Groot (later reinvented as part of the Guardians of the Galaxy) must have looked bonkers on the comic shelf when they debuted. Kirby’s sci-fi work in the '70s was astounding, including a “2001: A Space Odyssey” adaptation that out-cosmic-ed the movie. In the 1980s, Kirby’s “Captain Victory” and “Silver Star” series helped Pacific Comics get off the ground, spurring the creator-owned comics scene that has blossomed today. The story of comics is largely the story of Kirby.

Kirby made his most lasting impact from about 1961 through 1972, going on an astounding run of creativity. In about a decade, the ridiculously prolific and innovative Kirby co-created the Marvel Universe, then moved to DC to create another mythology. This is the work that dominates pop culture today.

At Marvel, Kirby worked with Stan Lee to create just about every significant Marvel hero, villain and concept, from Cosmic Cubes to the planet-eating Galactus. Lee has received disproportionate credit for their work, partly due to a misunderstanding of what the two creators actually did. As Marvel Comics was exploding in the 1960s, Lee had too many comics on his plate to crank out full scripts. So he would come up with short plot summaries and let his two visionary artists — Kirby and Steve Ditko — plot out the issues they illustrated. Lee would then return to fill in the dialogue. Known as “Marvel method” or “Marvel style,” this process created many classic comics. It was also partly responsible for Kirby and Ditko not getting due credit or compensation for their work. Few understood that the illustrators were writing as much, if not more than, the writer.

Frustration with Lee and Marvel led Kirby to jump to DC in 1970, at the height of his considerable powers. The first thing he did at DC was invent a brand-new cosmos: the Fourth World, featuring the New Gods of Apokolips and New Genesis. This sci-fi-infused, Bible-inspired, techno-mythological story surfaced as an interlocking narrative via four separate series. Beyond ambitious, what Kirby offered was decades ahead of its time.

Parts of Kirby’s Fourth World are uncannily like "Star Wars," which emerged later in the '70s. Kirby’s main baddie was a stone-faced tyrant named Darkseid (pronounced “dark side,” a favorite "Star Wars" term). Darkseid’s main foe was Orion, a New God who discovers he’s Darkseid’s son. All the New Gods are bound by the Source, which is a hell of a lot like the Force. When you throw in Darth Vader’s resemblance to Dr. Doom, another Kirby creation from back at Marvel, it’s hard to escape the feeling that the Kirby heirs deserve a yearly check from Lucasfilm.

It’s a sad theme of Kirby’s life that this great man, who had to fight his way out of the slums of the Lower East Side and fight Nazis overseas, also had to battle for proper credit and compensation. One of Kirby’s most famous quotes is, “Comics will break your heart,” and they must have broken his, since the corporate entities he enriched so seldom treated him right. Marvel’s mistreatment of Kirby was a particular insult, since Kirby essentially built that company, brick by cosmic brick. That situation has been somewhat remedied for the survivors of Kirby’s family: Marvel settled a 2014 lawsuit with the Kirby heirs that was headed to the Supreme Court. His heirs are finally getting at least some of the wealth their father created.

Yes, we're surrounded by Kirby’s characters and influence at this moment, but, right now, we could use more people of his character.

It's easy to imagine that Kirby the person — who died in 1994 — would be appalled by the rise of nationalist, proto-fascist movements around the world (though probably not surprised). Many of his characters and story lines warned against a resurgence of the fascism that Kirby personally fought against in World War II, where he helped liberate a concentration camp and almost lost his feet to frostbite.

Freedom is the common denominator in the extraordinary life of Kirby. As a soldier, he fought for freedom. As a creator, he worked within the suffocating world of corporate-owned comics to create immortal characters and mind-bending artwork that today is featured in gallery shows.

One of Kirby’s signature concepts was the Anti-Life Equation — a powerful MacGuffin pursued by Darkseid. If found, the Anti-Life Equation would allow Darkseid to control everyone in the universe, fulfilling his ugly desire for control. Jack Kirby, through his life and art, fought against such evil on more fronts than just about anyone — a real Captain America.