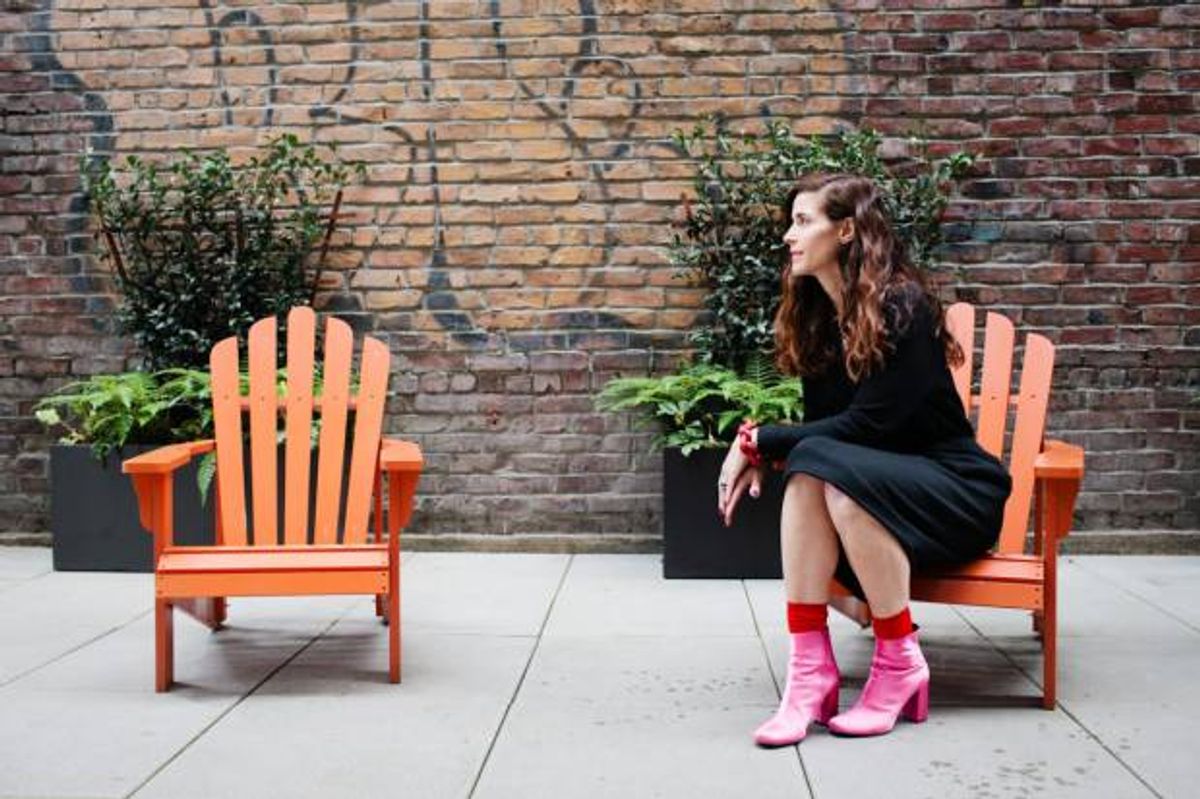 April Pride poses in the well-curated passageway of the downtown building where Van der Pop is located in Seattle. (Kristen Angelo/Narratively)
--

April Pride is standing on a side street north of Little Italy in New York with a cell phone pressed against her ear, telling someone on the other end that she needs ten-to-fifteen feet of rope. She’s traveled here for one night from her home in Seattle to host a salon about cannabis and sex at the Alchemist’s Kitchen, a shop in the East Village that sells herbal remedies and botanical medicines. But first, she’s ordering material for a sail she’s erecting over the entrance to her shop called Van der Pop in Seattle’s Capitol Hill neighborhood, which sells high-end cannabis products for women. It’s a hard-to-find, sleek spot located up some stairs and above a restaurant. She wants to give her clients as much privacy as possible.

“Women don’t want to go into dispensaries,” Pride says, noting men run many of the shops. “They find them intimidating and they’re worried they’re going to run into their kid’s teacher.”

Pride, who is 41 with free-flowing auburn hair, launched Van der Pop in January 2016 and has become an unlikely voice for reversing the stigma that has followed women smokers for years.

Read more Narratively: Courtney Williams Is on a Mission to Get Black and Brown People to Bike

Dasheeda Dawson, the southwest regional market leader for Women Grow, an organization that connects women in the cannabis industry, explains when she “came out of the cannabis closet,” other women of color criticized her for being open about smoking around her thirteen-year-old son, especially having grown up during the War on Drugs.

“I think the judgment is that you don’t have a high regard for yourself,” she says.

Pride also credits Nancy Reagan’s “Just Say No” campaign to her being anti-drug for much of her childhood. She grew up in a Virginia town where people maintained southern hospitality, but extended invites into their social circle based on a family’s standing. Her parents openly smoked joints and she still remembers how appalled she was. She didn’t smoke in high school, but began warming up to marijuana in college and was especially turned on to an easy-going lifestyle after visiting the west coast one summer.

Now, this demographic is gaining a foothold in the industry. Thirty-six percent of executives are female compared to just twenty-two percent in other industries,and women make up forty percent of users annually. Of these women, over eleven million are over the age of 26. Under two million are teenagers.

Pride broke into the industry with little knowledge about the science and research behind the drug’s benefits, but knew it made movie night with her husband more fun, helped her bond with her kids, and boosted her sex life. For the most part, she seems like an average working mom who enjoys getting high.

“When I discovered Van der Pop, I thought ‘What a breath of fresh air,’” says Gigi Mae Cueva, a merchandising consultant who wants to work with Pride and is a cannabis user herself. “Men just think women are such delicate figures that it’s not what they expect. I think with [Pride] coming into play, it sheds some light that we do think about [weed] in a certain way, in a sexualized way. I think it’s great Van der Pop can break that mold.”

The idea behind Van der Pop is to create chic products that mimic other aspects of customers’ lives. If they can have beautiful purses, why shouldn’t their weed accessories be up to par, too? Several of Van der Pop’s products are designed to maintain discretion as well. One of Pride’s newest items, a leather purse called Poppins Stash Bag (named after Mary Poppins’ medicine bag stowing her ‘spoonful of sugar’), is outfitted with a bank lock to keep out snoopers. She’s also planning to sell swaths of odor-blocking fabric so women can arrive at cocktail parties without betraying their stashes to hostesses or guests.

Van der Pop has also become a place to talk freely about topics like sexual pleasure, menopause, cramps, and the portrayal of female users seen on social media or in advertisements, like “dab girls” who smoke in thongs or pose with a bong between their legs. Pride whips out a water-stained copy of mg Magazine, a leading cannabis trade magazine, and flips to an ad featuring a photo of a woman in a low-slung dress. She comments that this is modest by usual standards.

For about an hour after the talk ends, the women mingle and consider the products. One group revisits the CBD clitoris revelation. “Who wouldn’t want that?” a woman asks rhetorically.

Later, Pride grabs an IPA to decompress. She and her husband don’t drink in the house, so this is a treat. As the night wears on, she goes outside to smoke a joint. She thinks the event went well and approves of the intimate setting. It makes women feel comfortable asking potentially embarrassing questions.

“It’s going to be impactful if it’s grassroots,” she says of the movement. “No pun intended.”