While some some veterans’ charities do squander donors’ dollars, others make the most of donations. 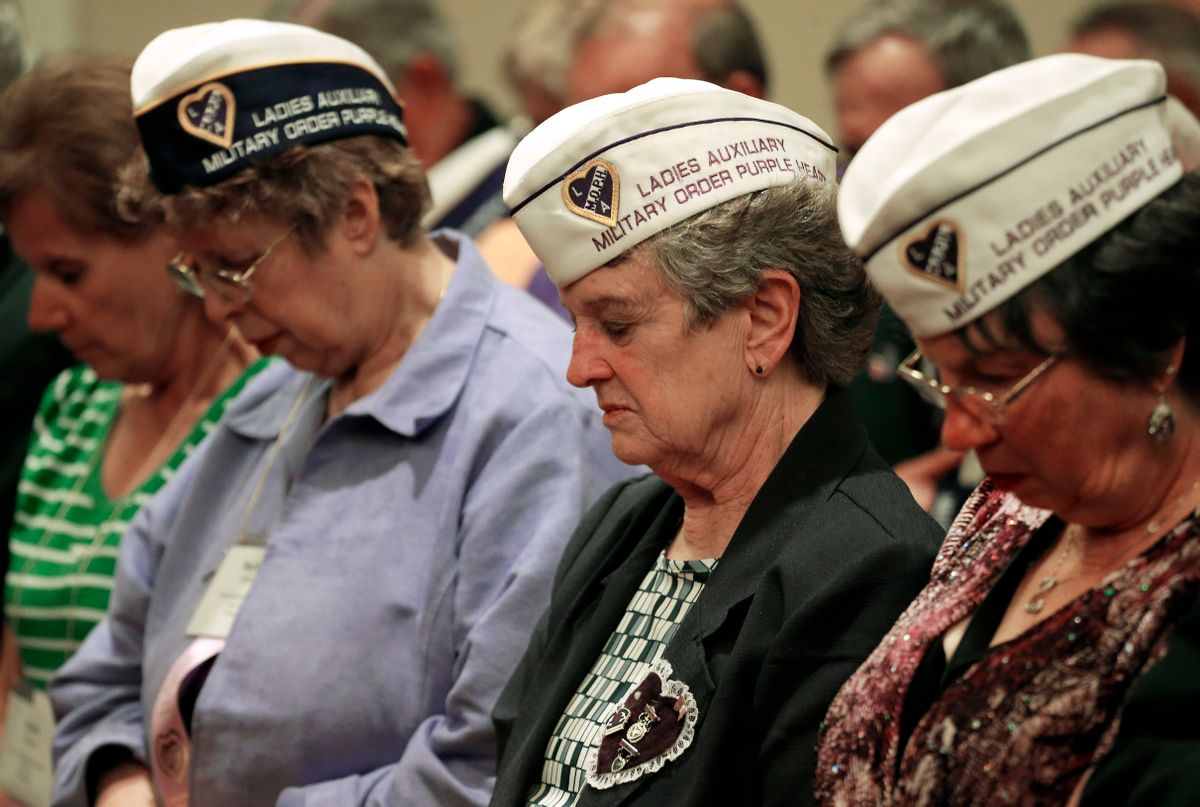 Attendees pray during the invocation at the opening of the National Order of the Purple Heart National Convention in Denver, Tuesday, Aug. 5, 2014. U.S. Veterans Administration Deputy Secretary Sloan Gibson says more employees will be disciplined as the department sorts out a scandal over long waits for health care and falsified data. (AP Photo/Brennan Linsley) (AP)
--

On Memorial Day and throughout the year, many Americans honor those who have lost their lives in the line of duty by donating to charities that help military veterans. It can, however, be daunting to choose from the more than 8,000 such groups operating nationwide.

Donor trepidation is magnified by the scandals that have embroiled vets’ groups. In fact, more than 10 percent of the charities tagged as “America’s Worst Charities” by the Tampa Bay Times and the Center for Investigative Reporting in 2013 focus on veterans.

The following four tips will help you vet these charities.

1. Learn what exactly the charities do

Be wary of vague statements about a group’s activities. While language indicating that a charity “supports” or “honors” veterans does not always signal a problem, it does mean you should seek more specific information. Many of the veterans’ charities that have faced criticism, such as Paralyzed Veterans of America and National Veterans Services Fund, have had vague mandates to educate the public about what veterans need.

A detailed description of a group’s mission and activities can instill confidence that veterans truly benefit from its work. An exemplary charity is the Honor Flight Network, which flies veterans to Washington, D.C. to visit military monuments and honor fallen colleagues. The benefits are self-evident, as I’ve seen firsthand as a flight volunteer. Fisher House Foundation, which provides temporary housing to families of veterans receiving treatment at VA facilities, is another good example. There are many ways that organizations can and do directly serve veterans. To find them, look for clear-cut programs you find meaningful and significant.

2. Find out what share of the money raised for organizations actually supports them

Another common pitfall: for-hire fundraisers that siphon too much of the donated funds.

Michigan’s attorney general determined that only 39 percent of funds raised by professional solicitors for charity in the state in 2016 actually supported those groups. The fundraising contractors kept the rest of the money. The picture is even more lopsided for veterans’ charities in the state, with only 23 percent of donations making it into their coffers. The track record in Michigan is no anomaly – New York, Massachusetts and other states have found similar patterns.

Professional solicitation is not inherently problematic – but outsourced fundraisers keeping most of the money raised for a charity is a real concern. The federal government does not track this information but most offices of state attorneys general maintain databases that indicate how the organizations raising funds in their states stack up. Since national campaigns also show up in these databases, even if your own state doesn’t make all the details easily accessible, you can use the online tools other states offer to evaluate different charities. New York’s database is especially user-friendly.

OK. I know perusing IRS forms is not everyone’s favorite activity. But it’s the best way to discover how donor dollars are actually spent. Finding a charity’s tax form is easy, even if groups don’t post them on their own websites, thanks to databases like Propublica’s Nonprofit Explorer and the Foundation Center’s 990 Finder.

If you do check out a 990 form, be sure to go to page 10. That’s where nonprofits classify their expenses, both by function and type. There, you can see where donated money primarily goes. If the organization has a stated focus on providing financial assistance to veterans, for example, you should see lots of grants to individuals on line 2, and not so much in the way of advertising, travel and postage listed on the other lines.

Consider how the Semper Fi Fund, a group that provides financial and other aid to injured and ill post-9/11 veterans and their families, stated its functional expenses for its 2016 fiscal year. The numbers indicate that the group spends over 90 percent of its funds on its mission. Three-fourths of that mission spending is direct grants to individuals – a good sign.

When you make charitable donations, you give away both money and personal information. What charities do with your personal data is part of the picture and how they handle this information varies widely.

Consider how the Wounded Warrior Project, among the nation’s most visible veterans’ organizations, has handled donor data. The group came under fire in 2015 and 2016 for alleged waste, as well as routinely selling personal information culled from its donors to other nonprofits and defending this practice. The controversy resulted in a shakeup at the top.

Other groups do a better job of protecting donor privacy. Fisher House Foundation, which clearly states a policy of not sharing or selling donor lists, offers a good example of how to do this. If an organization doesn’t state its privacy policy on its website, take the time to ask.

When it comes to vetting charities, a little work goes a long way. These four steps should help you find veterans’ charities with goals that match your own and that you can trust to make the most of the money you give away.