A Memorial Day Parade for the rest of us

Marching words across a page of honor 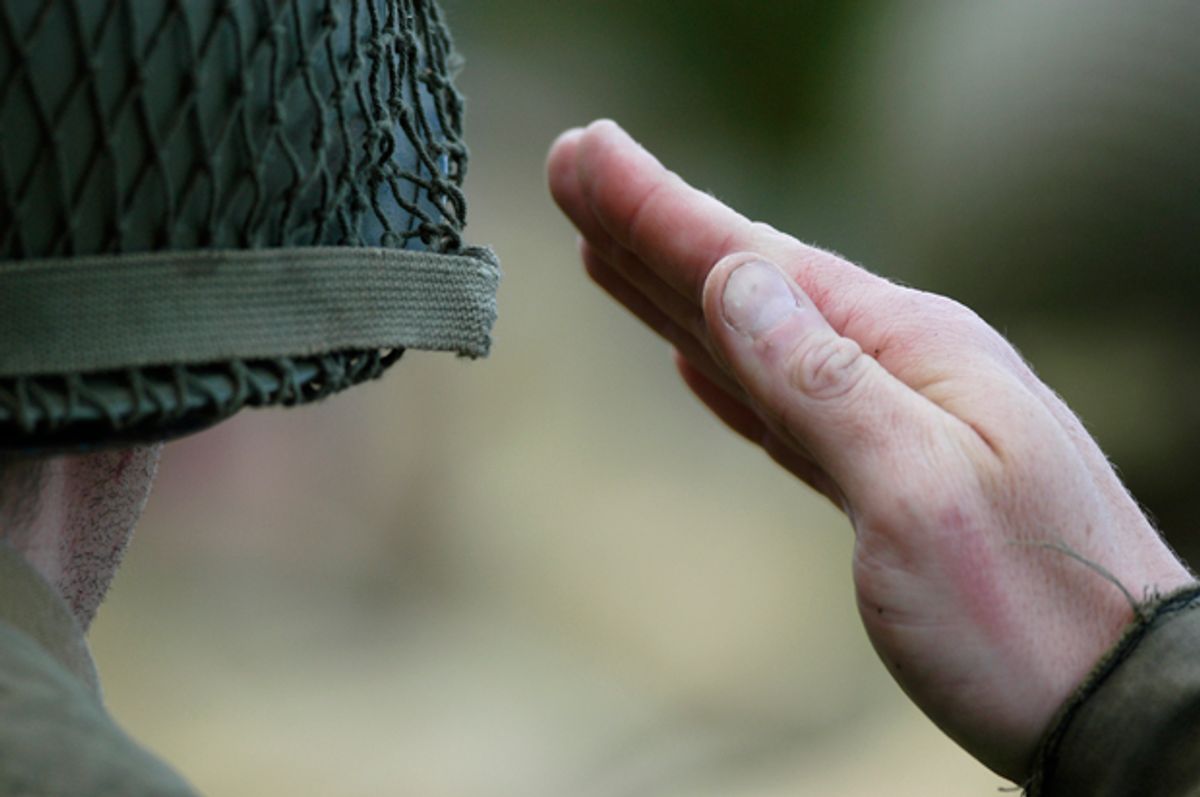 I picked up a guy hitchhiking some years back, passing through Tennessee somewhere between Bristol and Knoxville. It was late in the afternoon, and it had been raining steadily for hours. The guy was standing at the bottom of an entrance ramp on I-40 with his thumb out, soaking wet. I knew he was a military guy from the large olive-drab duffel bag lying at his feet. I pulled up, he threw the duffel in the back seat and got in. I asked him where he was going. “Oklahoma City,” he said. “Actually a little town near there.” I told him he was in luck. I was on my way to Albuquerque and could take him the whole way. He was a tall, skinny guy with a long neck and a big Adam’s apple and a hawkish nose, and he looked like he’d spent a lot of time in the sun during his life. He couldn’t have been older than 22 or 23, and there were already hints of crow's-feet at the corners of his eyes.

I asked him where he was stationed, and he said he was a veteran, just recently discharged from the Army on his way back home. He wasn’t very talkative. I didn’t blame him. I was probably 20 years older than he was, just another guy in a car on his way somewhere for some reason. Not much to talk about anyway. But he perked up when I told him I’d been in the Army, too, just about the time he was born. We swapped stories about where we’d been stationed, what branch we were in — Infantry, both of us — what a pain in the ass Army life could be. But there were the good things, too — the camaraderie among the troops, the close friendships you could make seemingly almost overnight because of the hardship you shared, the bullshit you put up with. There was something a little sad about the guy I couldn’t quite put my finger on until we stopped for dinner a few hours later. It was after he’d had a couple of beers that he told me he had left the Army with a bad discharge, one under so-called “other than honorable”conditions. I asked him what had happened and he told me. He had an asshole for a company commander who was always riding the soldiers in his company, citing them for every little infraction he could find. He was obsessed with his “numbers,” the metrics the Army used to measure success. How many speeding tickets? How many citations for drunk driving? How many went AWOL after weekend passes? How many picked up for drunk and disorderly? I knew exactly the kind of officer he was talking about, because I’d had a company commander just like him when I was in the Army at Fort Carson, Colorado. Guys like that ran companies where you could get in trouble just waking up in the morning.

His trouble started when his mother got sick and he went in to see the company commander and asked him for leave to go back to Oklahoma and check up on her. His leave was denied. He argued with the company commander, trying to get him to change his mind, explaining that his mother’s sickness was really bad. He was restricted to barracks for a month for insubordination. A week or so later, his mother died, and he asked for leave to attend her funeral. The company commander told him he was still restricted for insubordination and turned him down. He got mad, went to his mother’s funeral anyway, returned about a week later and was charged with AWOL, given a special court martial, reduced in grade, sentenced to three months in the stockade and discharged with “other than honorable” on his DD 214 official discharge papers. He had been in the Army for three and a half years, the whole time with a spotless record. Now he wasn’t eligible for VA benefits, including money for college, health care, or VA housing loans. Any potential employer asking for his DD 214 would see that it was a bad conduct discharge and probably not hire him. All because he went AWOL to attend his mother’s funeral.

I knew exactly what he was talking about because I had an “other than honorable” discharge, too. It was part of the unfairness of the Army system that if I had faced a special court martial as an officer, I couldn’t be sentenced to confinement in the stockade or discharged. My bad conduct discharge had been issued administratively, to punish me for something I had done while serving at Fort Carson. It was 1970, and I was an Infantry platoon leader with about 25 guys in my platoon, all of them either on their way to Vietnam or just back from the war.

Many soldiers returning from service in Vietnam were coming home with heroin habits, and I had several in my platoon. Within a period of about a month, one of my soldiers died from an overdose; one was killed, shot in the belly with a sawed-off shotgun in a drug deal downtown that had gone bad; and the third was a guy with a Silver Star, a Bronze Star and two Purple Hearts who I took to the Fort Carson hospital and tried to get admitted to a detox and rehab program the Army ran for alcoholics. The minute he said he didn’t abuse alcohol but he used heroin, they arrested him, threw him in the stockade and he detoxed cold turkey. He was given a special court martial, too, and was discharged under other than honorable conditions.

Me? I went all the way up to the two-star general division commander trying to get Fort Carson to institute an amnesty program so soldiers returning from Vietnam addicted to heroin could get treatment and leave the Army with honorable discharges. When the commanding general refused the amnesty program in order to cover up the fact that about 15 percent of his division was addicted, I sat down and wrote an article about the problems at Fort Carson. Because I had a top secret security clearance, I was made to submit anything I wrote for publication to division headquarters to be cleared. They held up my article, forwarded it to the Pentagon, and about five days later a three-star general threatened to punitively order me to Vietnam. I told him if he issued the order, I would refuse it and go public. Just under six weeks later, I was discharged.

The Army couldn’t cite the real reason for my bad conduct discharge because they were still covering up their heroin problem, so instead, in a final little dig, they put a code on my DD 214 indicating I had been discharged for being a homosexual. It’s still there. My father was horrified and when President Carter issued an order giving an amnesty for Vietnam-era bad conduct discharges, he called me up and told me about it and said I should file the paperwork and get my discharge upgraded. I told him no, I was proud of my “other than honorable” discharge. It was my Bronze Star for what I’d done as a lieutenant in the Army.

Bad conduct discharges were used during the Vietnam era to get rid of soldiers for all kinds of reasons. For AWOLs, for being gay, for objecting to the racism that was rampant in the Army, for various behaviors brought on by PTSD (which wasn’t being diagnosed at the time), even for getting too many speeding tickets. There were about 33,000 bad conduct discharges in the Army in 1967. By 1972, the number had risen to 88,000. A disproportionate number of them  were given to African-American soldiers. A book, “The African American Experience in Vietnam: Brothers in Arms” by James E. Westheider, explained things this way: “For many black veterans, 'bad paper' discharges were just another example of how the military used African Americans to fight the war and then sent them back to poverty and unemployment in an uncaring civilian society.” It was possible to try to get a discharge upgraded by filing an appeal, but such appeals were infrequent, most probably because they didn’t work. In 1970, military review boards turned down 95 percent of discharge appeals. Figures for other years in the Vietnam era are probably similar.

But the process is cumbersome, with complex burdens of proof needed to establish that the “bad conduct” in question was actually caused by PTSD resulting from combat. Few upgrades have been issued, so right now there are hundreds of thousands of veterans from our three most recent wars — Vietnam, Iraq and Afghanistan — walking around with military records which bar them from receiving VA health care and other benefits and which make getting employment much more difficult than it should be. According to the American Psychological Association, two-thirds of homeless veterans suffer from PTSD. The Wounded Warrior foundation estimates that there are more than 50,000 homeless veterans on the street on any given night.

I think I can pretty much guarantee you that if you attend a parade in your hometown on Memorial Day, none of the veterans you see out there walking down Main Street in their VFW and American Legion hats wearing old fatigue jackets festooned with unit patches will have received bad conduct discharges. And if you visit Arlington National Cemetery to see the American flags planted on the graves of the thousands of soldiers buried there, none of them will be on the graves of veterans with bad conduct discharges, because they are not eligible for burial in a National Cemetery reserved for veterans and their spouses. They aren’t eligible for military funerals, so neither the National Guard nor Reserves will provide an Honor Guard to present a folded flag to the family or a bugler to play taps or a rifle detail to fire a salute honoring the dead veteran. Dozens of veterans are buried every day without military honors because they had the misfortune of being discovered to be gay before the end of “Don’t Ask, Don’t Tell,” or they got drunk and went AWOL, or they protested against the racism of military commanders who made the lives of African-American soldiers miserable for many, many years.

Even though they served alongside the soldiers we celebrate on Memorial Day, many of them risking their lives in combat, decorated for bravery like my trooper at Fort Carson, we don’t hold parades for the soldiers with bad conduct discharges, and we don’t honor their service alive or dead. So this is my Memorial Day parade for everyone with a bad discharge. You served, too, so I’m marching these words across this page in your honor.