There's an object lesson in Harrison's accidental expansion of Yellowstone: In the end, it was a good thing 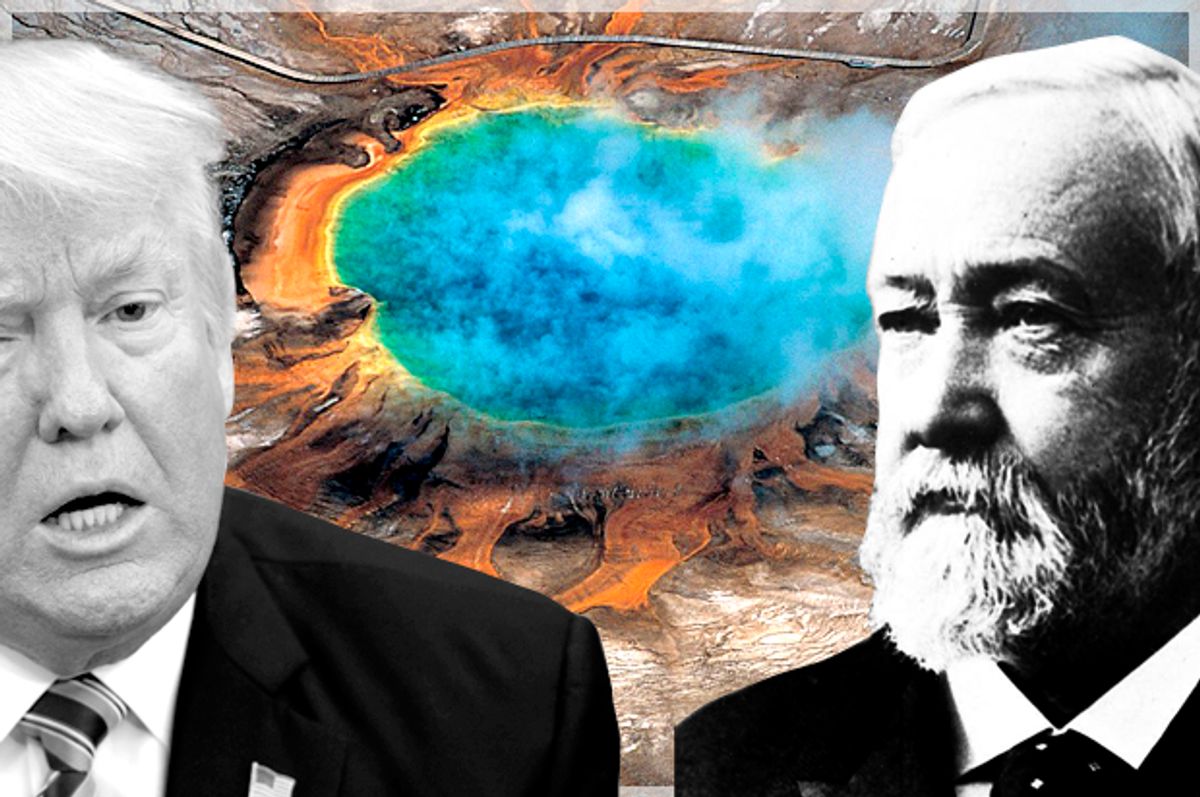 When President Donald Trump recently described the creation of 40 national monuments over the last 20 years as a “massive federal land grab,” it was another example of the hyperbole typical of his administration. Many analysts noted the legacy of Theodore Roosevelt, who signed the 1906 Antiquities Act and then spent two years bypassing Congress to create the first 18 national monuments. But the practice of executive-order land withdrawals actually dates back another 15 years before that, to a widely forgotten president and several now-unquestioned institutions.

In 1891, a House-Senate conference committee appeased a congressman’s interest in the emerging field of forestry by adding a last-minute rider to a broad public-lands reform bill. Most members of Congress, and indeed most conservationists, appeared to be unaware of its implications: it allowed the president to set aside "timbered portions" of the public domain as public reservations.

A week after its passage, the rider came to the attention of two advocates for Yellowstone National Park, geologist Arnold Hague and attorney William Hallett Phillips. They realized it could accomplish their long-held aim: to expand the then 19-year-old national park’s boundaries. With the approval of Interior Secretary John Noble, they drafted a proclamation setting aside the 1.2 million-acre Yellowstone Timber Land Reserve, immediately east and south of the park, using the expanded park boundaries they had proposed in previous legislative efforts. On March 30, 1891, President Benjamin Harrison signed it into law.

The move made complete sense. Naturalists, hunters and the Army personnel who were then in charge of the park had become increasingly concerned about Yellowstone’s wildlife. With bison, elk and other species rapidly disappearing across the West, the nation’s geological wonderland had an opportunity to also become a sort of last refuge for wildlife. To do so, it needed not only stricter anti-poaching enforcement, but also more habitat. Bills to expand Yellowstone’s boundaries, however, kept getting tangled in the Northern Pacific Railroad’s desire to lay tracks through the park. This proclamation bypassed that stalemate.

Acreage-wise it may not have been history’s most “massive” federal land grab. But because it was the first, and because most congressmen hadn’t even been aware that they had given Harrison this tool, it was the most audacious. And it was quickly followed by more of the same. Harrison went on to preserve 12 million more acres in reserves, and his successor, Grover Cleveland, another 25 million acres. But there was a catch -- indeed, an almost fatal flaw. Since the 1891 law had not indicated what the purpose of the reserves should be — nor how they should be used, administered or funded — all uses were effectively prohibited.

Talk about your job-killing restrictions! The forest reserves permitted no homesteading, logging, grazing, mining — or even trespassing. Congress, caught in the crosswinds of multiple special interests, continually failed to resolve the issue. Even a blue-ribbon commission from the National Academy of Sciences — with luminaries including Gifford Pinchot and John Muir — couldn’t decide: Military or civilian administration? How much logging to allow? What about grazing? They could agree how to identify wonderful forests, but not how to sustain them.

On Feb. 22, 1897, President Cleveland followed the commission’s recommendation to create, under the same terms, 13 new reserves totaling 21 million acres. Furious Western congressmen attached a rider to a general appropriations bill to eliminate the entire forest reserve system. Cleveland, on his last day in office, pocket-vetoed it.

Rather than rescinding Cleveland’s reserves, the new President, William McKinley, called a special session of Congress. The resulting compromise allowed the government to continue functioning while delaying implementation of the newest reserves. It also established criteria for setting aside and managing reserves. That law, as interpreted by the increasingly powerful Gifford Pinchot over the next eight years, led to the U.S. Forest Service as we know it today.

History then suggests two lessons for our own time. First, such seemingly imperious set-asides have, and will continue to, generate backlash. In his remarks alongside President Trump, Interior Secretary Ryan Zinke highlighted the fact that some local communities view these designations negatively. Of course they do! If they didn’t, the national monument in question would instead have easily gained congressional approval to become a national park.

Second, in the long run, these actions are usually judged to be wise. For example, one of Harrison’s contentious forest reserves was the Grand Canyon, which later gained congressional approval as a national park and today is among the park system’s crown jewels. And the old Yellowstone Timber Land Reserve? Its lands are still national forests, now reorganized and expanded still further — indeed, much of the old reserve is now a congressionally mandated, restricted-use wilderness.

It would be nice to think that Trump’s “land grab” rhetoric — playing to his supporters’ resentments with little appreciation for history — will fail to make a difference. But his actions do represent a threat to the policy and meaning behind all of our public lands. And this is where Benjamin Harrison’s story also becomes a cautionary tale: Even a mediocre president, lacking understanding of legislation that he himself has signed, can leave a lasting legacy.

John Clayton is the author of "Wonderlandscape: Yellowstone National Park and the Evolution of an American Cultural Icon," just published by Pegasus Books.