With its persuasive imagery and blunt message, even a climate skeptic will find this ad campaign hard to ignore 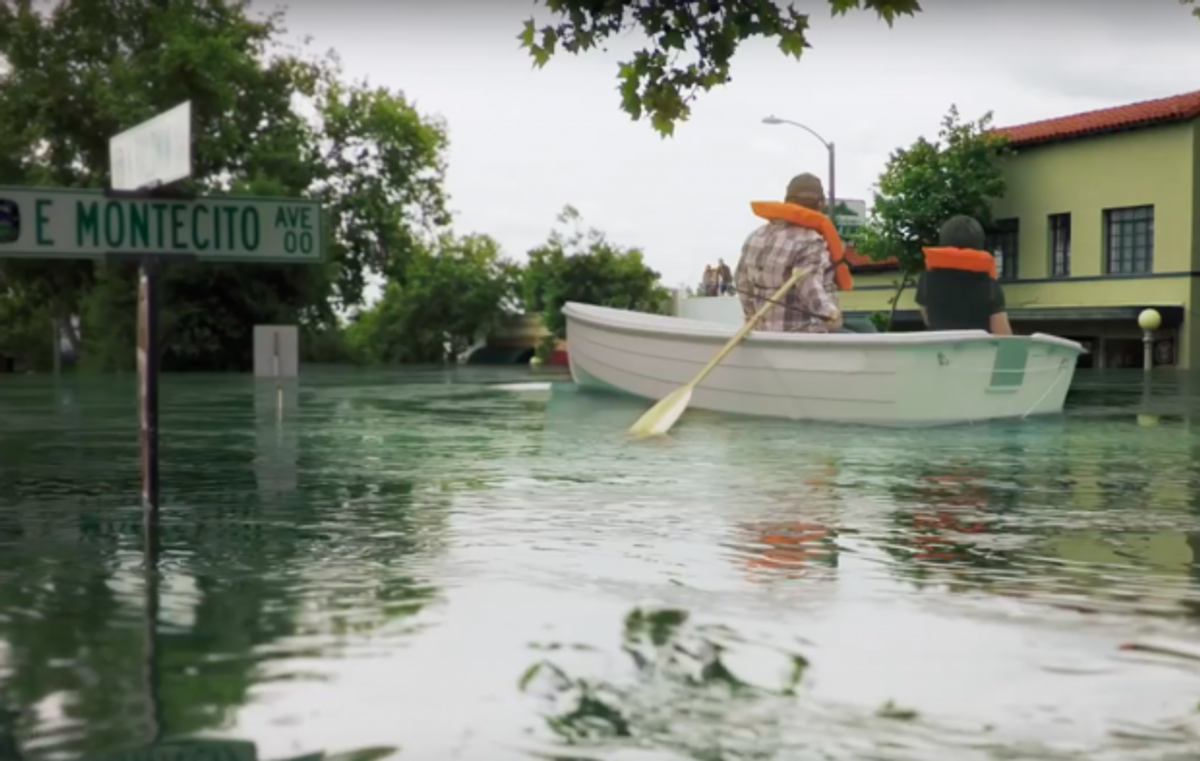 (The Partnership for Responsible Growth/Youtube)
--

With fossil fuel-loving climate deniers in the White House, Congress, the president's cabinet and federal agencies like the EPA, the swamp Trump promised to drain has become an environmental disaster zone. But a new series of television ads will begin running in the nation's capital Tuesday to make the case to policymakers that not only is the climate threat real, there's a market-driven, pro-growth solution to the crisis that could get bipartisan support.

Sponsored by the Partnership for Responsible Growth, which according to its website, "advocates for pro-growth tax policy addressing the challenge of climate change with carbon-funded tax cuts," the initial series of five ads makes a general call to both parties in Congress to protect the country from the impacts of climate change. Undescoring that time is of the essence, the ads come on the heels of an alarming new report by the Arctic Council, an intergovernmental scientific policy forum, that concludes the Arctic could be free of sea ice by 2040 — three decades earlier than previously thought.

During a press call Monday, David Fenton, the founder of Fenton, the social change communications agency that produced the ads, said the new campaign is meant "to bring the truth about climate change to the Washington bubble . . . where pretty much all you ever see on television are ads from the fossil fuel industry about how great fossil fuels are for the country. That leaves out the impact of using them." He added that the ads are an effort to "redress the balance."

The first two ads in the series focus on how 97 percent of climate scientists are in agreement that global warming is caused by human activity, and how climate change is not some future problem, but is impacting Americans right now. Each ad will run about 50 times during the week on Fox News, CNN and on "Morning Joe" on MSNBC — stations and programs President Trump is known to watch along with his staff.

The ads aren't simply urging policymakers to make the transition from fossil fuels to a low-carbon energy system based on renewables, as many environmentalists want to do. The underlying argument is one Trump might be more likely to understand: Fighting climate change can be done through a market-based strategy that could also be used to help pay for the president's massive tax reform scheme: carbon pricing. The ads urge viewers to learn more about this "free market solution to climate change" by visiting pricecarbon.org.

"Both the White House and House Republican leadership have promised to advance a massive tax reform plan which could add anywhere from $4-7 trillion over 10 years to an already mushrooming debt, with absolutely no proposals for how to pay for it," said George T. Frampton, Jr., co-founder of the Partnership for Responsible Growth, the ads' sponsoring organization, during the press call.

"Revenue from a carbon excise fee on carbon fuels could provide $2 trillion or more as a pay-for for tax reform," he said, noting that "there's a real appetite among Republicans in the House and Senate to try to do some sort of a major deal on tax reform that would address the climate challenge through a market-based, pro-growth solution." Frampton, who served as Chairman of the White House Council on Environmental Quality (CEQ) under Bill Clinton, pointed out that one of the things holding back this solution is the climate denial that is running rampant throughout GOP leadership and that "it will cost a lot more to address it every year we wait."

The ads have garnered support from conservative and evangelical groups that advocate a free-market carbon pricing approach to address the climate challenge. This method, favored by many economists for reducing global-warming emissions — including Harvard climate economist Martin Weitzman and American Economic Association president William Nordhaus — charges carbon dioxide emitters with a carbon price, an amount that must be paid for the right to emit a ton of the greenhouse gas, usually in the form either of a carbon tax or cap-and-trade, a system that imposes a requirement to purchase permits to emit CO2.

While carbon pricing may sound like a good idea, it has its detractors. Kenneth P. Green, an environmental scientist and director at the Fraser Institute, a conservative/libertarian public policy think tank based in Vancouver, outlines six reasons why a carbon tax is a bad idea, one being a negative impact on the poor:

Poorer people spend a higher portion of their household budget on energy than do the better off. If you were to posit redistributing the tax to the poor, you could deal with this, but if your tax is just a new revenue stream for government (which it will become sooner or later regardless of the initial design), higher energy costs and higher costs for goods and services are going to slap the lower-end of the income spectrum hard.

Green also argues that "new carbon taxes would represent double-taxation. You’re already paying carbon taxes in the additional costs of new vehicles with higher fuel emission standards, more expensive appliances that aim to conserve energy, renewable energy standards that raise your cost of electricity, etc. … Carbon taxes may look good as an abstract exercise in economics, but in the real world, like other eco-taxes, they would quickly morph into just another form of taxation that feeds the ever-hungry maw of big government."

In a New York Times opinion piece, Cornell University economist Robert H. Frank admits that "if such a tax were phased in, the prices of goods would rise gradually in proportion to the amount of carbon dioxide their production or use entailed. The price of gasoline, for example, would slowly rise by somewhat less than $3 a gallon." But this might help get drivers into cars that are not as carbon-intensive. "Motorists in many countries already pay . . . much more than Americans do, and they seem to have adapted by driving substantially more efficient vehicles," he says.

In a U.S. News & World Report op-ed, Chad Stone, chief economist at the Center on Budget and Policy Priorities, a left-leaning think tank, also admitted that a carbon tax "raises the price of energy and other goods and services that compose a disproportionately large share of low-income households' budgets." But, he also noted that it "raises revenues that policymakers can use to offset that hit to the budgets of those low-income households." Of course, whether or not the revenue raised by a carbon tax is redistributed to the poor would remain to be seen.

Cap-and-trade, the other common carbon pricing scheme, also has its doubters. "Restricting carbon emissions by cap and trade is probably not a good idea even in a booming economy," writes Sergey V. Mityakov, an economist at Clemson University. "On the one hand, consumers are going to suffer directly from the increased prices of the energy and energy-intensive goods they buy. On the other hand, higher energy prices will increase the production costs of American producers, making American-produced goods less competitive in the world market."

Still, for some environmentalists, just getting Trump and the rest of the head-in-the-oil-sands GOP to start facing the harsh reality of climate change could be a good thing. Putting a price tag on carbon emissions has its pros and cons, and if Congress were to contemplate some form of carbon pricing legislation, its ultimate ramifications beyond reducing emissions could be properly hashed out in a public forum. In the end, it's not about the tool, but how one uses it. As Stone points out, carbon pricing's "net impact depends as well on how policymakers use the revenue."

"The case for climate action . . . global warming . . . industrial emissions being the main driver — they come through multiple lines of evidence; it's not just computer modeling that suggests these things are true," argued Taylor. "If global warming isn't happening, then virtually everyhing we know about physics is wrong. These ads do a valuable service in establishing some really basic degrees of knowledge that we have to work from to have an intelligent conversation."

A discussion about climate policy based on science, facts and evidence? Now that's something anyone concerned about the climate can agree on.